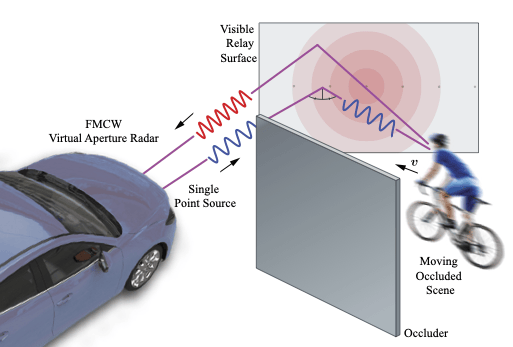 New radar system detects motorbikes and bicycles around the corner

Princeton University is currently working on a radar system that detects approaching road users “around the corner” and can warn drivers of this.

The system uses a Doppler radar to bounce the radio waves off other surfaces such as buildings. The computer unit can thereby calculate an image of the vehicle’s surroundings and also recognize other road users in the immediate vicinity, even if they are not in the direct field of vision. The system also recognizes whether the “invisible object” is in motion and can therefore also warn of a possible collision.

The system has already been tested with bicycles, which means that it should also recognize motorcycles.

Professor Felix Heide: “This system enables cars to see hidden objects that today’s radar and camera sensors cannot detect. For example, a self-driving vehicle can see around a dangerous intersection.”

The radar sensors are said to be relatively inexpensive to manufacture and therefore well suited for the mass market. However, the system still had to learn to reliably recognize cyclists and pedestrians using a very small amount of data. One have to first recognize that something is “around the corner”, then whether it could be relevant and finally what it is.