MotoGP is back with a furious race

4 min read
Fabio Quartararo celebrated his first victory in MotoGP. Marc Marquez - unbelievable save, catching up and bad luck after another crash.

Fabio Quartararo celebrated his first victory in MotoGP. Marc Marquez – unbelievable save, catching up and bad luck after another crash.

In the first race of the MotoGP 2020, only 20 riders could start. Alex Rins (Suzuki) had to cancel the race due to his fall in Q2. Cal Crutchlow (LCR Honda) was also unable to start because he crashed in the last minute in the warm-up and was declared “not fit”.

Quartararo started from the pole, Vinales on two and Marc Marquez on three. Vinales won the start, but Marquez also quickly moved up to second place.

After a lap, Joan Mir (Suzuki) dropped out after crash on turn 9. Shortly afterwards, Aleix Espargaro crashed the same way.

Marquez was able to take the lead from Vinales, but had to struggle with problems because he always had some slides. He had to show his unbelievable ability after losing the front wheel in turn 4 on the fifth lap. He was able to save the fall and crossed the gravel bed at around 160 km/h. Here, too, he could prevent falling, but the ride washed him to the end of the field.

Although he continued to struggle with slides, he plowed through the field and worked his way forward.

At the top, Vinales had a brake error and had to relinquish the lead to Quartararo. Miller also came through the driving error.

Halfway through the race, Marquez was already back in the Top10 and permanently drove the fastest laps in the field. Quartararo was able to break away from the field

Valentino Rossi apparently had a technical problem and had to give up seven laps before the end of the race.

Marquez passed Jack Miller, who had meanwhile lost second place to Vinales. Despite some resistance, Marquez was able to maintain third place and prepare for the attack on Vinales.

However, he had an highsider in at the entrance of curve 3, which meant the final end of the race for him. He injured and held the right wrist.

Quartararo had now got a comfortable lead. Vinales also seemed sure of second place. Third place on the podium was contested by Miller, Andrea Dovizioso, Franco Morbidelli and Pol Espargaro. In the end, Dovizioso prevailed.

Quartararo got his first victory in MotoGP.

According to the first reports, Marc Marquez broke his upper arm, an operation seems to be necessary. It is said he not to have sustained any other injuries. He will now be observed for around 12 hours, transported to Barcelona on Monday and then operating by Dr. Mir.

The fracture is very close to a nerve. It has not yet been possible to determine whether this was also injured. It is quite possible that Marquez will be out for a while. 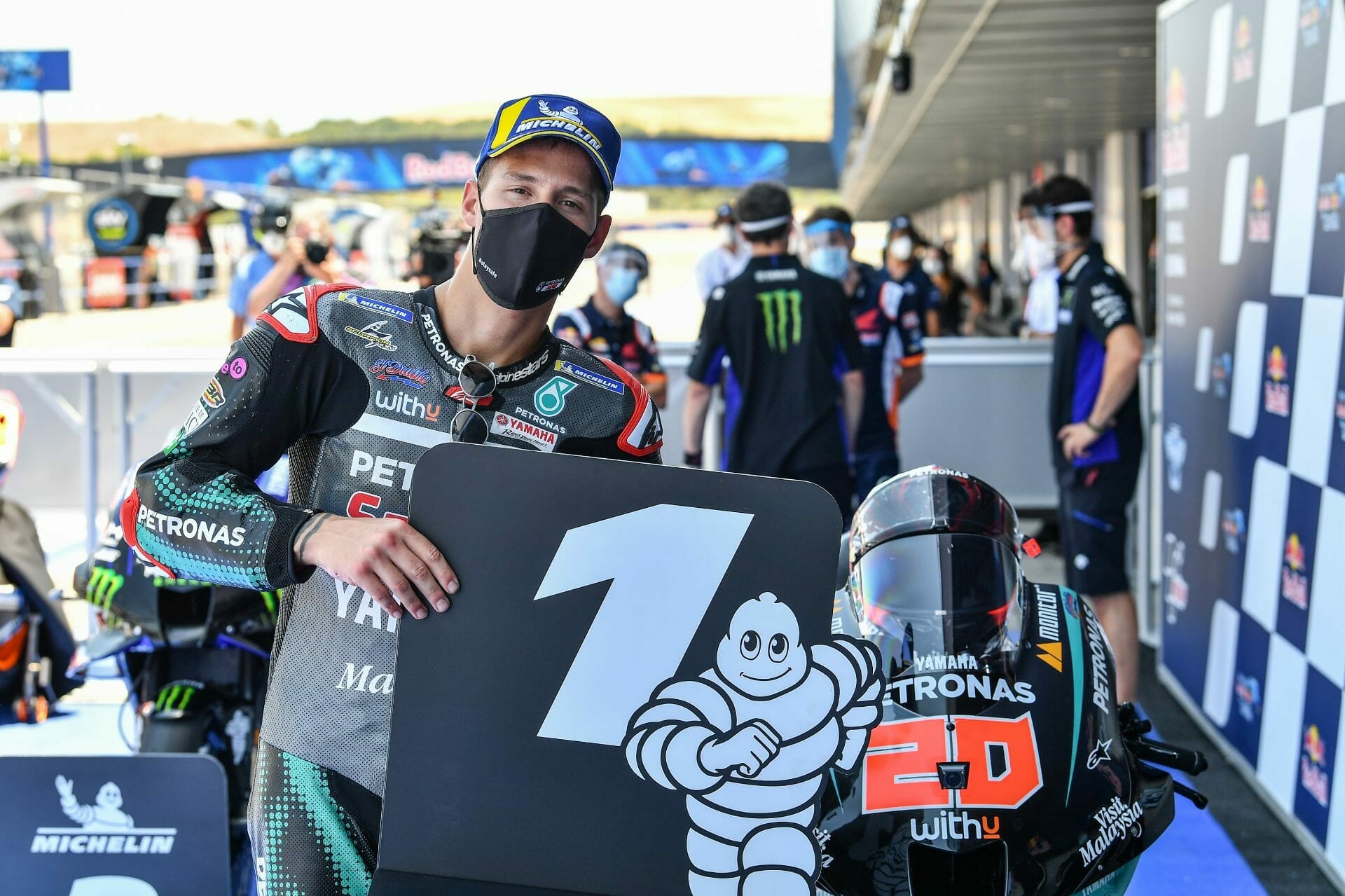