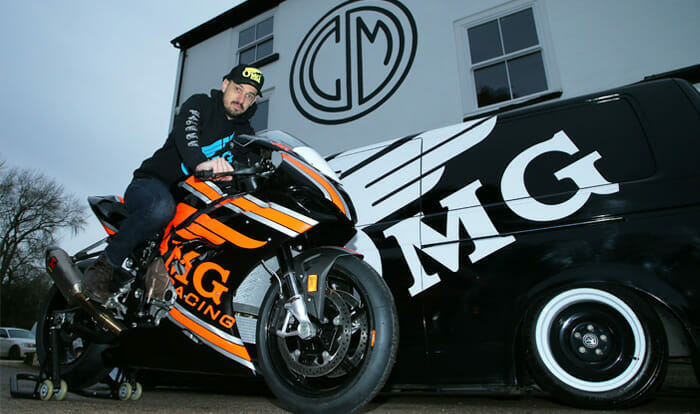 In 2020, OMG Racing from Staffordshire will start for the first time at the Isle of Man TT. As drivers they could be hired James Hillier and David Johnson.

The team was founded in 2018 and has driven in the British Championship so far. At the Isle of Man TT, Hillier and Johnson will compete in the RST Superbike, Senior TT and RL360 Superstock races with suitably prepared BMW S1000RR. In the Supersport class, the Yamaha R6 is used.

Hillier has reached 14 podiums and one victory (Lightweight TT 2013) since his debut at the TT in 2008. After ten years with Bournemouth Kawasaki, he is now moving to OMG.

The Australian David Johnson was the TT’s fastest newcomer in 2010. He achieved an average lap time of 128,838 mph. In 2014 he narrowly missed the podium with a fourth place. In 2018 he did this feat in every race of the TT – he finished fourth in all races. In 2019 he finally made it to the podium with a third place for Honda Racing.

James Hillier:
“I’m really looking forward to a new chapter in my career for 2020 with OMG Racing and riding the new BMW S1000RR and Yamaha R6. Making the decision to leave Bournemouth Kawasaki, after a really great 10-year relationship, wasn’t one I took lightly. There are lots of challenges involved in moving teams and starting new relationships. I’ve had an affinity with Kawasaki for 14 years now and switching machines throws up its own challenges, but I’m really excited by it all. OMG Racing are putting together a strong package around me, I’ll be working with a Crew Chief I know, and very closely with the team to develop the bike. With any kind of motorsport, knowing when to make changes is pivotal to success. It’s definitely the right time for me to make this move and I can’t wait to get started!”

David Johnson:
“I’m extremely happy to sign for OMG Racing for the 2020 roads season. They are an amazing bunch of people who are dedicated to their racing and put their riders front and centre. The bikes will be top notch, they’re a no-holds barred team when it comes to assembling the best bits of machinery and I’m sure that they’ll be able to deliver a bike capable of winning. Currently I’m still back at home in Australia, but the stars seem to be aligning for next year, with my wedding to kick things off and then heading back over to the UK to get myself focused on the bike. 2019 was a great year for me, finally getting that first TT podium, so I’m certain I can follow that up with more in 2020. A Big thanks to all the team at OMG Racing, but especially Alan Gardner and Paul Curran for giving me this opportunity. I can’t wait to be back!”

Paul Curran, OMG Racing Team Principal:
“This is obviously a huge announcement as we prepare to take on our first ever roads season as a team. Road racing is something which has been on our radar for a while now but was a big investment in terms of time and resources, the team ownership agreed that it was something we couldn’t pass up on though – so it became a case of assembling a team capable of winning. Our focus and commitment to British Superbikes won’t be changing, so our supporters can expect us to give 100 percent to both the BSB and the roads across the season. We have some vastly experienced people coming on-board to help us develop behind the scenes. We’re not competing just for the fun of it, we’re racing to win and to shake up the road racing competitions as we have done on the circuits.”

Alan Gardner, OMG Racing:
“Since I was a boy I’ve been a fan of the Isle of Man TT, but never in my wildest dreams did I think I would get the opportunity to be a part of this historic and prestigious event. As a team, OMG Racing doesn’t do things by half measures, so securing the right riders was pivotal. We’ve worked with them to grow our team, based in Cannock, into attracting one of the very best road race crews in the country. It was also important that we ran the right bike, so the BMW S1000RR was the obvious choice. The support we’ve had from Paul Phillips has been fantastic, and I want to thank him for the help and guidance. There are so many great road racers, we want to give them another option, with bikes and teams built around their needs. A happy rider is a fast rider after all! We know that we’re a new roads outfit, but we’ve spent our entire time in British Superbikes proving people wrong, and we ended up winning our first race in just our second season. So, who’s to say what we can achieve in our debut roads season?”