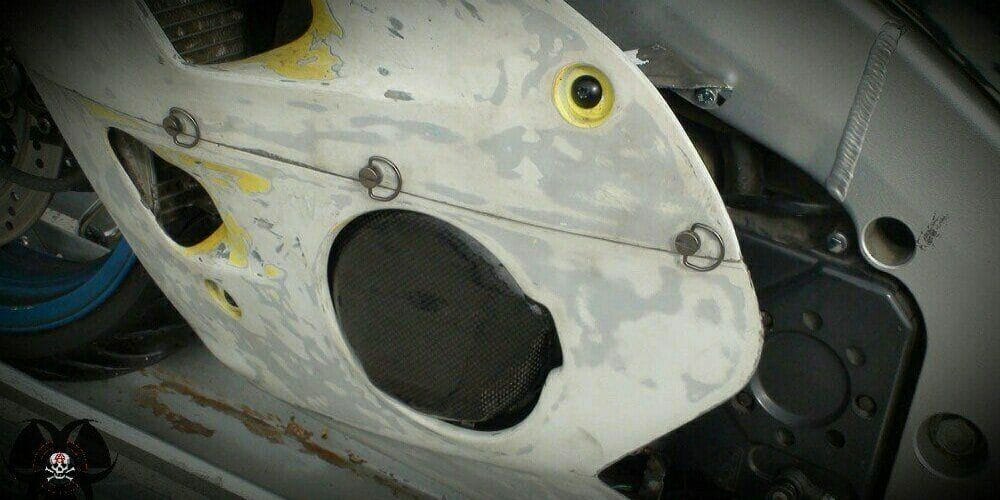 from the racetrack, Garage / Tuning

Time to make the racing machine fit, the first use threatens

My inexpensive ZXR 400 I’ve already presented and also explains why it may be ideal for use on the racetrack. Now it is time she really prepare for it, since the first deployment is imminent.

The machine standing at the previous owner very long and lacked many screws. Some time ago I had ever tried to install the fairing and partly to supplement with quick release buckles. But completely pulled through I have not had the time. So I wanted this first finish.

The correct Fairing Screen for track use

[sam id=”2″ codes=”true”]For the road I prefer a normal little Fairing Screen is tinted as dark as possible. Looks optically simply the best and fits every trim color. On the track, that’s beside the point. Here should be seen through the windshield, can hide behind their slipstream. So there is no other choice than to use a clear Racingscreen. This is further pulled up as an original mold disc and also has a slightly different shape. I’ve made my decision for the company MRA, which also supplies the MotoGP. 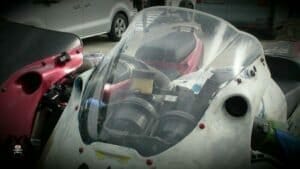 Included is the windscreen, the approval of the road (on the track is not necessary) and a protection for the upper edge of the pane. To attach the racing windscreen I’ve got at Racefoxx suitable screws. If you have not yet viewed the washer fitting precisely, here are nuts enclosed in a rubber sleeve. This you can easily plug into the Fairing holes and screwing in the aluminum screws (got me for red decided) sitting the slice firmly to the Fairing, since then pressing the rubber sleeves.

Fairing sat, so let’s see whether still life stuck in the little ones. Oh, if I had not yet written to the idea: The fairing I’ve only briefly sanded and coated with matte clear coat. The look should be preserved

Must be that the carburettor cleaned, was already announced me. So expanded, screwed and cleaned in a hurry. For an accurate cleaning I lacked the time and I was hoping that this is enough. Was not it unfortunately. The carburetor installed turned the engine only. Do not restart. Eventually there was only once a misfire. Later often

I never imagined then only times viewed the spark plugs. Although they were flooded, but otherwise looked good. So dried and reinstalled.

The carburettor came back out, I tried to make the basic settings and adjust the idle speed. Must be running in order to synchronize the carburetor of the engine. After reinstallation of the engine would not start again. Since I’m never driven with the machine and could not rule out that something else is wrong, I have the carburetor out of my road bike and planted in the racing machine. And lo and behold, the motor is not still started

I have the spark plugs still taken time out, which were flooded again by the previous launch attempt. Was clear and I’d have guessed. Since I had are currently what, and to play it safe, I have them exchanged for equal Iridium candles. Everything reinstalled and connected, pressing the starter button and the little girl immediately jumped on and purred like a kitten. Me has fallen from the heart a stone.

The whole installation and removal took me damn lot of time, but now the worst was over, or ??? 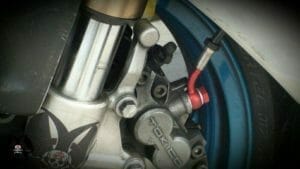 Since I’ve never driven with the race-ZXR one meter, I wanted if possible the same driving feel as in my ZXR 400 for the road. I wanted to get along with her only once, you can then make changes still. So I had the things that have been changed on my streets ZXR, change to the racing machine. The brake levers were therefore changed. In order to achieve a clean and clear braking point I changed the brake pipe with steel flexible layout. After necessary tire change I wanted the brake fill, vent and test.

The footrests I with the “cheap” version offset slightly upwards and backwards. Cheap variant is not a new footrest, but the accessory joints which can rotate to the corresponding position.

Only new tires and then finished?

– I thought at the time, so expanded the tire. Quite soon I realized this that some screws were missing on discs. The remaining screws times exactly viewed – clear why the were still there. The Allen could not really fix it. On the fly still ordered a complete set of screws for brake discs and driven to the tire changes.

After a few beers, changing the tires and removing the remaining screws (stamped Torxeinsatz and screw turned out) was then only times closing time.

The next day I then realized that the fork is leaking. So front tires placed on the page, removed your fork and installed new oil seals. When the tire inside, the brake discs solid again, the brakes were filled with fluid and vented, almost everything should already be good. Set the chassis only on the usual setup and make ne small test drive.

Well, on the left fork I could screw around 30 clicks turn (would normally 12 or 13, I know exactly that just does not), and right there were no clicks. But I could adjust to incredible 1.5 turns. The adjustment also already looked so funny. So was over everything, and I idiot Exchange nor oil seals…

Well, a test drive is already showing whether for a training goes. If necessary, I would have been able to take the fork to my road machine, but it would be a night shift have been necessary, and the next morning it should go.

So let’s get out of the garage and only times the brake and so yes also tested the fork. Delays did not really have much. It was really horrible! The pads were still very much covering, but delayed as good as not. After replacing the pads, it was fortunately much better. Again some time lost but ok. Brakes are important.

Positioning of the cams

To let you participate and to see how I crappy on the track down still had the cams are mounted. I’m looking for a cam on the antlers, a rear decided on the cusp, one under the hump and a forward. The attachment was not always easy, since the racing fairing is not quite as stable as a normal Fairing. Stabilizing parts such as the headlight is missing, too, but it worked.

After that was done standing the test drive nothing in the way. As the little girl running? How they can connect through? Can turning out the engine or not yet determined what? Adjust the cams so, or you see anything? 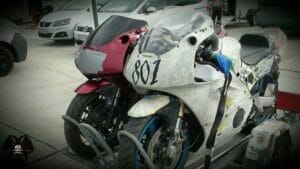 Of course it started to rain at this time. New road tires on the racing machine, probably about 100 m had gone now, and then rain. No matter, so be careful going down and the engine only once warm. It looked and felt everything quite well. Sometime a few courses completely unscrewed and whoosh I went at once stern and Little’d almost thrown me. I popped the knee almost straight course to the ground and so did the load to stabilize again. In addition to the machine I’d be hanging almost went off the road, but it has yet to stabilize in time. I got back on it and swung on it went. Only a little more smooth …

I’m an idiot! I had enough time to do everything alone and done has to start at the last minute in order. Clear not everything goes as planned so, but it was already scarce. From the fork I have not noticed anything during the test drive, so hope that it is ok (for one day).

Test drive with tires which are not even in the rain approached – bad idea! Now I go to bed and tomorrow morning to Hungary for Pannonia Ring. Actually I wanted to study the route via video, since I was there so never and I am anyway not yet moved freely on the racetrack but sleep must also be … I’m already the pin …. 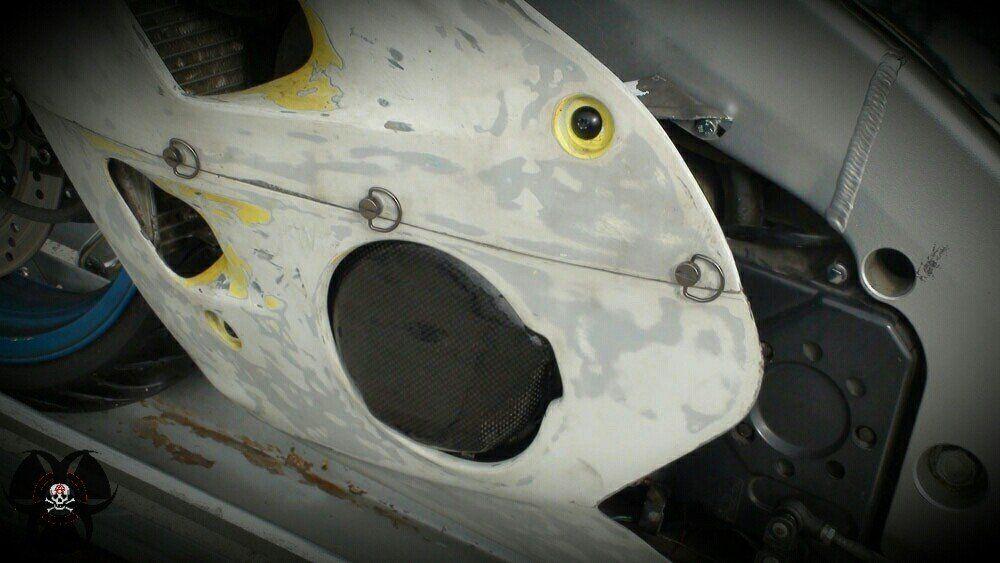