3 min read
During the Ducati test for the MotoGP in Jerez, the Panigale V4S was also allowed to show what it can do. Only 2.2 seconds separated the street bike from the best time of the MotoGP Ducati.

During the Ducati test for the MotoGP in Jerez, the Panigale V4S was also allowed to show what it can do. Only 2.2 seconds separated the street bike from the best time of the MotoGP Ducati.

The Panigale V4S achieved a lap time of 1:43.3 and the MotoGP GP21 1:41.1, which is 2.2 seconds difference between a bike you can buy for the street and a MotoGP prototype.

Was the V4S extremely tuned?

Claudio Domelicali wrote about it on Twitter: “Two Panigale V4S hunting the Motogp in Jerez: the Pani best lap was 1’ 43.3 vs 1’ 41.1 of MotoGP. Both on Michelin slick tires. Just a bit more than two seconds separates the fastest bikes on earth to a bike you can buy at your local Ducati dealership! Really impressive!!”

Asked if the V4S has been modified, he replied, “The Panigale are all stock bikes as you can buy on your local dealer, with additional accessories taken from the Ducati Performance accessory catalogue. Most important are the racing exhaust and the raised footpegs kit. Some added a thumb rear brake. Then add talent and training!”

How fast were the others?

Some also asked about the performance of the other MotoGP prototypes; after all, it was possible that Ducati had taken a development step in the wrong direction with their MotoGP bike and were therefore rather slow.

Claudio: “There were other MotoGP bikes on the track and they weren’t faster. The track was not good, it rained all day before and also in the morning …”

This statement puts the tight times into perspective a bit, because when the track is bad, the power can’t be put on the track very well. As a result, a higher horsepower motorcycle is at a slightly greater disadvantage than a lower horsepower motorcycle. If you compare pure horsepower, then the bikes should probably be 80 to 100 horsepower different. Nevertheless, it remains very impressive what the Panigale V4S is capable of. 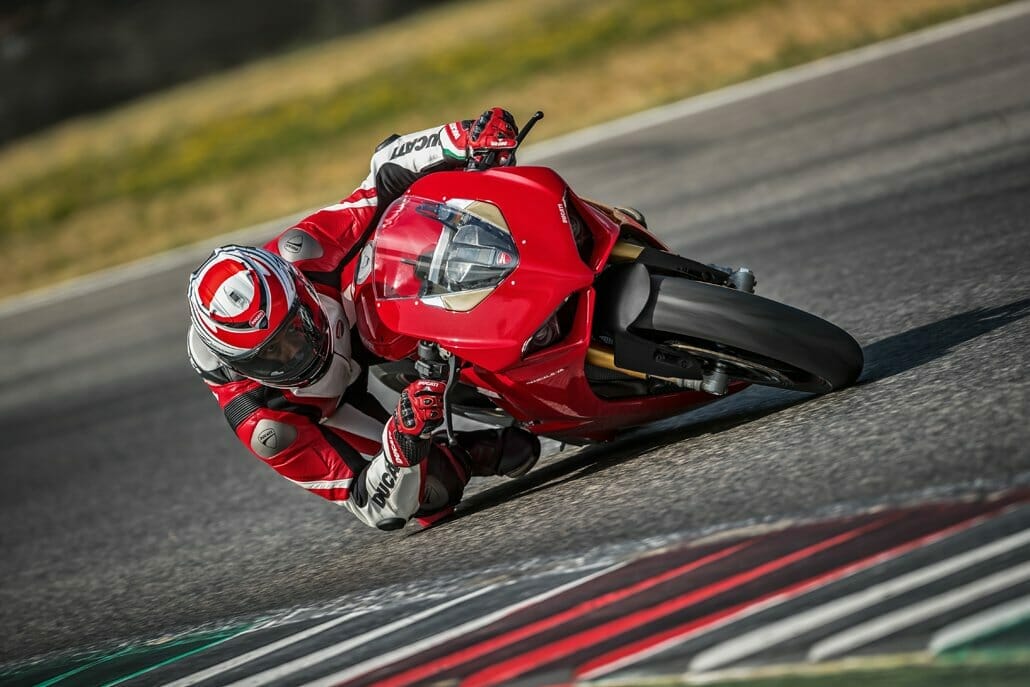