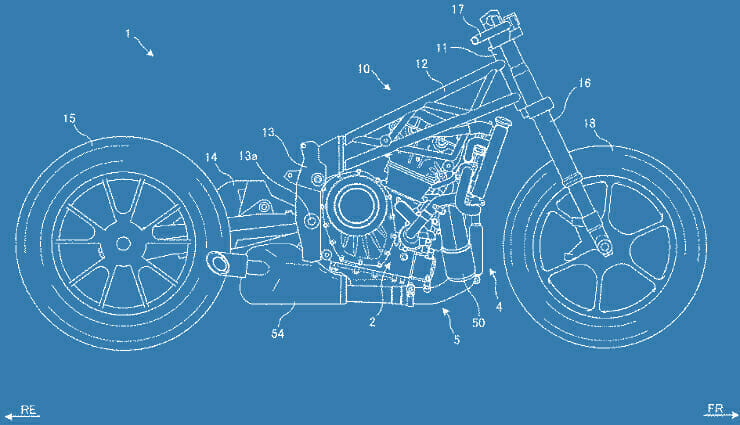 Since Suzuki presented 2013 the Recursion Concept Bike with 588cc SOHC parallel-twin and turbocharger, one waits for an appropriate publication.

The lightweight motorcycle should have around 100 hp and a huge, turbocharged torque. In 2015, the XE7 engine was exhibited at the Tokyo Motor Show. It was a further development of the engine from the Recursion.

The SOHC has been replaced by a DOHC layout. After that it became quiet about the project.

Now new patent applications have emerged, showing that the engine is adapted to the current emission requirements.

Specifically, it is about how the catalyst is placed without compromising aesthetics or cooling performance.

It can be seen that the catalyst (50) was positioned as close as possible to the turbocharger and the turbo near the exhaust port of the cylinder head. So the turbo should be driven as fast as possible and transfer the heat to the catalyst to bring it to operating temperature.

Whether and when the engine will really hit the market and whether the Recursion Concept Bike really does appear remains open.