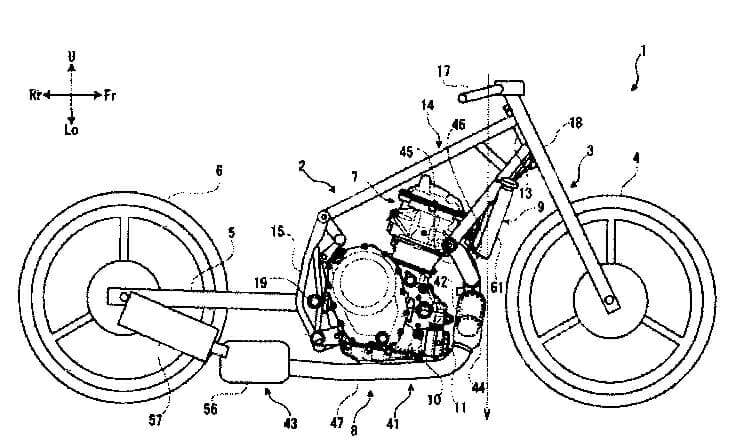 The patent was filed in Japan last year, but work on it has been ongoing for some time. So far the engine has not yet made it into a production motorcycle, but the DOHC twin “XE7” was presented at the Tokyo Motor Show in 2015. At that time the 700cc engine was equipped with a turbocharger.

With or without turbo?

In the meantime, it seems that turbocharging has been abandoned, or one would like to be able to use it in different variations, because the engine can now be seen with a normal intake. It could replace the V-Twin of the SV650 in the future, as current and future emission regulations place increasingly strict demands on engines.

Row cylinder instead of V-shape

Instead of a V-shaped cylinder arrangement, they are placed in line, resulting in a more compact engine that allows for simple intake and exhaust routing. It also reduces the number of components in the engine. Instead of two cylinder heads, only one is needed, instead of four, only two camshafts are installed and the camshaft drive system can be designed more simply. This also saves on production costs, which leads to a lower price for the customer or an increase in profit for the manufacturer, depending on how it is handled.

Whether the engine could be equipped with a turbo in the future is an open question. However, this would make it possible to use the engine as a drive system for a large number of different models. The turbo could cover a very wide performance range.  Other manufacturers are also working on corresponding engines.