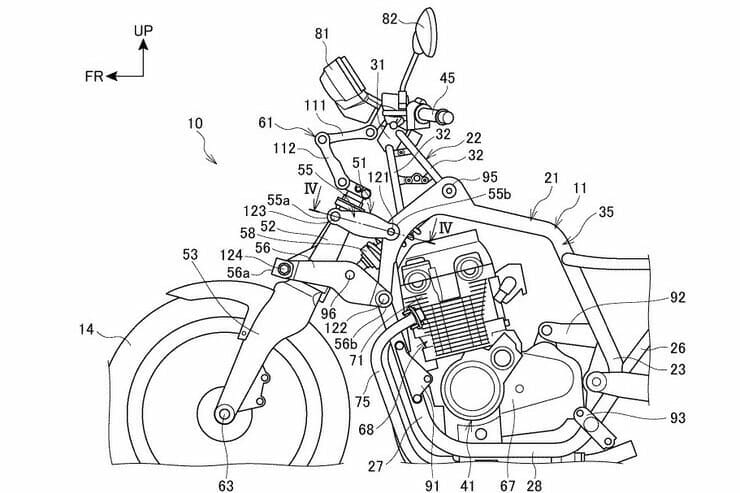 Patent – Does Honda want to deviate from the traditional fork?

3 min read
Honda developed a Hossack style front suspension for the new Goldwing. New patent applications show considerations to use them in various other Honda models.

Honda developed a Hossack style front suspension for the new Goldwing. New patent applications show considerations to use them in various other Honda models.

The Hossack fork is a further development of the trapezoidal fork from the 80s. The Duolever construction is also based on this. A central shock absorber sits between the wishbone and the frame.

In the construction of Honda, two wishbones are mounted in a slightly different way, otherwise the system is very similar to a Duolever.

When braking, a telescopic fork is bent by the forces that occur. Hossack constructions are designed to transmit these forces to the frame of the motorcycle. The aim is to achieve a wheelbase that is as constant as possible and to reduce the load on the front. Finally, weight could be saved since the structure would no longer be subjected to such heavy loads.

The system is already in use in the new Honda Goldwing

However, the patent applications show the front suspension on a CB1100 and a C125 Super Cub, two completely different vehicles with a wide variety of steering and suspension requirements.

The steering system was also changed. The handlebars were mounted much further back. A scissor-like hinge link is required to transmit the steering forces, similar to the Duolever.

With the Super Cub, adjustments are easier because the engine is out of the way.

Some time ago, they even worked on an adaptation for the MotoGP motorcycle RC213V. The system has not yet been used there. It is not yet possible to say whether it will finally find its way into other motorcycles or whether it will be reserved for the Goldwing.