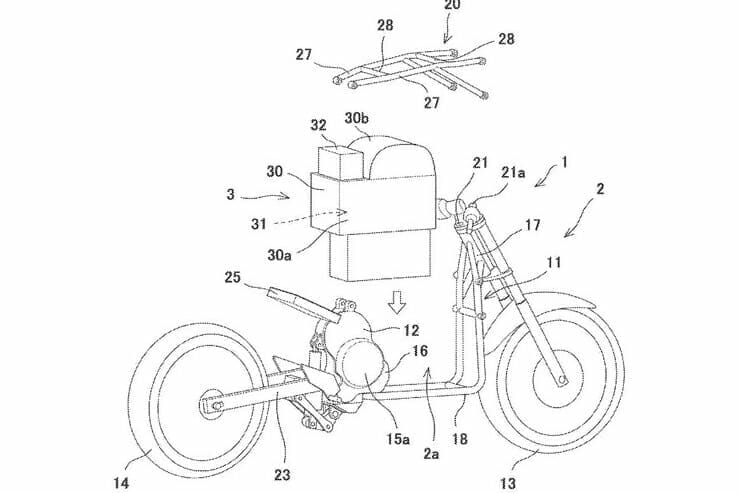 Kawasaki Endeavor could be close to series production

Even if Kawasaki has not yet announced Endeavor as a new model, a market launch is becoming more and more likely. The pictures of the patent application show the frame, motor, battery, transmission and chassis parts of the electric motorcycle.

A picture shows the planned delivery to dealers. The battery unit is supplied separately and installed in the chassis in the workshop before the motorcycle is delivered to the customer. The battery is equipped with a control unit that has accelerometers and temperature sensors. This could be used for assistance systems before use to monitor the battery unit during transport and report any damage, if necessary.

From this patent could conclude that the motorcycle base frame is to be built in existing factories, whereby the battery unit could be manufactured in factories specially designed for it. This would result in more flexibility and would not have to make major adjustments in existing plants.

One could also suspect a replaceable battery behind the system, which can be replaced at “petrol stations” to avoid long charging times. However, the battery unit is too large for this. In addition, a corresponding “filling station network” would be needed.

The use of a separately developed battery unit that will be assembled later could also allow the unit to be used in a wide variety of models. Kawasaki would have the opportunity to develop different models around the same drive unit.

It should be kept in mind, however, that patents are no guarantee of a real market launch.