Most of you know the words or have at least heard of one or the other. The aim here is to do away with the myths and explain how it works. Each one of you can do it with a little practice, because it is also not rocket science. 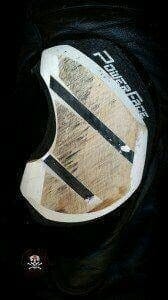 Many be envied at the meeting carriers of used knee sliders. Some actually edit with a file or something, you can buy on eBay used or uses the service to let sand the Slider (even that there is) … Just to belong to the “illustrious circle” (you have to this?) , Everything really is not necessary, because you make in the future itself precisely as it should be😉

[sam id=2 codes=true]-the lateral weight transfer when you already depends almost next to the motorcycle. Without “Hanging off” no knee down! (that’s for the first and most important rule, because Hanging off anyway for the driving skills much more important than the actual knee down) 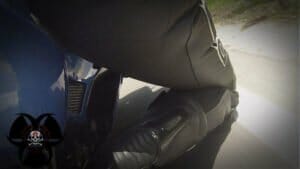 KneeDown, how does that work?

Without “Hanging off” no Kneedown

Therefore, first the explanation how to use a real HangingOff:

A basic rule when motorcycling is stay loose and never sit cramped on the bike. The ball of the foot or even the toes sit on the footrests, not the middle of the foot. For a sporty driving style, this gives a better feel for the bike and the road. If the foot too far forward, this can also lead to problems in inclined position, but later more about this.

[sam id=”66″ codes=”true”]For a “hang off” it is not enough to stretch out the knee. You slips on the seat bench for the inside of the curve just to sit still with approximately one butt cheek. It is very important to make this not only in the curve but before it. So you is preparing for the curve. If you were to do it only at the beginning of the curve could possibly bring about a lot of unrest in the chassis! In alternating curves there naturally is no alternative.

It is important to practice this and to test it the best on a line or gentle curves at slow speed. In the beginning it is very unusual and feels weird. There is also the risk with the upper body to try to balance the lateral weight by pushing the upper body against the curve.

This means that if the ass depends to the right prevents you look at possibly the torso to the left. This is an absolutely fatal error, and may be the reason why you never get the knee to the ground. You have not be afraid, the bike is so stable that represents the weight transfer no problem with driving – you have to just used to it first.

As it now goes for around the curve? The line and the speed is obviously very important. To used to it the speed should only gradually increase to a sense of the curve and get “Hanging off”. Just not rush anything and play it safe. Two not to be underestimated for a KneeDown points are the views management and the upper body position. You have look very far into the curve and not only short pre-front. This should be a basic rule when riding a motorcycle but really, you already mastered. Extremely important is also the upper body position. As already described above may be the weight transfer to the upper body does not compensate, on the contrary, you have to reinforce them. 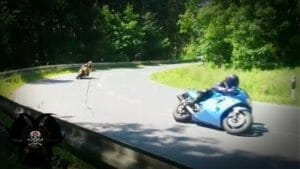 You often see the driver’s helmet, despite Hanging off directly behind the windscreen is. This is fundamentally wrong. The upper body belongs to the inside of the curve. You should bend forward and to the side. As a tip: “Try to bite you in their own hands“, then you come automatically in the correct posture. The curve exterior forearm is with a little practice then on to the tank. The inside of the curve foot sits with his toes on the foot rests and tilts slightly above the top of the footrest outward. The knee is stretched outward, the outside curve foot pushes the heel firmly on the footrest and the outside curve knee is on the tank (you have to, depending on the seating position, something slipping backwards). With the outside of the curve leg to grips into the bike, here is the load. On the inside of the curve foot that is slightly tilted outwards, is no load! 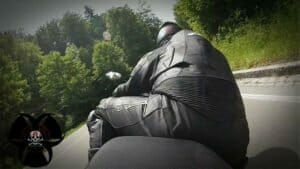 If you first sit with your foot on the road instead of the knee (toe slider on the boots are recommended) you tiptoe too far forward. Then continue to set foot back, not that you yourself even cancel out … I’ve already made and thus a Mini Highsider triggered the I still intercepted, but the ass has s me been lifted but it can also are at the position of the footrest itself. Remedy provides an adjustable footrest. – Since I Kneesliders instructions just about work I have to say here that I have it now already done overturn me with my foot and have thus completed the Highsider … Ouch … You should now and then be Hanging therefore check off, error can creep in every now and then, just after the winter when you are not long gone … 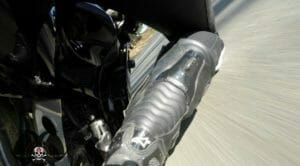 Have you heeded this all you’re with a good “Hanging off” on the go and the knee down is a mere formality. That comes with a little practice by itself. It is best to exercise at a known distance with a good clear and not too fast curve. (A large car park is also a good way)

[sam id=2 codes=true]They should preferably have a uniform radius, and not be too short, so that one has the possibility to open the gas a little to increase the oblique position safely. It is safer course on the racetrack or a traffic training area. This is of course entirely up to you, but not everyone wants to pay the money for it … you have to care very well and often should not drive the curve course. 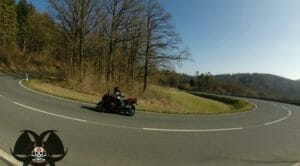 Through something like this too many applause lines or curves have been locked … That none of us wants. In any case, one should slowly ran the thing grope and increase very slowly! Merely force anything because it does not work anyway. As the saying goes, “the road has not come to the knee, not the knee to the street“.

So go slow and not risk a fall !!! As above already written always remain relaxed and not cramped the handlebar steady. Especially on the handlebars you should always be easy, it is not to hold on there! 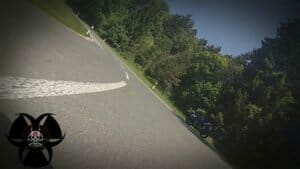 This guide can not be transferred to any machine one on one, but basically it’s almost with every machine possible. It is not even on your size, too narrow a leather suit, leading to short thigh or else to! The important thing is the right technique and the easy takes time and practice!

However, a proper racing combi offers more freedom of movement and by the better splaying of the knee it comes earlier on the floor. With normal and narrow wagons it is also, only you have to a little longer practicing until you have enough inclined position (the knee should not go so far to go out). This can not all be said lump sum, just depends on the body and the suit. 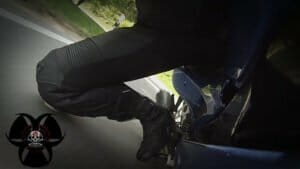 It is a driving technique as “Press” or “Insert”. Advantage is the weight transfer to curve inside. This reduces the inclined position is needed since one influences the centrifugal positive (simple words) at the same speed. Conversely, a higher cornering speed is entirely possible. A lower bank angle is automatically on poor surfaces (wet, grease, dirt) safer on the road.

You get a better feel for the front wheel and a slight slip may possibly even be intercepted with the knee. They have a better sense by the inclined position sensor knee, and also makes it easy infinite fun with your knee on the road to grind. 🙂 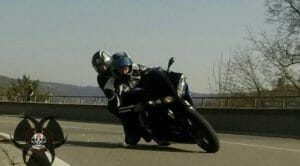 Downside is that you (on public roads) may not respond as well in dangerous situations. You hangs next the bike you can not as well or as quickly execute an evasive maneuver on the handlebars. This and the high speeds at which most knee down is the reason why it is frowned upon by many. Many people believe something like that does not belong in the road, but only on the race track. They will also have an incriminating finger ready to pull–to–ago Something about me because I’ll explain another “Hanging off” or even recommend. But I think everyone has to decide for themselves which, because only the “haning off” it is not whether someone is “safe” or “hazardous” is on the way. Because many other factors are critical!

Personally, I think that it is always safest when you have mastered your motorcycle and, it is also necessary to have all the driving techniques on it – that is also the Kneedown. No one should ever drive on its border, but one wants to have to move its border and that is only if you go to its limits from time to time to get better. Just so you can be for the future better and safer on the road! Only those who can drive well has no need ever to go on its border. 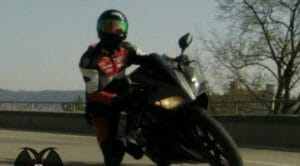 A novice driver is constantly on its border and each of the now raises the index finger moves now only as good because he has practiced and has slowly increased. So other admits also this right.

And now have fun while practicing and grinding 😛

What do you think of the description? Did it help you? Did I forget something? Writes down in the comments 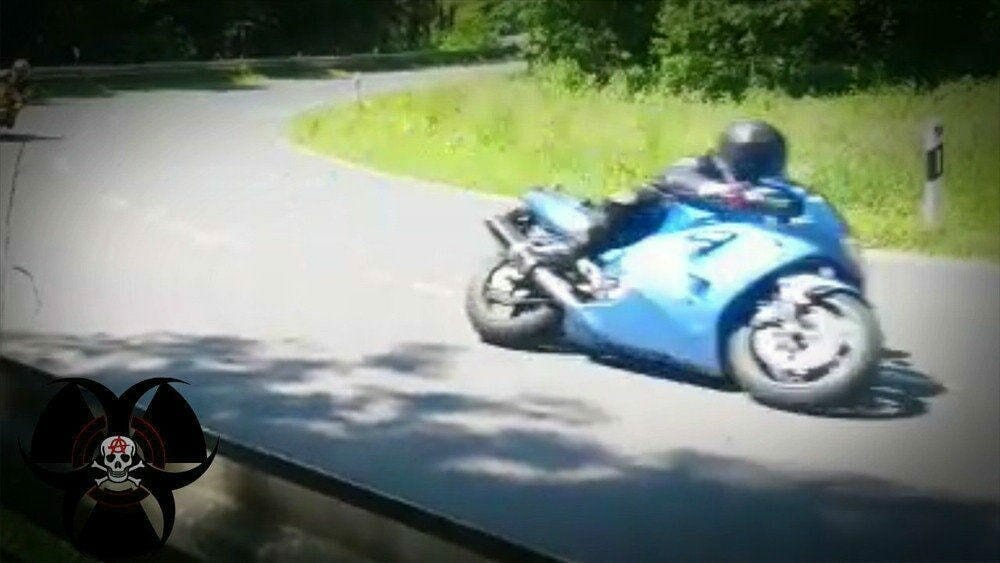 In Romania, you may be fined if you don’t have a fire extinguisher with you