from the racetrack, from-the-street, Motorsport

Hockenheim – Tourists ride on the track

On 10.25.2014 took place a tourist ride for motorcycles and cars on the Hockenheimring in Baden-Württemberg. Here is the report incl. Photos.

Orient what is going on here 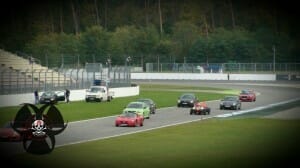 It started the whole thing by 10 clock, but I’ve done it until later. When I arrived the Kammera was caught by something material to get for the contribution. From 12 to 13 clock lunch break was on the ring, because I had enough time to make the machine to load from the trailer. 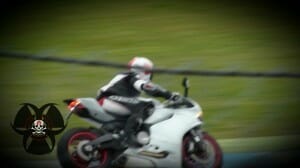 [sam id=2 codes=true]It just drove cars on the track and it was not just a few (how many you can watch in the video). From sports cars to family car everything was represented. This makes also the background of the tourist trip, everyone is allowed on the Track.

According the Internet Cars and bikes should ride alternately, so I was wondering when the next car drove onto the track. The problem was simply that too many were there. 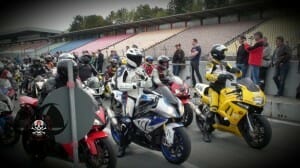 This reduces the number of turns for motorcycles but was greatly reduced. In these turns always all bikers were on the course. This was not divided by a certain number.

What is the process and the rules of tourists ride? 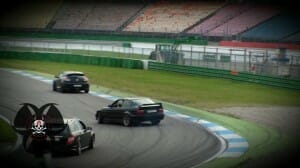 One buys in a provisionally erected container for 15 euros a ticket for a turn a 15 min. Explains is a nothing and also an information board can not be found. On the back of the card can be found only a short overview:

– In the event include the road rules! Thus, the Hockenheimring is secure and it is one of self-insurance of the vehicle. Therefore, the vehicle must be registered and roadworthy. Tested that was not (as far as I’ve seen it). With a racer but you would not come to the ring, because lack of mirrors and headlights would have been too obvious …

– May overtake only left (was not interested), and the db limit applies here, too, it was actually the rules. Otherwise, there were still so things like that can be filmed and agree to the publication … 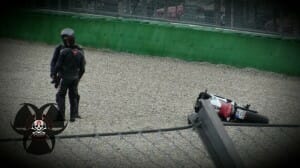 How it’s going on the track, what they mean, the flags, what to do in case of an accident, as I remember when the turn is over, how do I get ever again from the track (where is the pit lane entry) was not explained. Here we had to rely on it ask their way among the participants, just to orient the drive to the other or to contact the staff, who were easily recognized by their Hockenheim sweaters.

It applies the Highway Code … What does that mean? May only at 100 km / h can be driven? Highway it’s not … How does it work in an accident? I think with the insurance it is because it was difficult when they hear on the track …

On the race track, with lots and yet alone 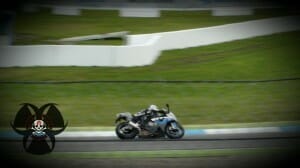 I was already in the Getting Started and an instructor training, so I already knew what about the track and how it could come off. In various forums is also a lot to read, and many even recommend to take on a tourist trip, because it is too dangerous. I was really excited and actually really excited. 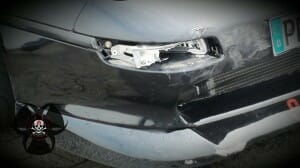 [sam id=2 codes=true]My Highsider still put me in the bone (still had sometimes pain) and a huge respect for the fact that here the absolute beginner to very good racing driver (I say now not aware professional, as do the determined not to), and more is , The machines themselves were extremely mixed. From Supersportl motorcycle on enduro with full luggage facilities up to a scooter everything was represented here. 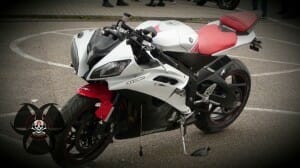 I was back with my little ones with the incredible 65 Ps in the lineup. Then it started. All drove off at the same time and accordingly it jammed also equal before the first corner. This was also exacerbated by the first crash. So first yellow and all extremely off the gas. A driver was upside down in the first corner. He must have lost his grip and but they set up again. Only he had to wait until the rush was over before he could turn and continue driving. 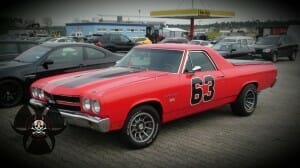 Before the hairpin after the Parabolika it has jammed again, but then it was getting better. A clean line but you could not drive mostly because it was blocked by other drivers or you have already seen that came a Faster from behind. But we did not know what the moves for a line, and so I’ve left happy times square. Sometimes I’d me able to save this because the drivers knew the line and had left me the place. Sometimes it was also better, because I would otherwise have been cleared in any case. Here is the main problem of the tourist trip, anyone can do it and therefore you never what the other can and does … 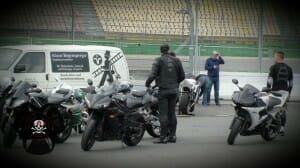 I was the first time alone in the ring and had to find my braking, turning and vertices alone accordingly. So really I do not always succeeded and by and large I am not satisfied with the turn. I was now also clear why there are no rearview mirrors on the Run. “If you do not have the time to gaze into the mirror, you’re too slow!” Here you have it though. You had to have his eyes everywhere. On the Run one focuses only forward. One drives his line and behind must behold where and how he comes over! This applies not everything and that makes it quite complicated. Especially if you are traveling with incredible 65 Ps and many loose have 100 more meaty … 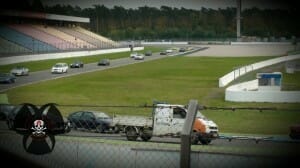 Departures were also abundantly, continually saw a yellow flag. For this, there was also no rules of conduct. One saw people on their bikes mess around, just in the curve. Nobody taught himself or his machine in safety. There were no marshals to help because it was not so many as in a race training. Well, it was just not on the track, it is the Highway Code and more secure as on a normal road it was so.

It even stopped drivers in the curve to help. In a race training so what it would not give. On the line is never, absolutely never stopped. No matter what happens! 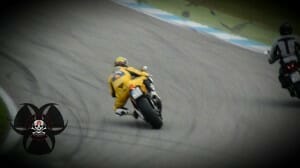 The turn was then flagged with the black / white flag and you had in the pit lane. Many were also extremely equal of gas. I know this so well not. Normal the round will normally run to the end and then in the pit lane with hands (raise your left hand – sign of slow driving) bent. Not everyone is successful, as many probably did not even know where the black / white flag is swung or he simply overlooked. One or the other has probably not found the pit entry, at least turned Individual morning still an extra round.

For me that’s the only turn was because I had to film and photograph. It was supposed to go on the day only to 16.00 clock but it was still covered. This makes it even came to turn two for motorcycles. Turn right at the last bit was even going on. As you would probably have to really concentrate on the line.

Tourists ride – dangerous or not? – To recommend or not?

I can not give a general answer. This must almost everyone decide for themselves. 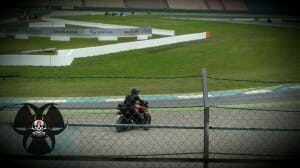 For tourists ride speaks not to beat price. How low will not get you more on the race track. To breathe raceair and to collect a first experience, it is not bad. One is definitely more secure than on the highway. Really like on a race training but it is not. 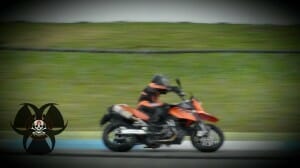 In contrast, that one speaks but can not go the way you want like. You have to take too much consideration for others. One can not judge what others can and do. Therefore, it is advisable to back off in case of doubt. It is dangerous anyway, and it is not as well protected as in a race training. 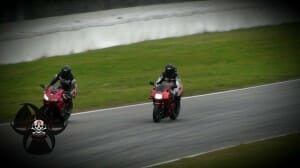 The rules are simple too opaque or simply not known. It’s just a gray area but must remain so. Established and enforced rules knitted then no one wants to go there anymore. Then you can also give gas on the highway. If so driven and on the track and it also hedged so, then could only a fraction of the people on the track and the price would rise sharply. The ability for each something to sniff racing air would go so thereby lost. That is what makes it so difficult to judge whether there is now great or bad …

But I’ll definitely go there again and then also hope to create more driving time as at this time. 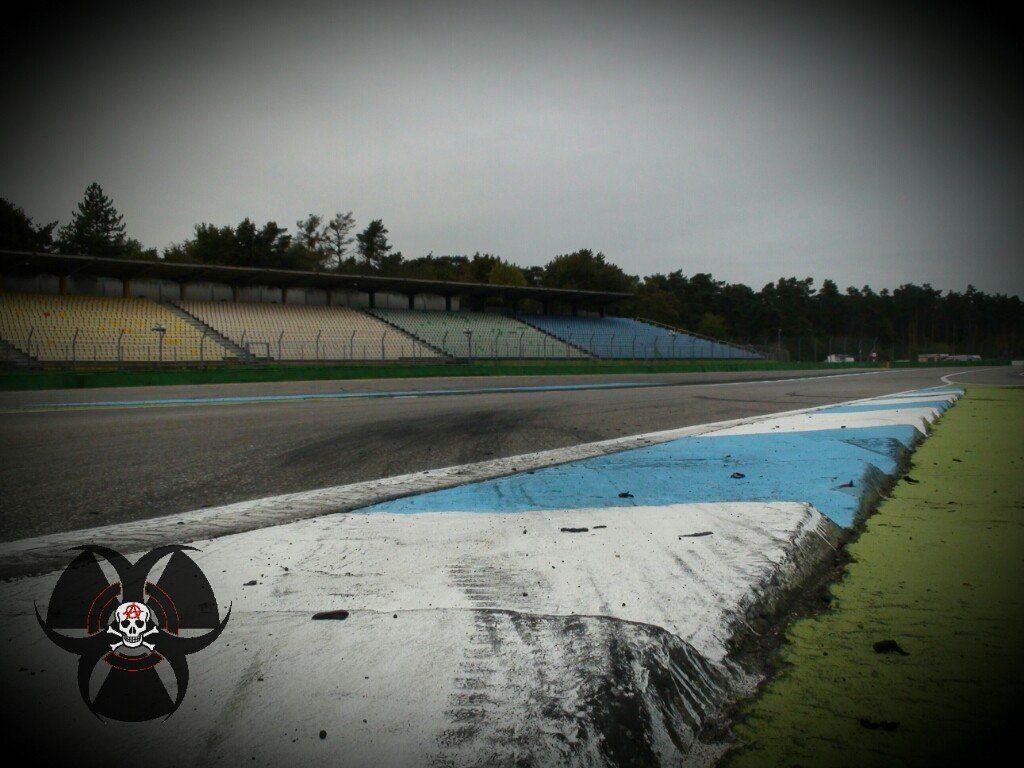