Suzuki is celebrating its seventh rider title in the premier class of the motorcycle world championship, the MotoGP, with a special series of the current GSX-R1000R in special paint schemes.

Seven different designs are available to choose online. The graphics have been modeled on the motorcycles with which the seven racers clinched their titles. In addition, the limited-edition models are equipped with an Akrapovic muffler and a pillion cover.

Anyone who wants to get hold of one of the copies can do so at store.suzuki.it/moto/suzukilegends/. The price is 22,500 euros. The special edition is currently announced for Italy, whether it will be sold in other countries is currently unknown.

The GSX-R1000R Legend Edition, which is a tribute to the RG500 on which Barry Sheene won Suzuki’s first 500cc World Championship in 1976, wears the colors of the famous Heron-Texaco team and the British rider’s distinctive number 7. The dominant colors are white and red, separated by a two-tone black and yellow trim, and a large S on the tank. 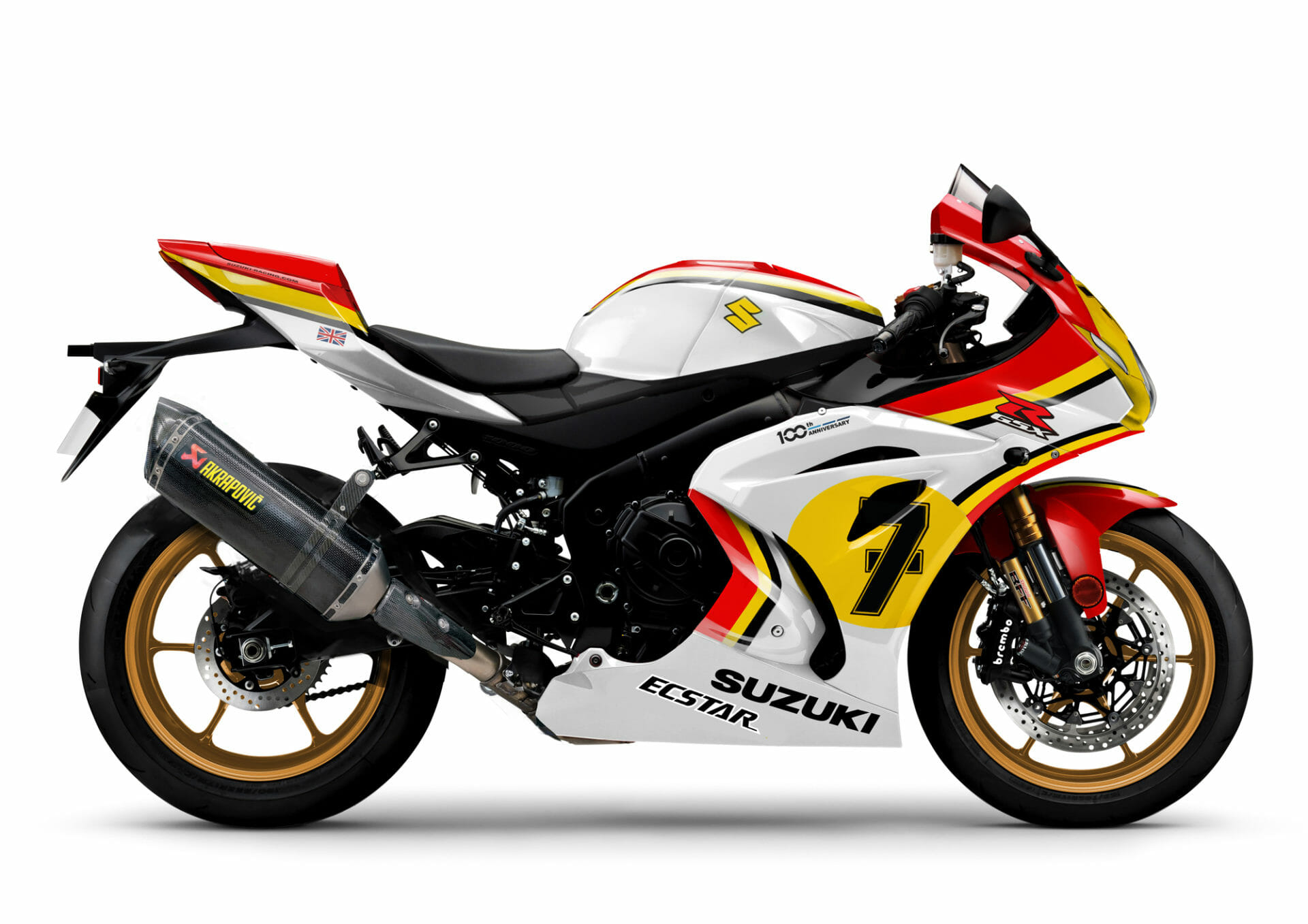 In 1977 Barry Sheene was able to repeat his success from the previous year on an upgraded Suzuki RG500. The GSX-R1000R Legend Edition, inspired by this bike, returns to the Heron-Texaco team colors, but has a large black Suzuki badge, while yellow gets more space on the bodywork. The 7 is present again, as the eccentric Sheene was the first prominent rider in the circus to stick to a specific number. 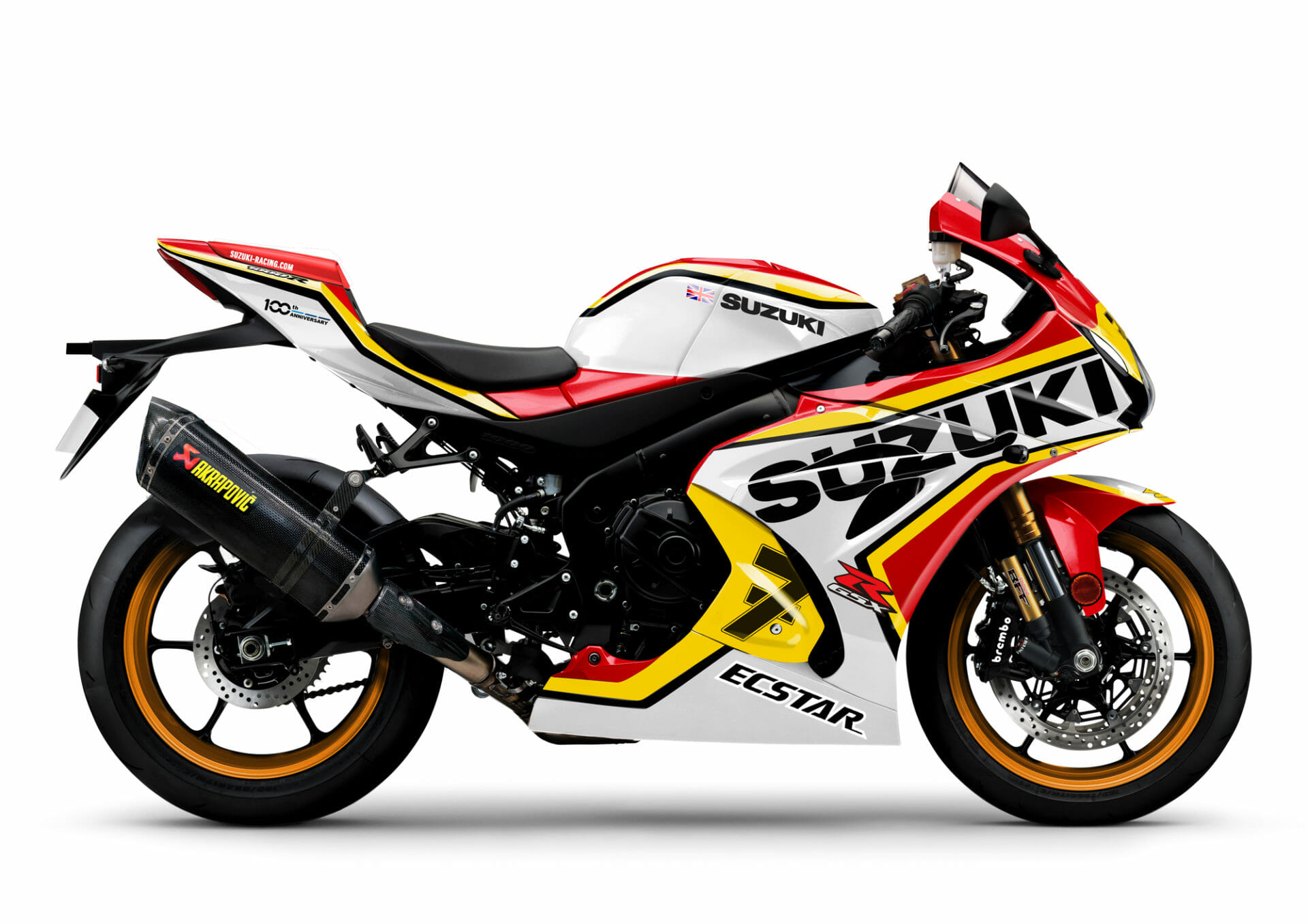 The third GSX-R1000R Legend Edition celebrates Marco Lucchinelli’s 1981 World Championship victory in the 500cc class for Team Gallina. In this case, the upper and lower parts of the bike are in dark blue, while white dominates the middle part. Other characteristic elements are some red accents, the yellow plate with the number 5 and the star that was Lucky’s lucky charm. 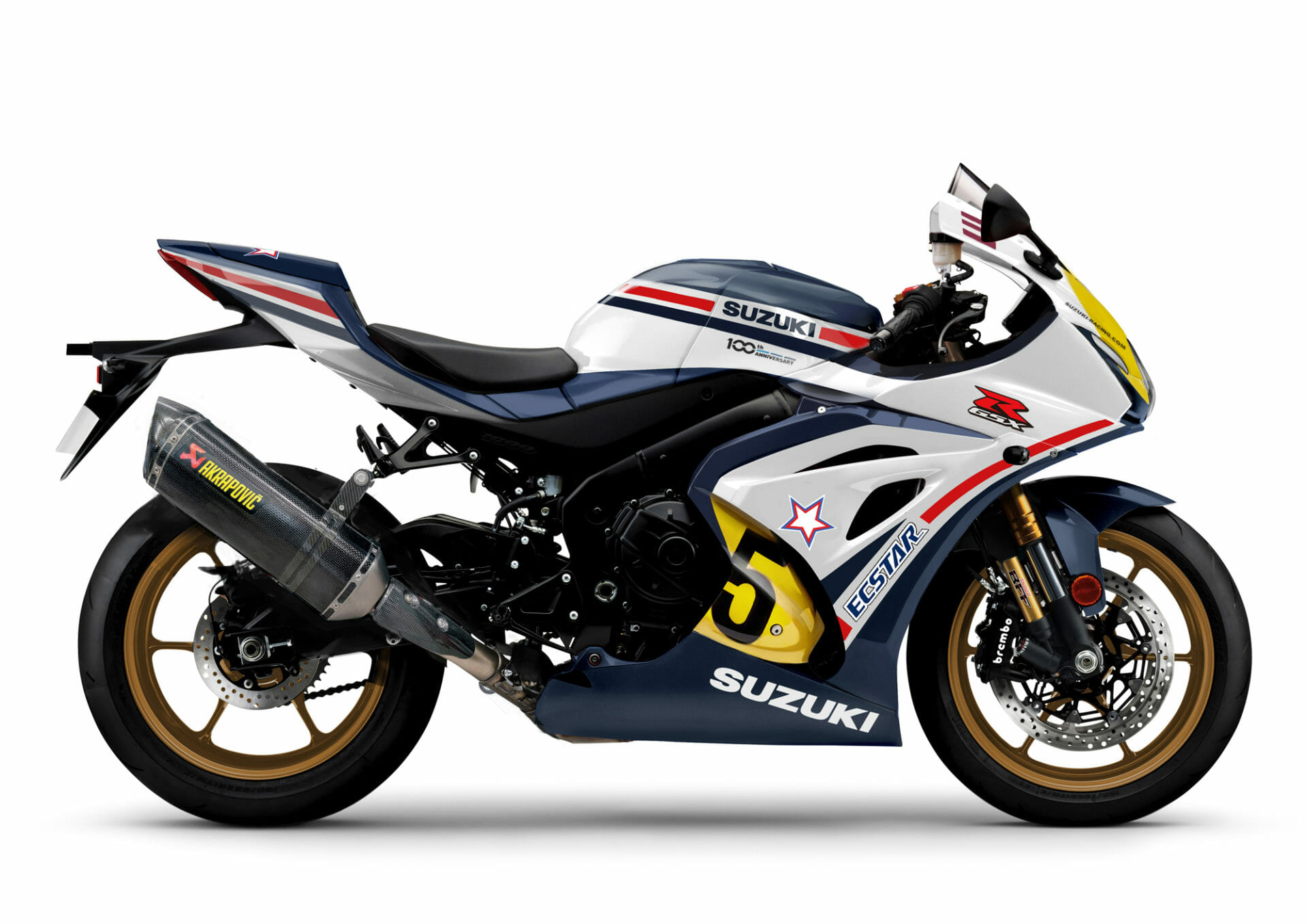 In 1982, Team Gallina was able to lead the RG500 to victory in the World Championship once again, this time with Franco Uncini and in a different color scheme. The GSX-R1000R Legend Edition, which recreates the look of that bike, is dressed in light blue, with the fairing, tank and tail enlivened by a multicolored band ranging from white to dark blue to light blue. This time the number 13 stands out on the yellow panels. 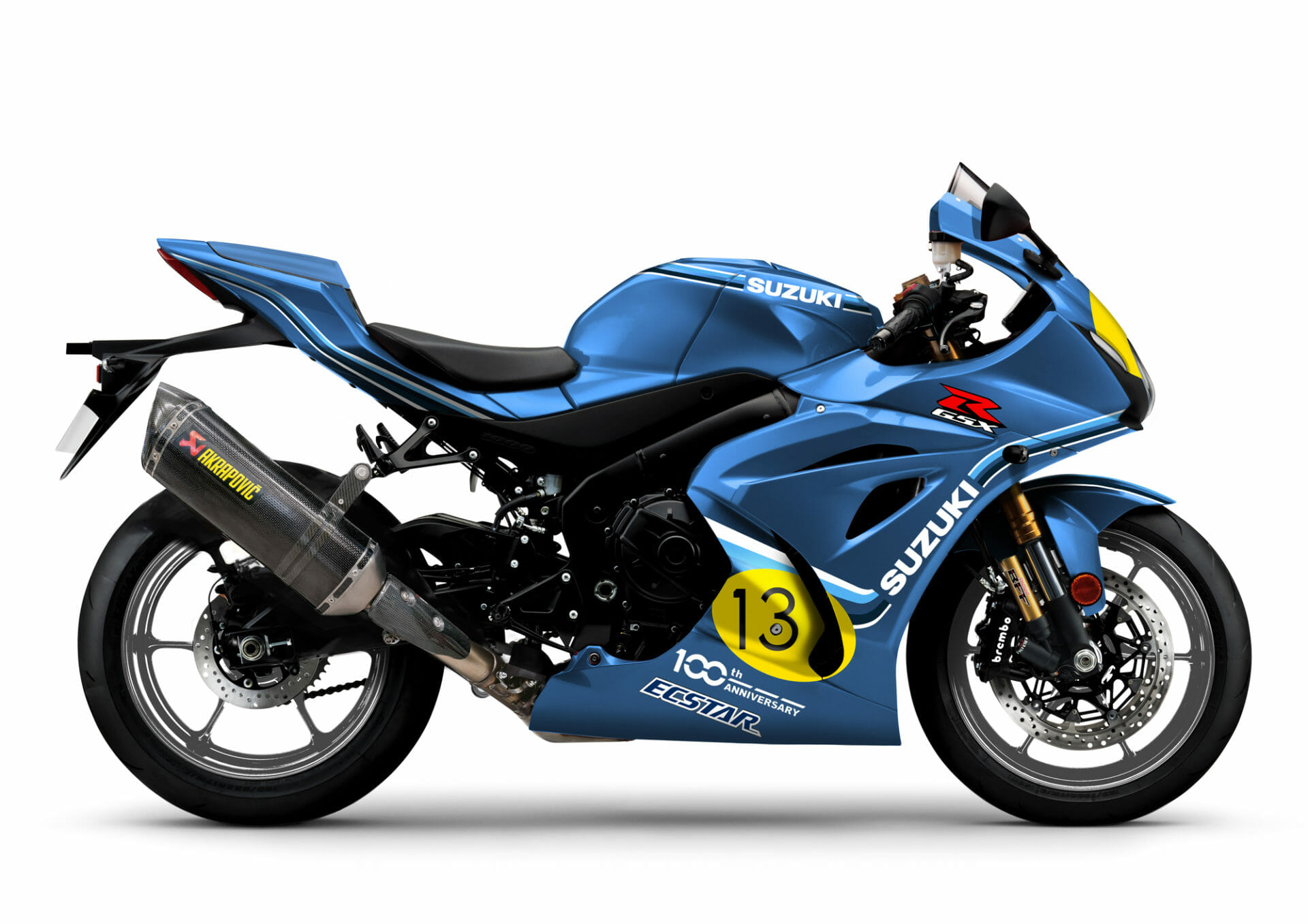 Dedicated to Kevin Schwantz, the GSX-R1000R Legend Edition features the same look as the RGV-Γ 500 on which the legendary Texas racer won the 1993 world title. The color scheme is the typical one of the sponsor at the time, Lucky Strike, with white and red as the main protagonists and military green and black as the outline. Since it is not possible to use the original tobacco brand, the scene is all about the famous number 34. 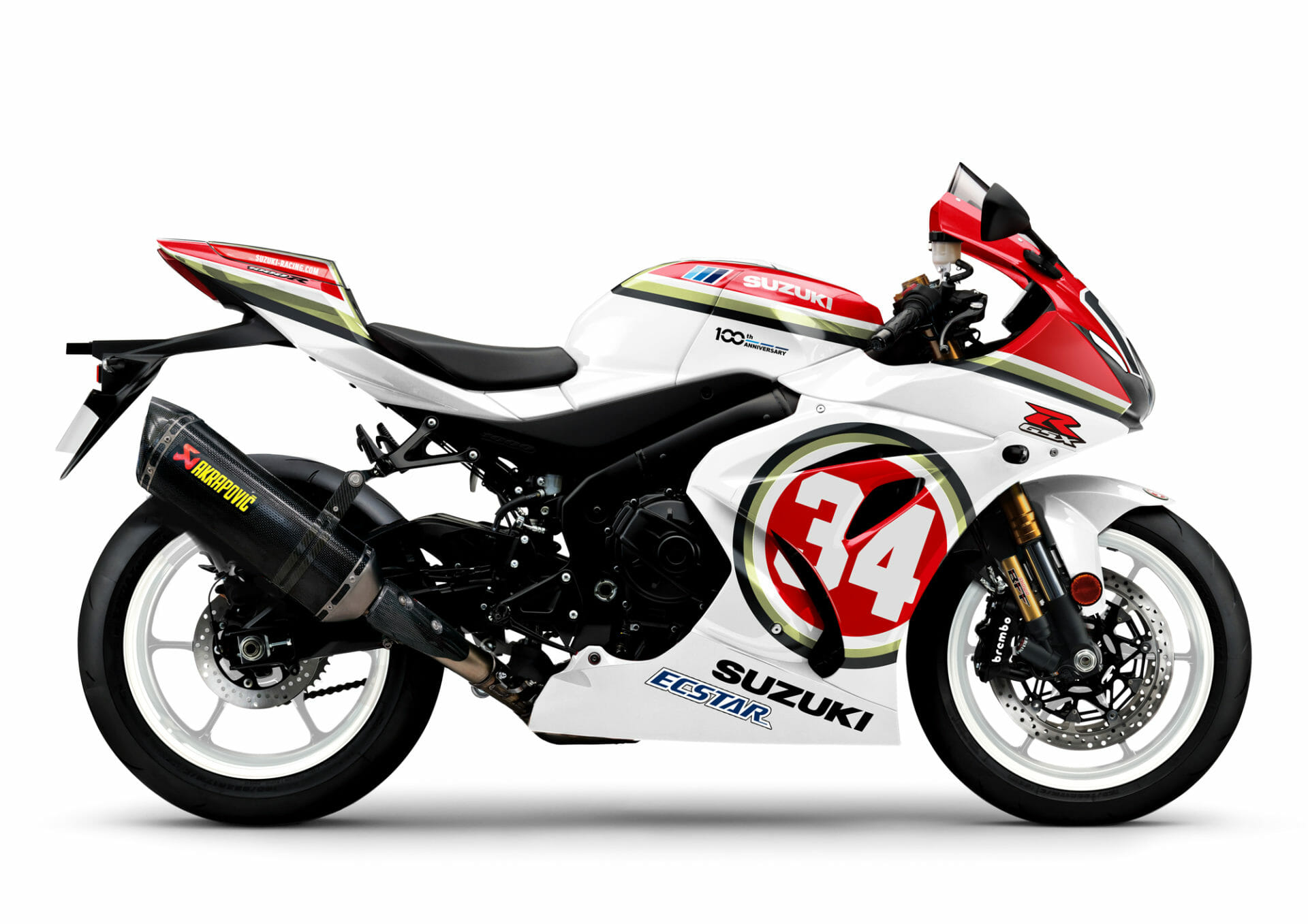 The bright blue and yellow checkered pattern makes the connection between the sixth GSX-R1000R Legend Edition and the RGV-Γ 500 ridden by Kenny Roberts Jr. in 2000, when the American rode as an underdog and still beat the competition. A wide yellow stripe adds oomph to the fairing’s belly pan, while above the headlight and on the sides of the rear is the number 2 that Roberts is wearing this season. 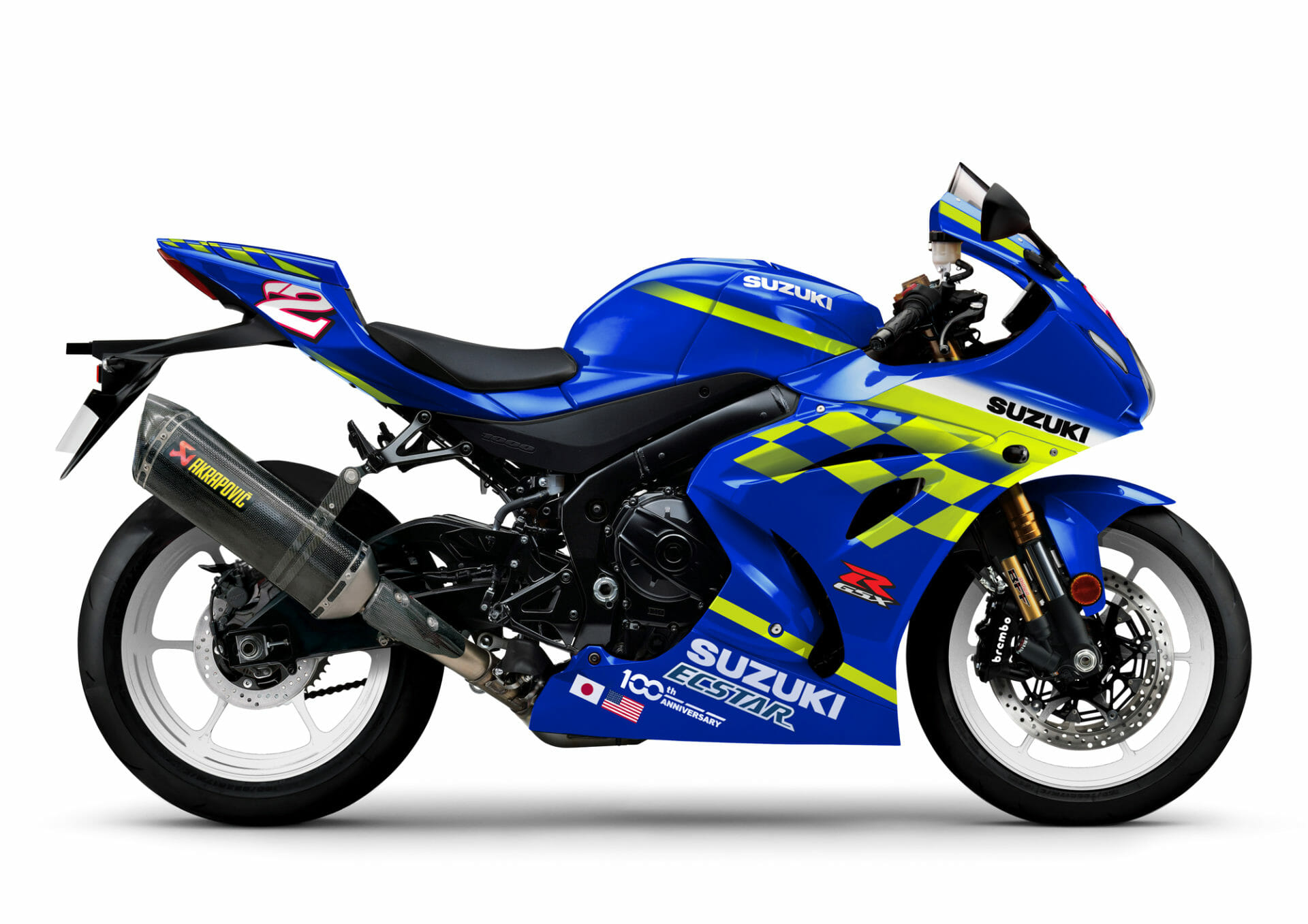 To celebrate Joan Mir’s recent World Championship victory, Suzuki Italy has decided to create the seventh GSX-R1000R Legend Edition with the Ecstar Team GSX-RR anniversary livery and the number 1. In this case, the blue and slate silver, which commemorates the 60th anniversary of the MotoGP debut and the 100th anniversary of the founding of Suzuki, frame some golden details similar to those chosen by the Mallorcan rider for the celebrations. This is a different livery than that of the anniversary version launched in 2020. 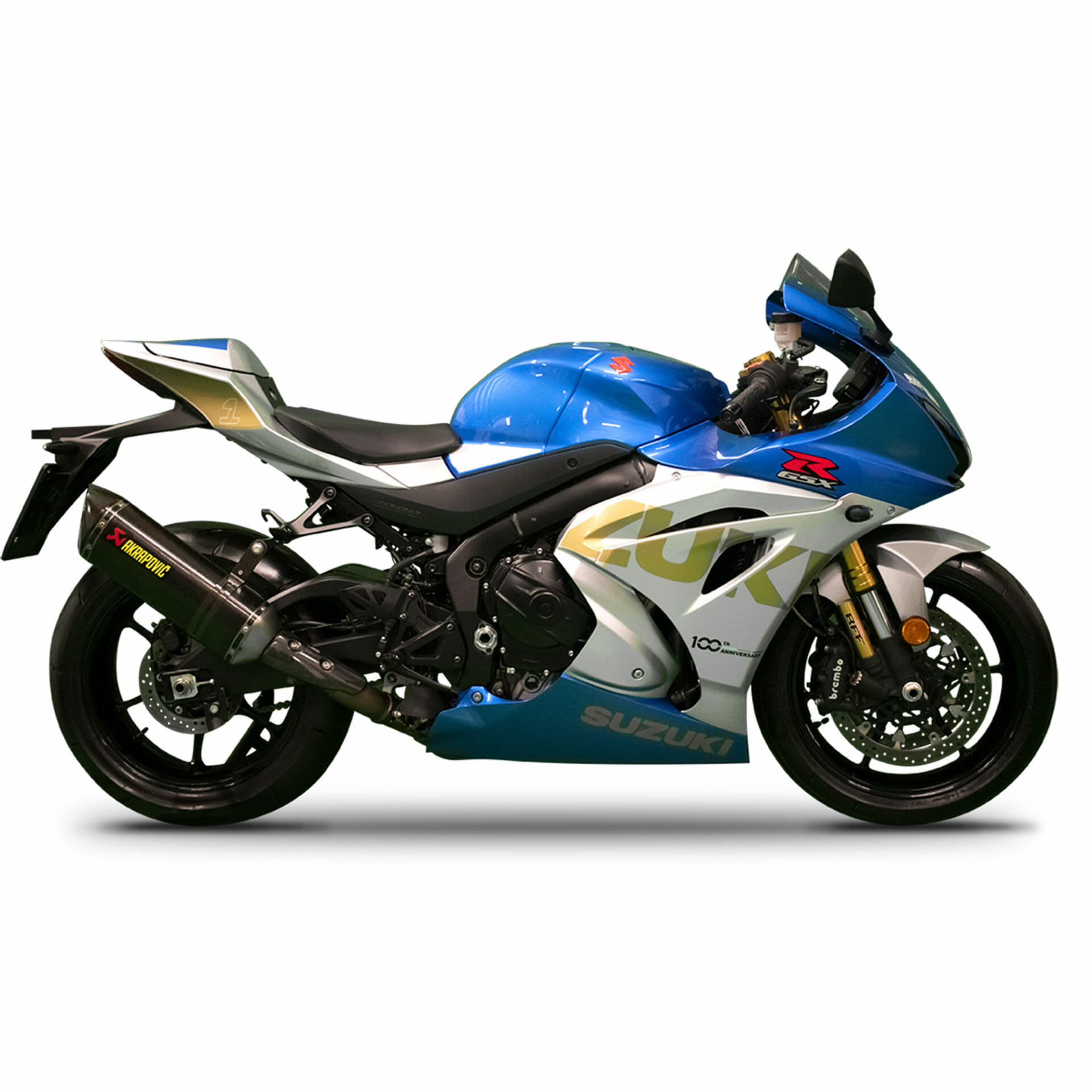 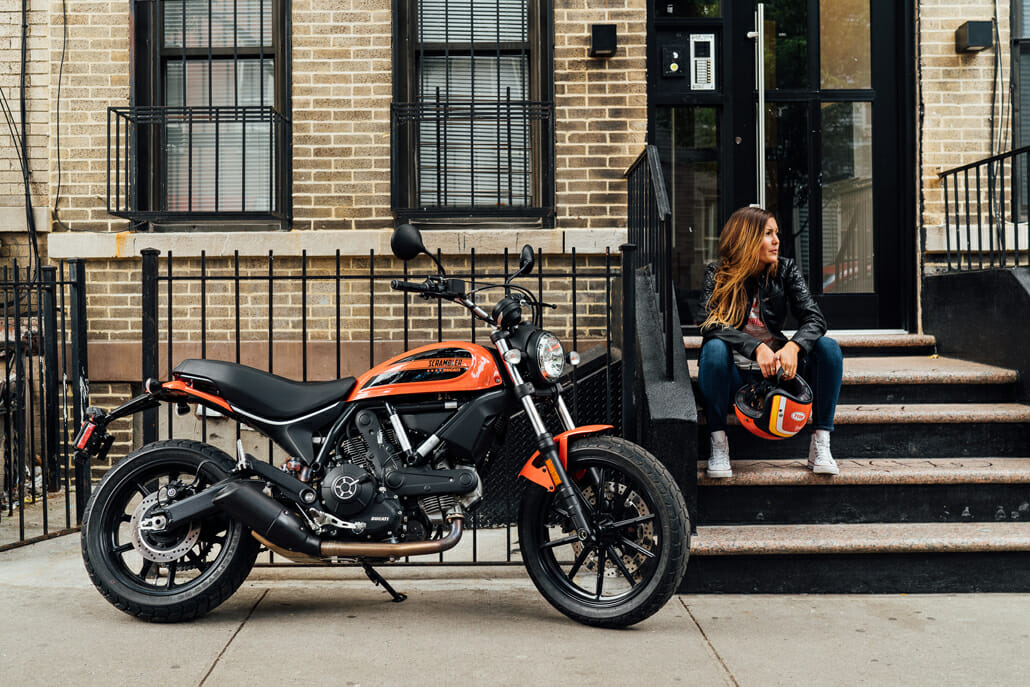