Ducati has unveiled the all-new Multistrada V4, a sporty but comfortable motorbike designed to master any road condition, whether asphalt or gravel.

For the Multistrada V4, the engine has been completely developed from scratch. It has 1,158 cc and delivers 125 kW or 170 PS at 10,500 rpm. The maximum torque is 125 Nm and is reached at 8,750 rpm. Even with a full load, it is designed to offer maximum smoothness and progressive power delivery. For this purpose, a special torque curve has been developed for each gear to achieve a smooth power delivery in the lower speed range, a high torque in the middle and a sporty character in the upper speed range. The transmission was designed with the same approach. The first gear is said to be ideal for driving and manoeuvring at extremely low speeds, as well as for uphill, off-road or full load driving. The sixth gear, on the other hand, has been designed for long distances on the motorway.

The Sport and Touring riding modes offer the full performance, but they differ in characteristics and the impact on other assistance systems. The Urban and Enduro modes reduce the maximum power to 115 PS.

The Ducati Multistrada V4 is the first production motorbike to be equipped with radar technology. The system reconstructs the motorbike’s environment and is designed to make riding easier and actively support the rider. It enables two basic functions, adaptive cruise control and blind spot monitoring.

This makes it possible to activate cruise control, which automatically maintains the set speed while monitoring the distance to other road users and adjusting the speed if necessary. However, the driver himself always remains responsible and can intervene at any time.

Blind Spot Detection detects vehicles in the blind spot and uses LEDs in the mirror to alert the driver to a possible vehicle, for example when changing lanes.

The IMU controls the functions of cornering ABS, Ducati Wheelie Control, traction control and, on the Multistrada V4 S, cornering light. For easier starting, especially on gradients, a Vehicle Hold Control was installed.

The semi-active suspension of the V4 S is also controlled via the IMU, so that the hydraulics of the fork and shock absorber can adapt optimally to the driving conditions within fractions of a second. For the first time, an auto-leveling function has also been integrated here, which recognises when the motorbike has been loaded and additionally adjusts the settings to the corresponding weight. A tyre pressure control system is optional.

The dashboard has been completely revised and is now multilingual. The V4 gets a 5 inch version and the V4S a 6.5 inch version. The V4 S also has a joystick in the left-hand control panel to ensure easy navigation through the new menu. The Ducati Connect system allows mobile phone apps to be mirrored on the display via Bluetooth or Wi-Fi and operated using the joystick. This allows you to choose your music or even display the navigation on the Multistrada display.

Other data of the Multistrada V4

The Multistrada V4 is equipped with an aluminium monocoque frame, a 19-inch front wheel, double-sided swing arm and spoke wheels. The wheelbase is 1,567 mm, the suspension travel is 170 mm at the front and 180 mm at the rear. The ground clearance is 220 mm and the dry weight is 215 kg. More than 230 kg can be loaded.

Three versions of the Multistrada V4

The Multistrada V4 is also available in the S and S Sport versions, which can be fitted with optional spoked wheels. In general, Ducati has put together a wide range of accessories to tailor the Multistrada to its own needs.

Each version of the Multistrada V4 can be ordered in different equipment versions. There are also various accessory packages, which gives an extremely wide choice.

Overview of the models: 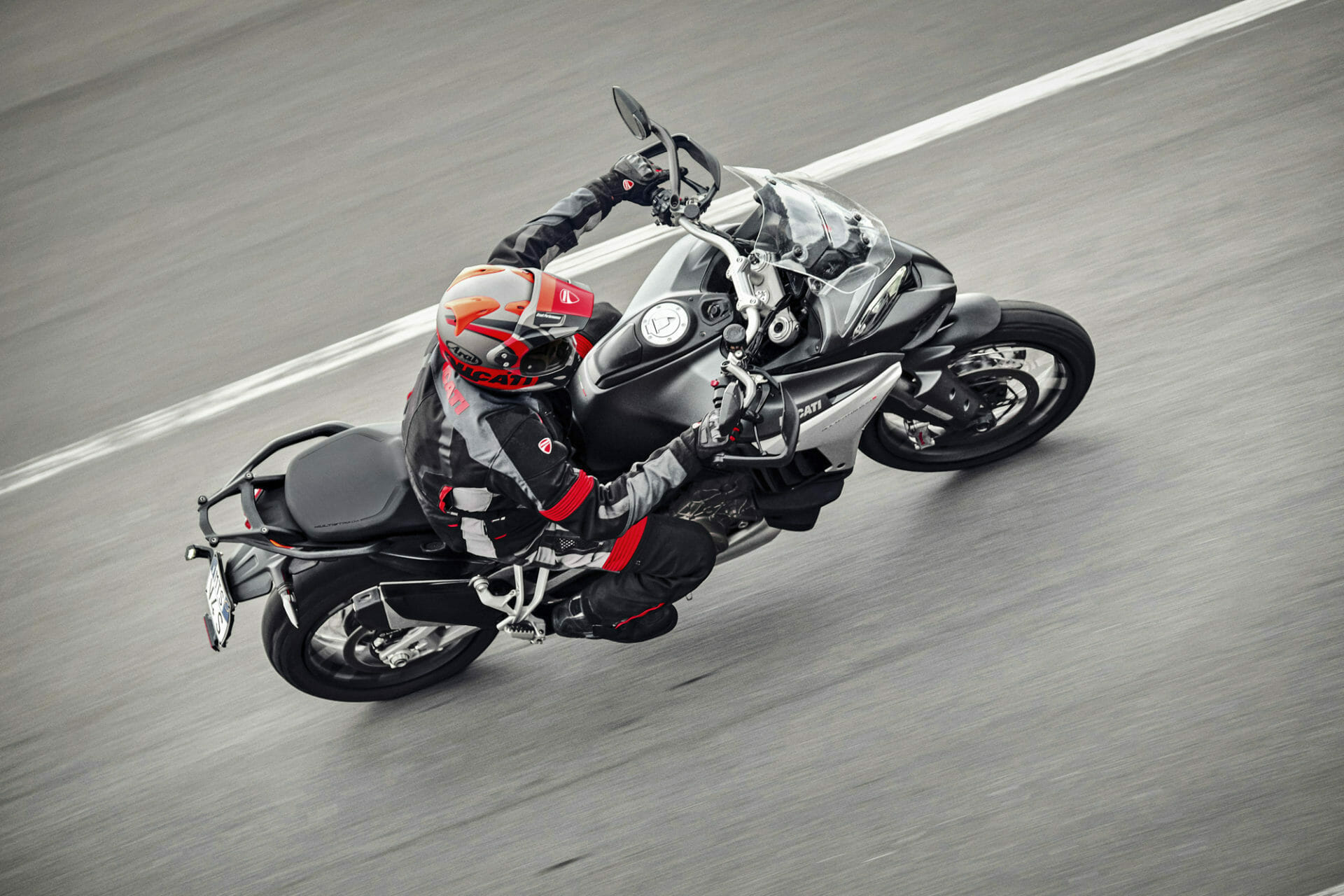