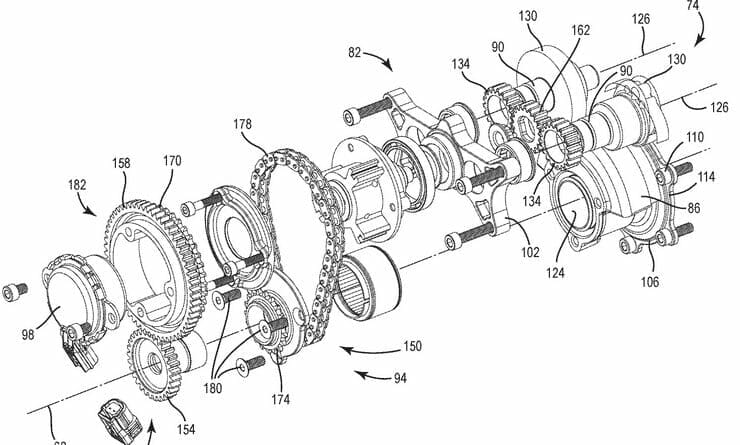 Harley-Davidson could use variable valve timing in future engines if one believe recent patent drawings.

The patent that emerged is actually about a modular engine balacer that is mounted on both sides of the crankshaft and is designed to counteract the forces in order to minimize engine vibrations. In the associated documents, one speaks of a variable valve control.

The motorcycle shown is probably only a rough example and not a model in which the engine should really be used. Therefore, the sketch is rather rough. The sketches of the engine, which differs from the engines currently used, are more detailed.

You can see a V-Twin with overhead valves and push rods on the opposite sides of each cylinder. The variable valve timing is connected to the cam gear and adjusts the timing to the cam, which affects the intake and exhaust valves. This should improve performance and emission values.

In the documents for this, you will find the name Johann Voges, whose designs for similar elements have already been put into practice. It can therefore be assumed that Harley will also implement the patent.

According to rumors, the new engine will replace the previous Sportster engine.