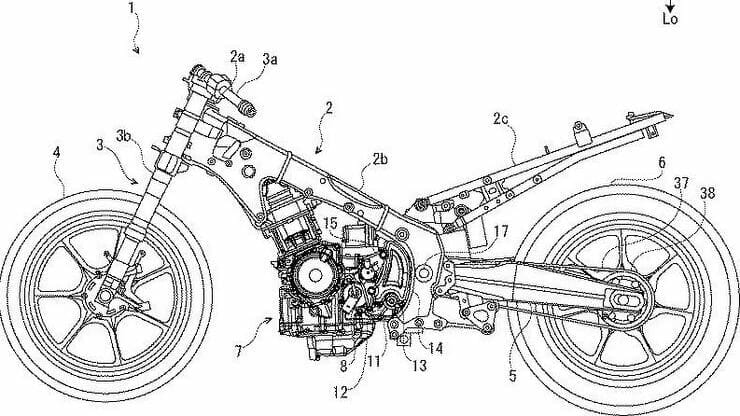 Patent for upcoming Hayabusa crop out

There were rumors about a new Suzuki Hayabusa before the last model was taken out of sale (only in Europe) because of Euro4. However, new patent applications indicate the development of a new Hayabusa.

Patent for upcoming Hayabusa crop out

Most recently, a patent application was released in January, revealing a much-revised Busa engine that is designed to be more emission-friendly. Yesterday another patent was released, originally filed in February 2018 at the Patent Office.

On display is a modern aluminum frame, which should be lighter compared to the chassis of the last Busa. The engine looks like a further development of the well-known 1,340 cc four-cylinder engine. Rumors speak of increasing the capacity.

The patent application of January saw an electronically controlled semi-automatic gearbox. (Picture in the comments / right) The sketch shows additional electronics and hydraulics for the gearbox. In the new patent drawing you can see a normal manual gearbox with hand-operated clutch and shift lever for the foot. (Picture in the comments / left, point 13 shows the shift lever spindle)

It can be assumed that two versions of the Hayabusa will be available for the market launch. Once with normal and once with semi-automatic gearbox.

When the new Suzuki Hayabusa will come on the market, is not really clear. It is believed that it will not be ready until 2021.