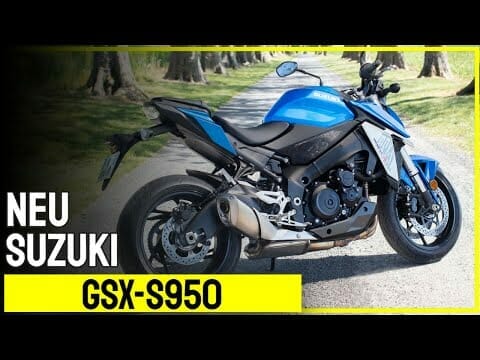 3 min read
Cinema Mode
Only recently Suzuki introduced the revised GSX-S1000, now follows up with the GSX-S950, an almost identical but A2-compliant version.

Only recently Suzuki introduced the revised GSX-S1000, now follows up with the GSX-S950, an almost identical but A2-compliant version.

From a purely visual point of view, the two sister models are almost identical. In order to be able to be A2-compliant throttled, the engine may generate a maximum of 70 kW or 95 PS in its original state, so the maximum engine output has been reduced from 152 PS in the GSX-S1000 to 95 PS for the GSX-S950. This also reduces the maximum torque somewhat. Instead of the 106 Nm at 9,250 rpm, the revised engine still manages 92 Nm at 6,500 rpm, but all in unthrottled condition. Converted to A2-compliant 48 PS, the engine still delivers a maximum torque of 76 Nm at 3,250 rpm.

However, throttling down to 48 PS also has a negative effect on consumption. With 6.1 liters, this increases by 0.8 liters per 100 km compared to the 152 PS version. CO² emissions also rise by 17 percent as a result.

In addition to the engine power, the GSX-S950 also loses the adjustability of the upside-down fork. This was still fully adjustable in the 1000 model, but the upside-down fork from Kayaba no longer offers corresponding options for this in the 950. The suspension travel is specified as 120 mm, the shock absorber offers a travel of 130 mm and is at least still adjustable in spring preload and compression damping.

Instead of Brembo brakes, the smaller sister model uses Tokico brakes. The diameters of the brake discs remain identical.

The equipment and assistance systems of the big sister have been adopted almost unchanged. The GSX-S950 is also equipped with the Suzuki Clutch Assist system, adjustable traction control and Easy Start system. However, various driving modes have to be dropped.

The lighting has also been adopted, with the exception of the turn signals, which use halogen instead of LED.

As far as the weight and the pure dimensions are concerned, the specified data are identical. Suzuki offers two color variants with Metallic Triton Blue and Metallic Matt Black. The price for Germany is stated at 10,400 Euros plus transfer costs.