As previously reported, Kawasaki are likely to present the ZX-10R and ZX-10RR for 2021 shortly. Now the first pictures of both models have appeared on the internet.

Pictures of the Kawasaki ZX-10R and ZX-10RR?

The pictures are said to be from the Australian area and from the type approval of the two models. In Australia manufacturers have to submit pictures of the motorbike in addition to the data.

If this is not a fake, the ZX-10R will get a new front, which reminds of the sister model Ninja H2. As the ZX-10RR is a homologation model for the WorldSuperbike racing motorcycle, it was actually expected that the new model would also have winglets. However, these are missing from the pictures.

To save weight, it can be assumed that the entire lighting system will use LED technology. Also the display in the cockpit seems to have been revised. One may assume that it is now also coloured.

Rather a facelift with small technical changes?

Overall, it seems more like a facelift with minor technical changes. You can’t see a completely new design on the pictures. The performance data as well as the weight data should be identical to the current model, which also indicates that changes were only made in detail. However, the ZX-10RR should reach maximum power 300 rpm earlier than before, the ZX-10RR 500 rpm later. This is probably due to the conversion to Euro5.

We will probably learn more details on the 23rd of November. On that day the Kawasaki presentations will take place. Up to six models will be shown, although it is likely that some will be targeted at specific markets. 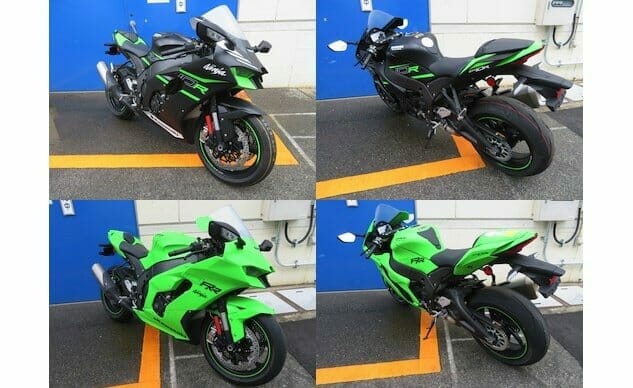