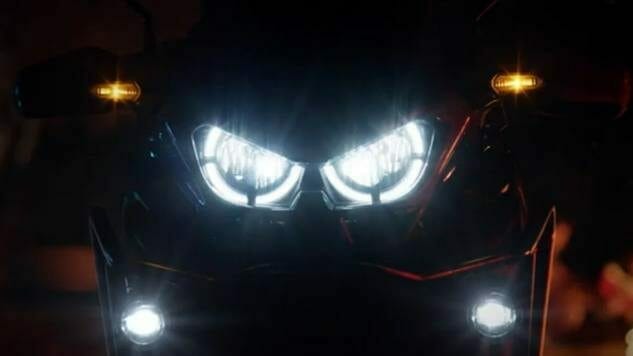 As previously reported, Honda teasered a new Africa Twin. However, one did not see anything in the first YouTube video. The font used in the well-known design and the track that drove the invisible motorcycle, left only conclusion.

Now a new video has been released, which is now clear what it is about …

In the video one can see the headlights and later also the schematic front of the upcoming Honda Africa Twin CRF1100L 2020. Since the bike has crash bars and additional lighting in the video, it can be assumed that it is the Adventure Sports version.

Under the headlamps could hide in the openings additional lighting elements. It could be a cornering light.

The date September 23, 2019 is displayed. It can be assumed that the official presentation will take place on this day.

However, it remains unclear whether it will also be the Africa Twin, which will be shown as a world premiere at the AIMExpo (America’s largest motorcycle show). Because the data does not match. The fair will start on the 26th of September.

So it remains unclear whether Honda will have a second launch for AIMExpo. Theoretically it would also be possible for the new Africa Twin to be presented on the 23rd and the data to be betrayed, but then it will be exhibited for the first time at AIMExpo and thus be seen live.

According to rumors, the new Africa Twin will get a 1,084 cc engine, which should perform 101 hp at 7,500 rpm. It should give them either with dual clutch transmission (DCT).