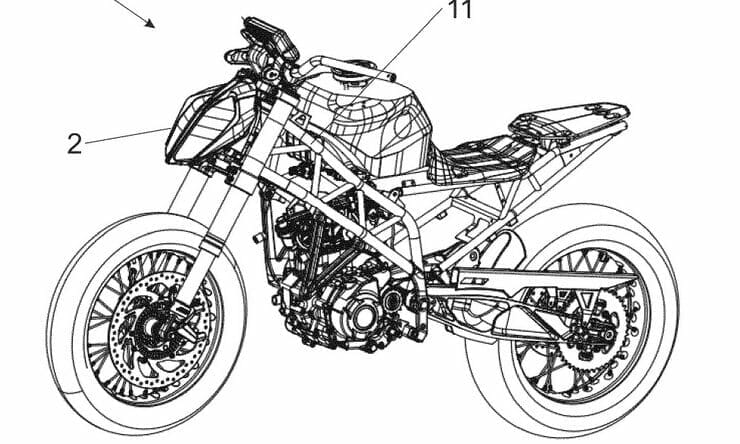 3 min read
New patent applications from KTM have surfaced that hint at a 390 Supermoto.

New patent applications from KTM have surfaced that hint at a 390 Supermoto.

The patent drawings actually refer to the upcoming radar system. KTM will also use the purchased technology from Bosch here, which is also used by Ducati and BMW. KTM announced the radar system back in 2018, and a new 1290 Super Adventure equipped with a corresponding system has also been seen. However, it seems that KTM plans to use the system in many more models.

What is interesting about the drawings is the model drawn. Basically, any known model could have been used, but it seems to be a future 390 Duke. Rumors about this have been around for a while. The engine looks the same, but it is in a different frame. The subframe and the fuel tank are also new. If you take a closer look here, however, you will discover wire wheels, which again points more to a Supermoto variant.

KTM also already made hints of this at an investor presentation, where they also showed future models on a diagram. On the chart, there are two blurred models under the Supermoto / Dual-Purpose category and the displacement 125/250/390.

Radar sensor in the headlight

The patent itself shows how the radar sensor could be integrated into the headlight. Two variations are available. As seen on the 1290 Super Adventure, the sensor is in an arc-shaped cutout at the bottom of the headlight. Another drawing shows the sensor mounted at the top of the headlight, which might be more suitable for more street-oriented bikes, where the headlight is usually mounted lower.

A third design shows the system on a round headlight, which KTM does not use at all. One may assume that these are preparations for Husqvarna, which like KTM belongs to Pierer Mobility AG. The sketch shows the sensor mounted in a bar in the center of the headlight. A corresponding bar can already be found on current Husqvarna models. This should also make it clear that Husqvarna will also equip its models with the corresponding technology.