Querly had to face the accusation of having driven an illegal race on 14. April 2022 in front of the district court of Bad Neuenahr-Ahrweiler. At about 12 o’clock the verdict was pronounced on the Grenzgaenger.

In the run-up there was already a hearing against two of the involved motorcyclists. On 14.04.2022 Querly and the fourth driver S. had to face the charges, including driving with inappropriate speed, grossly contrary to traffic behavior, driving at the highest possible speed (illegal race) and planning to do so.

The incident – reason for the charge

The incident occurred already on 18. May 2020 Querly and three other motorcyclists met for a motorcycle tour. They were equipped with helmet cameras and thus filmed the following incidents themselves. Thus, they also collected evidence that partially exonerated them, but also incriminated them.

In the evening hours they drove among other roads on the K18 near Adeau (Rhineland-Palatinate). At a T-junction, they wanted to turn around in order to drive along the winding road once again. At this time, the witness H. also drove onto the K18, directly before the four motorcyclists turned behind him. Finally, they caught up with H. in his car and overtook him. Witness H. then called the police and apparently reported that motorcyclists were driving up and down the road in racing style, endangering other road users. Shortly thereafter, witness H. reportedly saw the bikers again in a parking lot along the route.

A police patrol car drove to the specified track. In the curve area two motorcycles came towards them, which is why they braked and initiated a turning maneuver. The two motorcyclists evaded control and drove away. At the hearing, however, it turned out that there were still a few things to add and that one or the other had happened somewhat differently.

The scene with the patrol car was later uploaded to YouTube in the video “ONE LIFE – querly 2020”.

After the suspected drivers were identified, there were house searches. Querly and co-defendant S. had their driver’s licenses confiscated. In addition, data carriers and also two motorcycles used in the crime were seized.

As S.’s lawyer mentioned at the trial, the search is said to have led to very unpleasant incidents, which put a lot of stress on S. and his family. However, this was not discussed in more detail during the trial.

Willing to contribute to clarification

The two defendants declared their willingness to cooperate in the investigation. However, S.’s lawyer stated that it was not at all clear at the present time what exactly his client was accused of and how many acts there were to be. Accordingly, it was also not clear what the defense should look like. He stated that his client is aware of having made a mistake. However, they see these mistakes more in the area of misdemeanors and not in the area of a felony.

One of Querly’s attorneys (he was represented by two) stated that they felt that they were really looking for a crime here. Querly was also prepared to make a statement.

Querly was visibly nervous and dejected. He found it extremely difficult to read out the prepared statement. He had to interrupt several times because of the emotional strain and also apologized for it.

He stated that he very much regretted the end of the ride. He just wanted to see interesting routes with the others and have fun. In the run-up with the other drivers only in which order one would drive was agreed upon and to this one also kept. When the police came to meet them, he left the gas and just rolled on, then he continued his journey normally. He did not want to do anything wrong in the situation.

He stated that the situation and the incident were extremely stressful for him, including the house search at 7 o’clock in the morning. He already felt extremely punished, even though the trial is not yet over.

Questioning of the witnesses

Actually, the witness H., who called the police because of the driving style of the four bikers, should have been asked to testify first. However, he was not present and could not be reached by telephone at first. At a later time one reached him then nevertheless still. He had “missed” the appointment and could not appear at short notice because of his job.

However, the further course of the hearing revealed that the witness’s testimony was waived, so that the hearing did not have to be adjourned.

Only by video the drivers could be determined

Police officer L. testified that he had seen the relevant video on the Internet. It could be seen that the footage was relatively recent and the comments under the video indicated that it must be a stretch of road in the Eifel region.

He then telephoned colleagues in the area and asked if a similar incident was known. This was confirmed and L. was told that the incident was not currently being pursued, however, as no license plate numbers of the vehicles and no further leads were available. However, the video on the Internet changed that.

Next, the two police officers G. (24 years) and B. (26 years) were questioned one after the other. The two represented the crew of the police emergency vehicle and were thus involved in the pursuit.

Police officer G. stated that witness H. had reported four motorcyclists riding up and down the road in racing style in the early evening hours. On the spot, two motorcycles came towards them in the curve area, which is why they initiated a turning maneuver and took up the pursuit. However, after 500 meters they broke off the pursuit and stopped because the car was at the limit. The two motorcycles are said to have moved away so quickly that they could no longer be seen or heard at this point. From behind, however, two more motorcycles approached, which, noticing the police, turned and drove away in the opposite direction. With which speed the “pursuit drive” was accomplished, he could not say, since one would not pay attention in such a situation. The two motorcycles had been seen only in the curve when turning. On the following 800 m long straight they were already out of sight.

B. stated that witness H. reported an unknown number of motorcycles endangering other road users by their driving. According to his testimony, the chase had to be stopped because their vehicle could not take it anymore.

He could not estimate the way the motorcyclists were driving.

When asked, he explained why the pursuit had to be stopped after 500 meters and what was meant by the vehicle not having kept up with it. He stated that the vehicle was not designed for this. The brakes did not keep up, they were overheated and smoking. Therefore, the chase was not only stopped after 500 m, but also stopped to check the brakes. At this point, the other two bikers came from behind, then turned and drove away. He stated that they had an approach of about 15 to 20 km and the brakes were thus overloaded.

Following the questioning of the witnesses, two videos were shown, one showing the overtaking process in which the four bikers overtook the witness H. and the other showing the escape from the police.

The video files were played in full length and showed the video footage from the helmet camera of defendant S. It was seen how the group of motorcyclists was on the track. At the end of the track, Witness H. was seen entering the road and the motorcyclists turned around to ride the track again. They caught up with Witness H. on a curve and overtook him on a subsequent straight.

The judge, the public prosecutor and the defense attorneys subsequently agreed that there was no danger here and that for this reason the testimony of witness H., who was not present, could be dispensed with. As a result, the hearing did not have to be adjourned because witness H. had “missed” the court date.

Video “escape” from the police

The second video was also played in full length and showed the video footage of the accused S. The police car was seen coming towards them, braking and initiating the turning maneuver.

Querly, who was driving in first place at the time apparently went off the gas, was then overtaken by S., and was shouted “Go! Go on! Go on!” to encourage him to flee. The two continued driving, overtaking several vehicles. In one case, S. overtook a passenger car just before an intersection in order to then turn right, whereby the passenger car even already showed by signal that it wanted to turn left. Whether and how Querly overtook here could not be seen in the video, because he drove behind S.. They fled for several minutes and finally drove into a wooded area.

After the videos, it was agreed to dispense with H’s testimony. However, the judge indicated that he considered the facts of 315d (illegal racing) to be met by the flight from the police.

The attorneys for Querly and S. then asked for a 10-minute recess to confer with their clients. The break dragged on longer, as the prosecutor and the judge then discussed the facts and definition of §315d in general with the attorneys, but not in relation to the case at hand.

The two defendants S. and Querly then admitted to having fled from the police.

The end of Querly? – Unemployed – Reorientation

Since the fine is based on the earnings of the convicted person, the defendant’s current circumstances were also queried.

Querly stated that he was unemployed and currently had no income at all. He was not currently receiving unemployment benefits because he had a 3-month suspension due to his termination. When asked why he quit, he stated that the incident had put too much stress on him and it had all become too negative for him. He would like to reorient himself. He cannot say what he will or wants to do in the future. He would like to conclude the whole thing here for the time being before he can plan for the future again for longer than two weeks.

The accusations against the two were divided into two parts, the appointment to an illegal race, the drive on the K18 and the dangerous overtaking on the one hand – and on the flight from the police as the second. The first part could not be sufficiently proven, the second part was admitted by the two defendants.

Before the judge retired for sentencing, S. apologized for his actions and stated he would never do anything like this again. Querly also commented: “I think one can see it on my face that I regret it”.

The fact that it had taken a long time until the incident could be negotiated (among other things because of the heavy flooding in the Ahrthal) was taken into account positively in the sentence.

The two defendants had to get along without a driver’s license since the house search, which had an extreme effect on the environment and on the possibility to get to the place of work. S.’s relationship even broke down as a result. In addition, the two defendants had no criminal record.

The judge saw the facts of the illegal race (§315d) by the escape from the police fulfilled, besides that was also admitted by the two. The way in which they drove on the run and how they overtook before the intersection did not allow any other assessment. In addition it concerns after §315d to want to reach the highest possible speed, thereby this does not have to be necessarily also reached.

The public prosecutor, the defense attorneys and the convicted stated that they accept the verdict and that they do not want to appeal against it, thus the verdict is already legally binding. 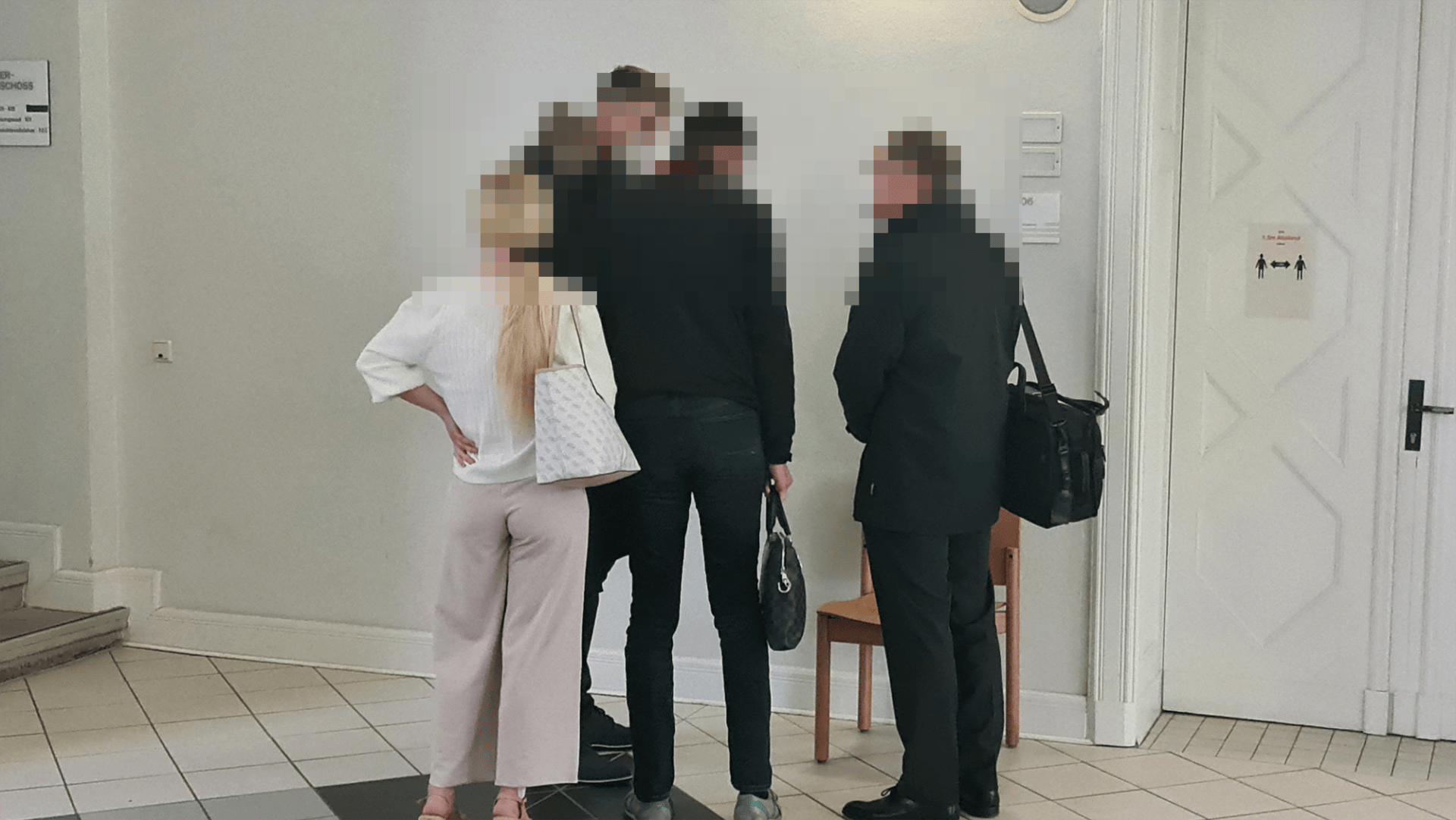