French bikers take to the streets

5 min read
As reported, France wants to introduce a technical inspection for motorcycles.  Bikers have already defended themselves against this with several demonstrations.  Apparently, the protest against the introduction must now be continued.  Now an open letter with interesting numbers was published.

As reported, France wants to introduce a technical inspection for motorcycles.  Bikers have already defended themselves against this with several demonstrations.  Apparently, the protest against the introduction must now be continued.  Now an open letter with interesting numbers was published.

What has made the French motorcyclists so angry?

Until now, motorcycles registered in France did not have to undergo a technical inspection of a control device at set intervals.  So there was no general inspection, even though this is required by the EU and France was supposed to introduce this by January 01, 2022 at the latest for motorcycles and scooters from 125cc.

In order not to upset motorcyclists, the introduction was postponed to 01./01.2023 and in the meantime it looked as if the required main inspection could be dispensed with, as the EU offers the possibility to deviate from this if other measures are taken to promote road safety.  An application for a derogation has been submitted to the European Commission.

Measures include a conversion premium for the purchase of an electric motorcycle, the introduction of “noise flashers,” penalties for unapproved or tampered exhaust systems, better education about the safety of two-wheelers (including equipment), the inclusion of this education in the driver training program for the B driving license, and the thematization of environmentally friendly driving and the avoidance of noise in the A1 and A2 driving licenses.

Reasons for refusing a general inspection

France’s motorcyclists oppose the introduction of a regular general inspection for motorcycles, as it would not only be complicated, unnecessarily costly and, above all, as it would have no direct effect on accident figures.  This has been proven by statistics showing that the number of accidents due to technical defects is extremely low.

Why demonstrations are necessary again now

In the meantime, it looks as if the application to the European Commission will be rejected, even though many of the measures to promote road safety have already been implemented.

The Fédération Française des Motards en Colère (French Federation of Angry Motorcyclists) is planning demonstrations against the European Commission’s impending rejection and against the introduction of a regular technical inspection.

In the meantime, the company has followed up with an open letter that lists some very interesting figures.

Did you know that a “report” initiated by Dekra (European leader of the car technical control) announces that 10% of the motorcycle accidents are due to a technical problem, while the really independent organizations count 0,5%? (MAIDS report)

Did you know that more than 3% of motorcycle accidents are due to road infrastructure problems and poor road maintenance? (Assurance Mutuelle des Motards)
Did you know that most manufacturers perform 50-point safety checks on their customers’ motorcycles at their dealerships, free of charge?

Did you know that 3.9 million motorized bicycles are responsible for only 0.5% of polluting emissions? (ADEME)

Now that you know this, do you think that a paying technical control will improve the safety and environmental performance of motorcyclists?
For us, it is a new “shot” without warning at the 3.9 million users of 2-wheelers! 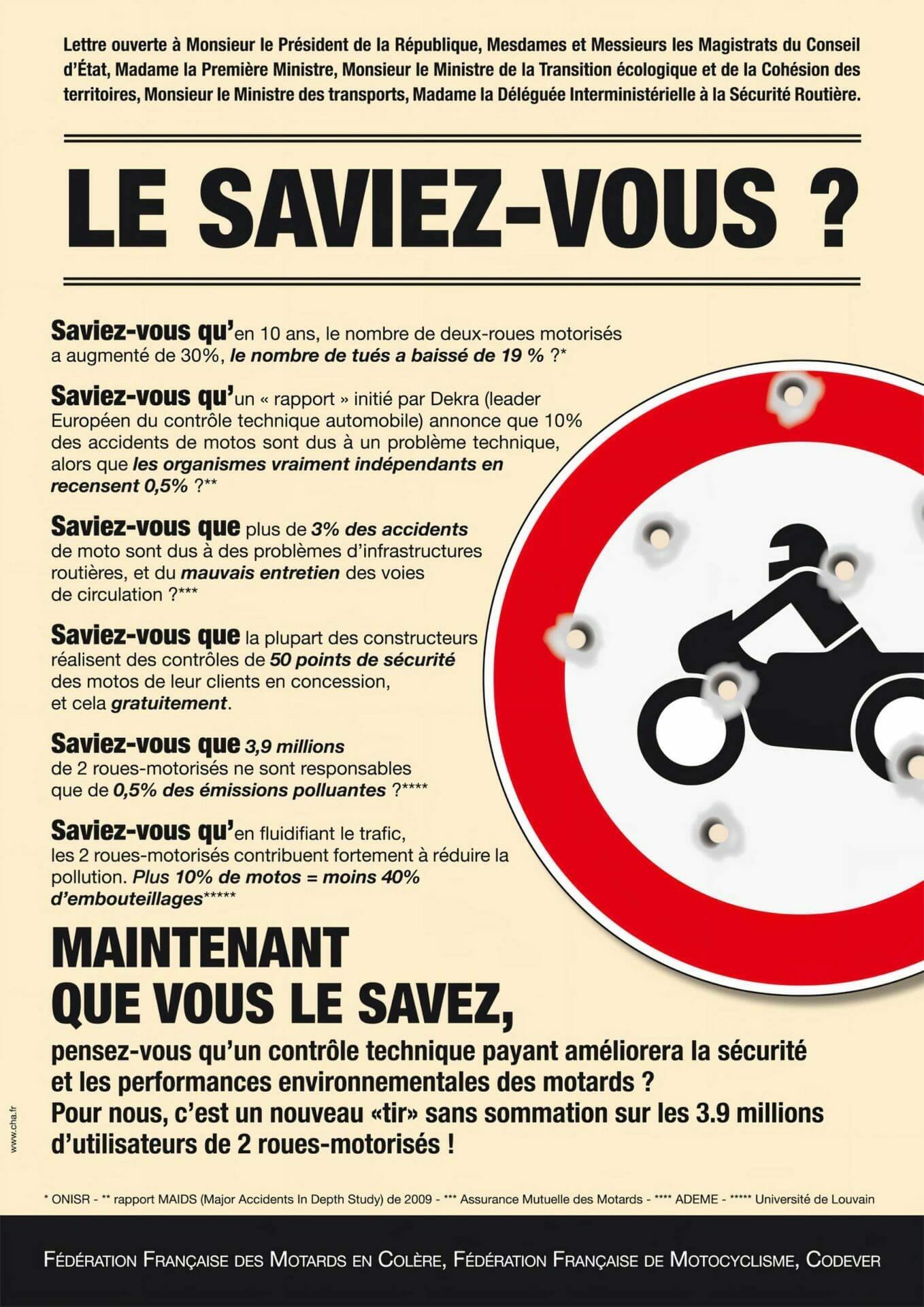