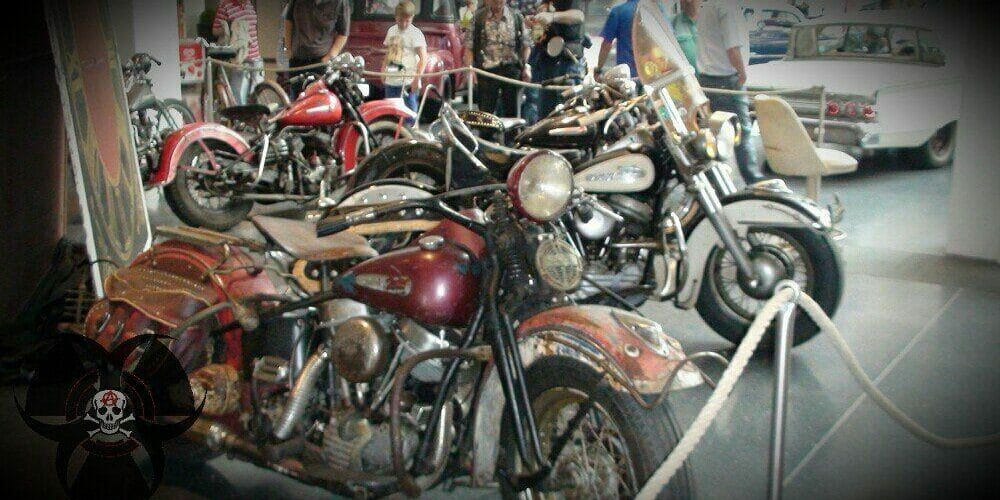 There was at the fair Klassikwelt Bodensee, as always in Friedrichshafen, some offered. One could admire the classic vehicles not only in the halls. Especially the cars and motorcycles with motor racing background has been moved on the track specially created appropriate to the species.

To be totally honest, I am pleased indeed always when one sees a classic car, a genuine interest I did not, however. Probably I just do not have the wherewithal, as one or the other, I would take already… 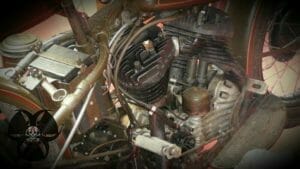 … All this faded into the background as I’ve heard from the Classical World Bodensee. Earlier this year I was on the motorcycle Bodensee and learned to appreciate what is called in Friedrichshafen as a “fair”. There not only musty halls with static objects. Here the fair breathes life into. Action is more necessary than enough !!!

[sam id=”2″ codes=”true”]Throughout the weekend there was show race with the old-timers. It was specially built a circular route on the fairgrounds. Here the old-timers were able to show that they do not belong in spite of her age on the scrap heap. 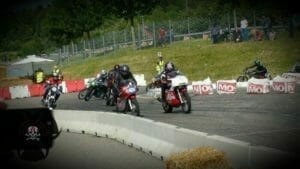 For cars and motorcycles there were different classes. The vehicles were divided according to age, performance class and race history. The owners of the vehicles could be no slouch carry her baby appropriately. Often one saw driving the fun, because one or the other let it rip correctly. In order to curve it went with the knee on the ground, out of the corner on the rear or in the drift, tires spun by and whined on .. The audience clearly had their fun and clapped each driver on the farewell round.

The motorcycle magazine MO and Glemseck 101 were also represented at the fair. The cult race at the former Solitude racing circuit near Stuttgart was transferred in smaller form, with 16 riders on the fair. The boys and girls made for a great atmosphere with their Cafe Racer.

[sam_ad id=”2″ codes=”true”]Driven was the 1/8 mile drag race in a pure knockout method here. Two participants compete against each other. Who loses in a race is out. In principle, it is normal Drag Racing. Combined with the great cafe racers and their drivers, who are also all appropriate types, it is a real show and very entertaining. 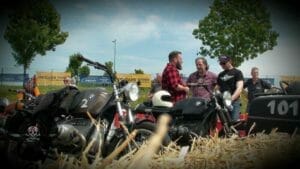 It has been well-tuned in to the Glemseck 101 this year. An absolute highlight in my diary which I’m really look forward to! A preliminary report is to follow soon. Who now wants to know more about it should look at the report from last year. 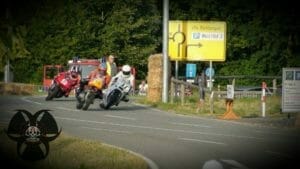 In the evening was offered to a big show. The Vintage Racing demo took place in the large circular route in and around the fair grounds. For this purpose, adjacent roads were closed and secured. The whole then even went to 21 clock! 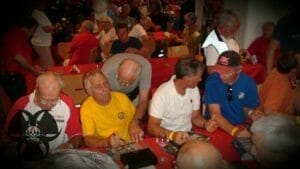 Sizes of racing, such as Giacomo Agostini, Heinz Rosner, Rudolf Thalhammer, Bruno Kneubühler, Gianfranco Bonera, Helmut Dähne, Peter Rubatto, Sepp Hage etc. drove with their original race bikes that show race. It alternated cars and motorcycles. It was clear the whole show only and there was no winner, but it was not a boring ride. Neither driver nor for spectators. Let the driver is usually quite already crashing. I was one or the other knee down, a spin and an engine explosion (both on a car racing) observed. Previously focused on the racing legends for autographs and photos. 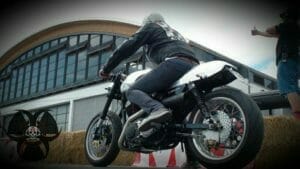 The paddock were freely accessible for visitors and vehicles you could watch the whole day precisely at your leisure. The owners also always liked were ready for a little gasoline conversation. One or the other had to also carry out minor repairs between the show race. Sure, old machinery, since there is always something to screw.

Oh yes, there was also the fair …

Shows so there was more than enough, and I did not even written until now by the Junghans time travel Parade or the airshow. In the halls, there was also plenty to see.

About 830 exhibitors from 14 countries were there. 38,500 visitors came for the weekend to Klassikwelt Bodensee, which means a new record attendance. 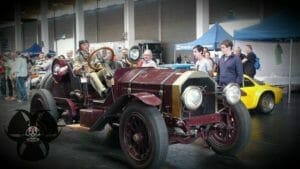 In a hall the correct old classic car stood. Prewar classic Junghans time travel, trade prewar classic and historic aircraft exhibition were to be found there. 50 different brands with more than 70 different models have been collected in the special show.

Dealer, restoration companies, accessories and tool providers, maintenance products, services, clothing, accessories – nothing you could miss the 2015 Classical World Bodensee. For this were over 12,000 m².

The Porsche legend was shown in a special exhibition. There were race cars, on unseen prototypes to Porsche–Diesel tractors to see some. 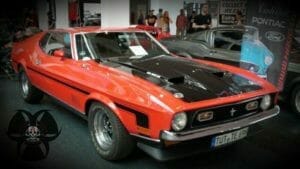 At the east entrance is received by the American Classics Exhibition. Motorcycles, muscle cars, pony cars, hot rods – everything was represented. Does anyone still “The Fall Guy”? One of the first vehicles that have welcomed me – and a smile was conjured me on the lips…

In a separate hall on 150 private vintage were offered. From absolute rarities, extreme alterations and normal young timers everything was represented here. It was discovered again and again another baby. Anyone who has had his baby was also a large number of accessories and spare parts. A highlight was the VW Bulli T1. 260 hp generates the revised and implanted in the T1 3-liter Porsche Boxter. Extreme lightweight construction drew the racing machine from (will be featured in upcoming video).

My conclusion to Klassikwelt Bodensee 2015 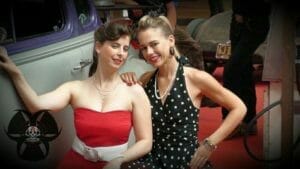 Although I would probably never have occurred to me to visit a classic car show (never thought to vintage to old motorcycles), I could rely on the kind of show in Friedrichshafen. I was not disappointed because it was a great event, which I would not have missed and to which I like to be back in 2016.

With all the shows really a lot was offered and one day on the Classical World Bodensee is not enough to everything in peace to watch. But the fair also went over three days, in which I was unfortunately only one there. For the shows on the race track stands were set up so that you could see really good. 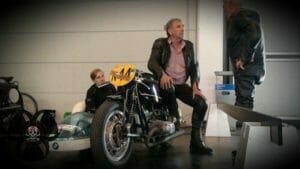 Just at the time the show race, emptied something the halls and you could take the vehicles exhibited good close look.

Unfortunately, I have not yet managed to make it to the video report completed. Once he’s done, I’ll link it here. In order not to miss the you should definitely sign up for the free newsletter. Simply enter the email address right in the sidebar. In the mobile version, the application is to be found further down. It will be worthwhile in any case! 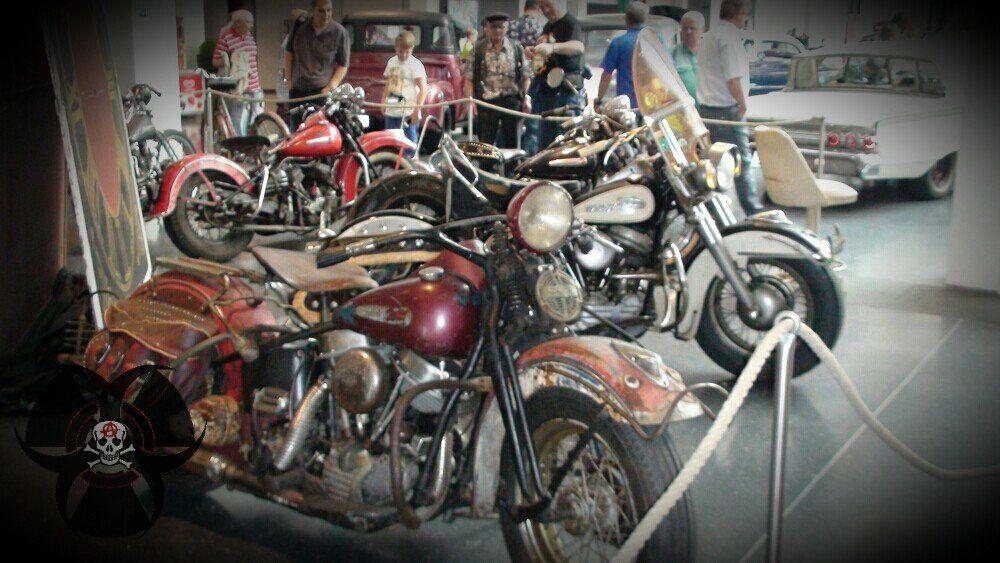