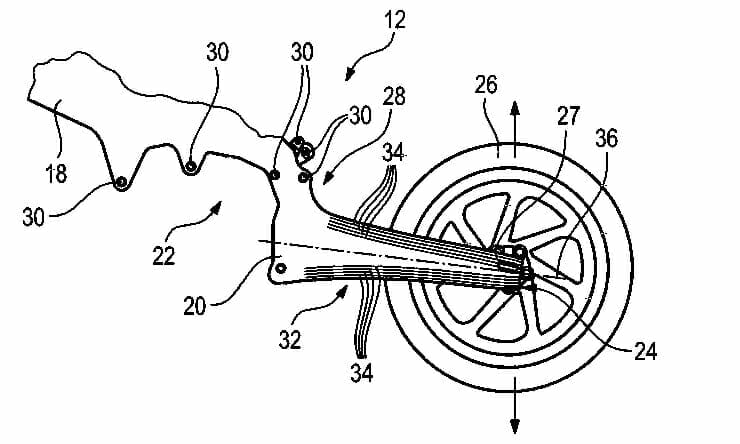 3 min read
They have already proven with the HP4 Race that BMW is a pioneer when it comes to carbon chassis. Now they want to take the carbon frame to the next level, as patent applications show.

They have already proven with the HP4 Race that BMW is a pioneer when it comes to carbon chassis. Now they want to take the carbon frame to the next level, as patent applications show.

BMW would like to develop a frame that dispenses with the use of a mechanically linked swing arm. The swing arm should become part of the frame. In other words, the frame and the swing arm are one part and not two parts connected to one another.

This immediately raises the question of how that should work and whether they want to do without damping? Or how the damping should work then?

There will still be damping, but the special properties of carbon fiber will be used. It can be constructed so that it is rigid in one direction but flexible in another direction. This would mean that the supposedly “fixed swing arm” bends and dampens itself, but remains stiff in the lateral direction.

A normal damper would still be used to control and adjust the stiffness or damping of the swingarm. With this construction, however, pivot and wishbones could be dispensed with.

This technology has long been used in racing cars to reduce weight and improve aerodynamics. So it is not a utopian technology, but rather tried and tested possibilities that are now to be adapted to the motorcycle.

As with all patents, one has to wait and see whether they are actually implemented. If this technology were to be installed in a series motorcycle, then it would be most likely in a successor to the HP4 Race.