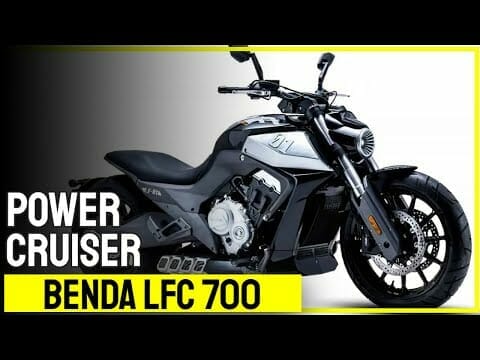 The first patent images of the LFC 700 appeared as early as July 2020. Even then, the visual relationship to the Ducati Diavel was recognized. In the meantime, the data of the new model are also known.

Propulsion is provided by a 680cc inline four-cylinder engine that delivers 97 PS at 12,000 rpm. Power is transmitted to the rear wheel via a six-speed transmission and chain. This stands out particularly visually. 310/35 18 inches is given for size, making it wider than most passenger cars. At the front, the tire dimension is 130/70 19 inches. The weight is given as 215 kg. The seat height turns out to be quite low at 695 mm. The top speed is said to be 180 km/h.

Another visual highlight is the under-engine exhaust. The exhaust gases are discharged via four square tailpipes located directly in front of the rear wheel. The LED headlight has a special design and is reminiscent of a turbine.

The handlebars are very wide. A TFT display sits in the center. The front is damped by an upside-down fork. Braking is by a dual disc system with radially mounted calipers.

It is not yet clear whether the model will also make it onto the American or European market.