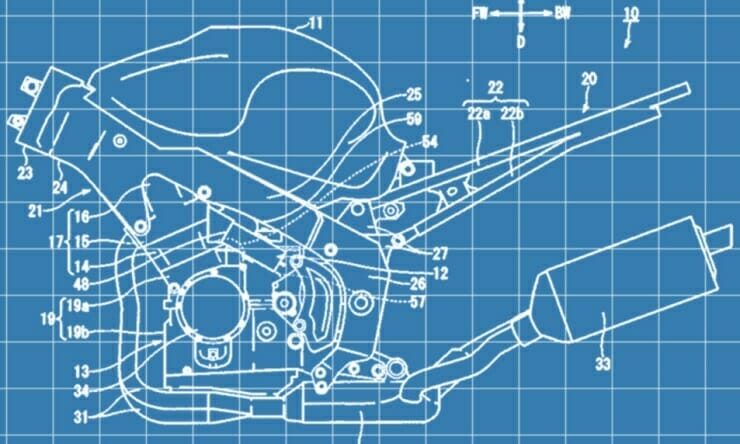 Because of Euro4, Suzuki had to take the Hayabusa off the market in Europe at the end of 2018. Since then, there have been rumors of a new Busa. Now it’s said to come back in 2021. (new patents posed)

Since the introduction of Euro5 was already foreseeable when Euro4 was introduced, Suzuki should have decided to develop for Euro5 straight away. The intermediate step of building a Euro4-compliant Hayabusa and then constructing it according to Euro5 shortly afterwards was to be spared.

The first patent shows a carbon canister that absorbs the evaporative emissions of gasoline vapors from the fuel tank. This is something that is mandatory according to Euro5 and the Hayabusa is still missing. The patent here refers to the exact location of the container and how it is cooled by an air stream.

The second patent is for the oil pan. They want to prevent the oil from sloshing around inside.

The drawings also show a completely new chassis for the Busa. The engine in it is rumored to grow by around 100cc. That would probably be necessary to maintain the previous performance despite Euro5. Many other manufacturers had to go the same way to get the old performance data.

Basically, not much will change in the engine, since according to the patent drawings it is visually identical to the known engine.

The exhaust system with the two side mufflers also appears to remain in place. There should also be enough space to install the additional catalytic converters.