4 min read
Cinema Mode
Isle of Man TT legend John McGuinness started this year for the 100th time at the most famous and dangerous road race in the world.  In honor of this anniversary, Honda has created a strictly limited Fireblade SP.

Isle of Man TT legend John McGuinness started this year for the 100th time at the most famous and dangerous road race in the world.  In honor of this anniversary, Honda has created a strictly limited Fireblade SP.

In addition to his 100th start at the Isle of Man, John McGuinness also turned 50 this year.  You could also see the Special Edition of the Fireblade as a small gift to the RoadRacing legend.

Honda presented the special model at the NEC Motorcycle Live Show in Birmingham.  Basically, it’s a 30th Anniversary Fireblade SP with a special paint scheme inspired by the racing machine that “the Morecabe Missile” competed on this year.  Only 30 copies will go on sale worldwide.  This number was chosen quite deliberately, as the Fireblade model has now also been around for 30 years.

Each copy is delivered with the corresponding number engraved on the steering head.  In addition, the racing legend himself has signed each bike on the airbox cover.

The package also includes a carpet for the bike, a cover and a crystal that shows the image of the bike through a 3D laser engraving.  When the motorcycle is started, there is a special animation on the display, a “Ring of Fire” is shown.

Probably the best part, however, will be that each buyer will be invited to the Honda Racing headquarters for the handover of the motorcycle and John McGuinness himself will hand it over.

The recommended retail price is listed at £30,000, while the regular retail price of a 30th Anniversary Fireblade SP is £23,999.

The 30th Anniversary Fireblade SP is an upgraded version of the SP.  It has been fitted with an Öhlins Smart Electronic Control 43mm NPX fork, TT-35 monoshock, Brembo Stylema calipers and master cylinder and an Akrapovic exhaust system.

John McGuinness: “The stars aligned for me to be back on a Honda Fireblade for my 100th TT start.  It’s an awesome bike and has meant so much to me over my career.  And, if I think about it, to so many other riders over the last 30 years too.  I’m proud of my connection with its place in TT history and of this, my replica.  There is no event like the Isle of Man TT in the world and this motorcycle celebrates Honda’s, and my own part, racing in it.  That feels good.  Really good.”

Neil Fletcher, Head of Motorcycles at Honda UK, added: “We are absolutely delighted to celebrate these icons and bring two such important names in racing together,  John McGuinness and the Fireblade, to make this special edition.  It gives those lucky few people their chance to own a bit of history.  We couldn’t be prouder of the outcome.” 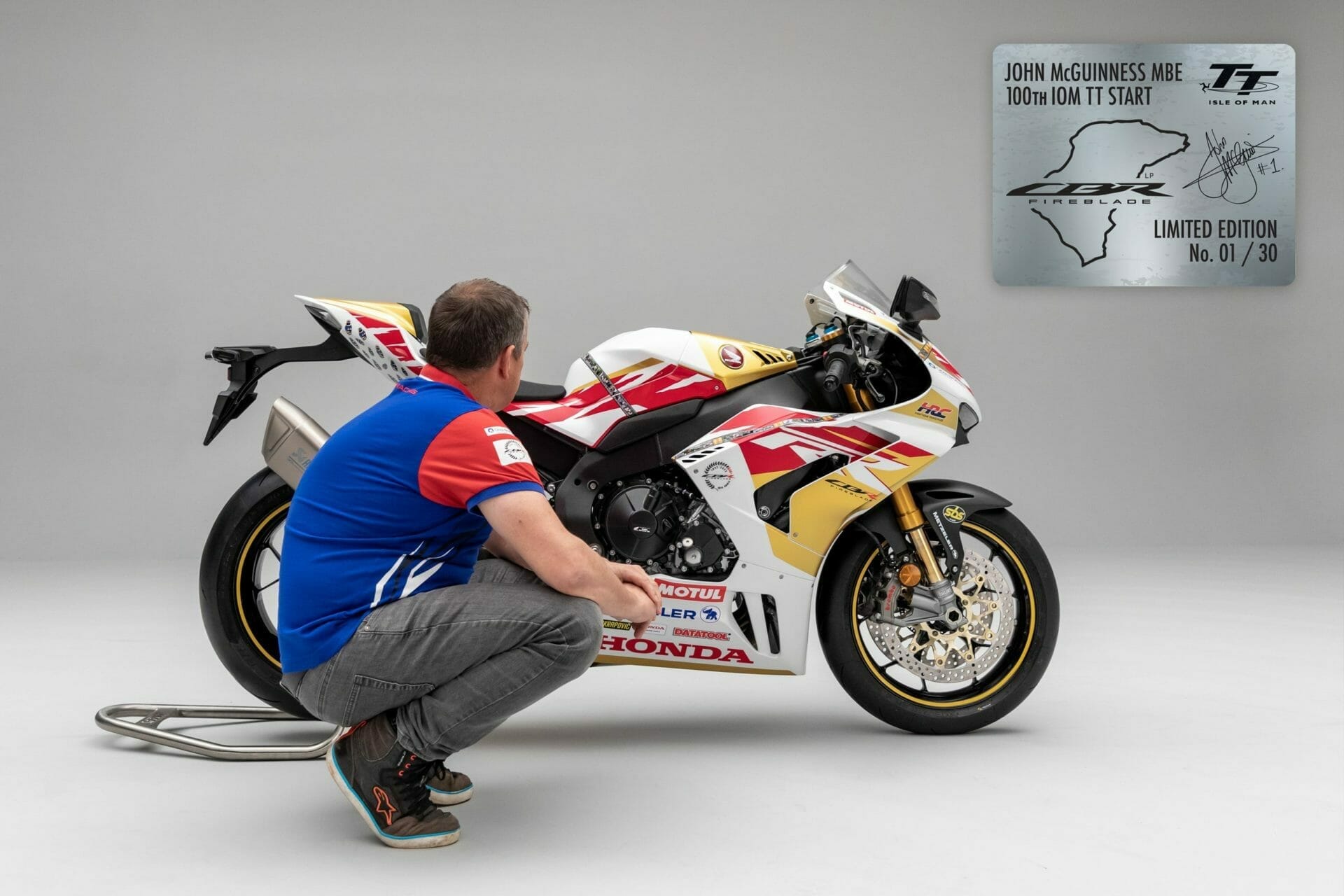