5 min read
Cinema Mode
Brice Hennebert of Workhorse Speed Shop has taken on the Indian FTR for a second time, and created the Black Swan with a hardcore 80s/90s charm.

Brice Hennebert of Workhorse Speed Shop has taken on the Indian FTR for a second time, and created the Black Swan with a hardcore 80s/90s charm.

After the AMA comes the Black Swan

Brice Hennebert has already created the cult bike Appaloosa (based on an Indian Scout) and has now also rebuilt two Indian FTRs. After the Workhorse FTR AMA now followed the presentation of the FTR Black Swan.

The idea came to Brice Hennebert during a drag race at Wheels & Waves against “Miracle Mike”, the Indian Scout from the Young Guns.

“During that time, I had the vision to build a sports bike for road use, really sporty, built like a GP bike. It’s deeply inspired by 90s sports bikes, all made from carbon fibre. The owner of the bike gave me total freedom around the project. So, I pushed all the levels to my maximum. That’s what happens when I have total freedom from the commissioners of a project. It’s pretty unique and the most complicated build I’ve done to date.” said Brice.

From clay to carbon

After making initial sketches of the bike, he headed to Slovenia to Akrapovic to let them build the 2-in-1 exhaust system. Back in his own workshop, he constructed a wire mesh around the FTR so he could model the body parts out of clay.

“This step was actually easier than I expected because I did not need to create a full symmetric body in clay, just one half of the bike as a master. Once I was happy with the shape, I used a 3D scanner to pass the form to Formae Design who worked with me to refine the virtual model, create the full-body symmetry, and integrate all the accessories and fittings. Christophe at Formae helped me a lot with all the different components of the body.”

A CAD model was created, which was then 3D printed and given to Robert Colyns. Eventually, a one-piece carbon body was created.

“As I’d decided to show off the carbon fibre and not paint it, I gave Robert the freedom to choose the carbon weave that would look the best and still work with the design I had given him. After a few weeks of waiting, he came back with this hell of a piece. The whole body only weighs about 1.8kg. Creating the bodywork was a major part of the build, everything but practical, but I was determined to have a one-piece body.”

Many parts were CNC-machined and custom-fitted. The headlight cover proved to be a challenge. The cover needed to open and close automatically.

“That was one hell of a struggle for me. It may look simple and easy for some people, but for me, that was quite a challenge. The ‘eyelids’ are driven by two stepper motors controlled by a Arduino for cinematic opening and closing.”

The swingarm was made from 7020 aluminum. The Piggyback shock is from Öhlins. For the brakes, they were able to use Beringer. This is a prototype and one of the lightest braking systems in their lineup, with the complete front wheel system weighing about one kilogram. Weight was also saved with the Rotobox carbon wheels, which were covered with Dunlop GP tires.

The seat and dashboard were covered in Alcantara by Jeroen of Silver Machine Seats.

“I would never have achieved such a complicated build alone. So many of my previous partners on Appaloosa stepped up to the plate, as well as a host of others, and I thank them all. I got a lot of pleasure working on this project and I hope that Black Swan gives the owner, and anyone who sees it, the same feeling.” 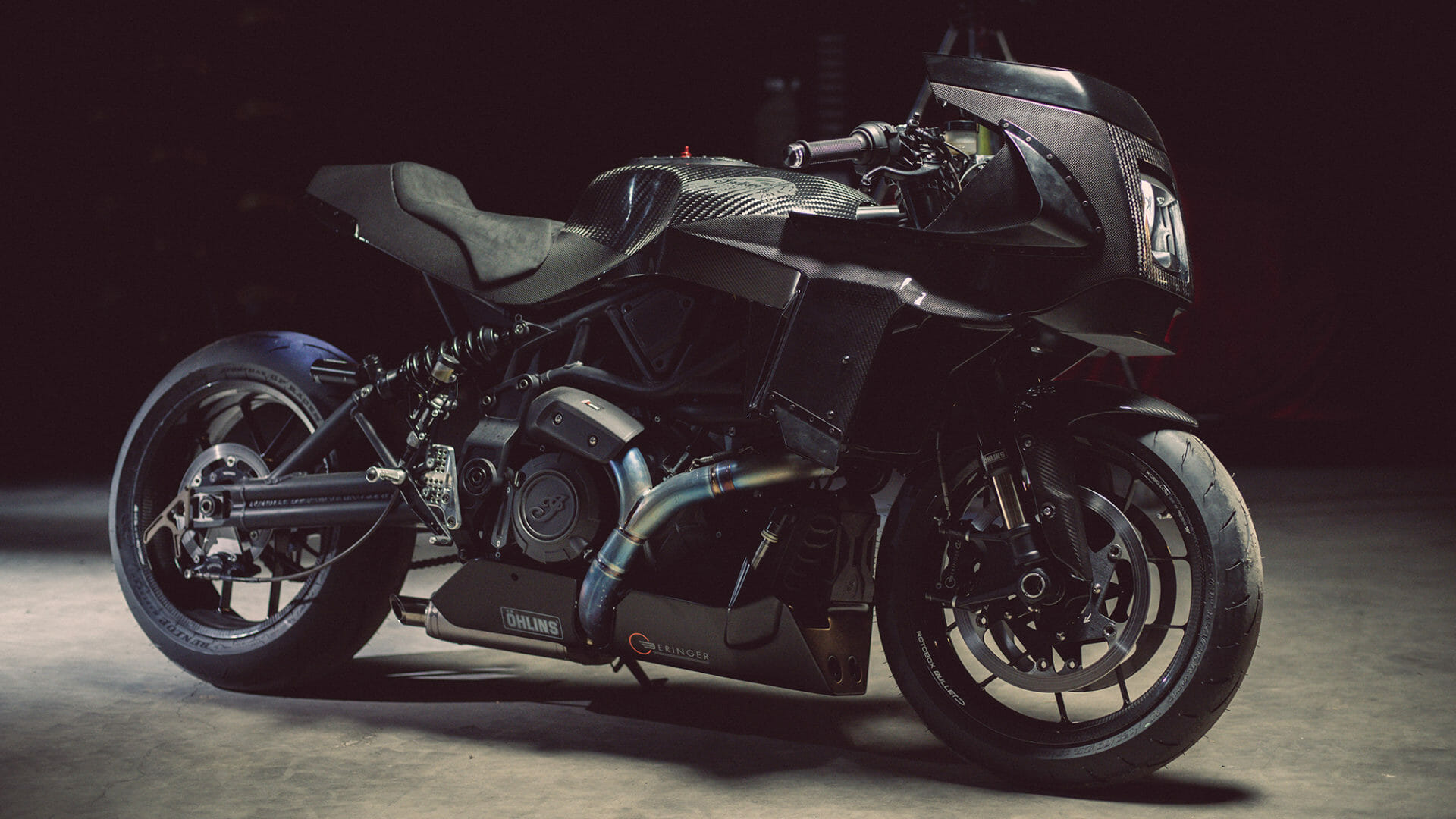