4 min read
Cinema Mode
At the 3rd episode of the Ducati World Premiere, the Italian manufacturer presented the Multistrada V4 Rally. In keeping with its name, it is suitable for longer tours, even off asphalt roads.

At the 3rd episode of the Ducati World Premiere, the Italian manufacturer presented the Multistrada V4 Rally. In keeping with its name, it is suitable for longer tours, even off asphalt roads.
The model is designed to provide greater comfort for both rider and passenger. The windshield has been increased by 40 mm in height and 20 mm in width. The rear end has been lengthened and the pannier mounts have been moved accordingly to provide more legroom for the pillion passenger. The new footpegs are also designed to reduce vibration.

The Multistrada’s familiar V4 Granturismo engine was already able to deactivate the rear bank of cylinders at idle and standstill to keep heat generation in check and save fuel. On the Multistrada V4 Rally, this is also possible while driving. Depending on the gear and riding situation, the rear cylinder bank is switched on or deactivated, which should lead to lower fuel consumption. This deactivation takes place in all riding modes. By quickly switching on the rear cylinder bank, the character and performance of a V4 is still to be ensured.
In addition to lower fuel consumption, an enlarged fuel tank of 30 liters is also said to provide increased range. The power remains at 170 hp (125 kW), but is only available around 250 revolutions later, i.e. at 10,750 rpm. Nothing changes in torque, which remains at 125 Nm at 8,750 rpm.

The Multistrada V4 Rally is equipped with the semi-active Skyhook suspension. Compared to the V4 S, however, the spring travel at the front has been increased from 170 to 200 mm. At the rear, the spring travel increases by 20 mm to also 200 mm. This also affects the ground clearance, which increases by 10 mm to 230 mm. To make it possible for smaller people to climb, the Multistrada can be lowered when stationary. In addition, the machine levels itself and adjusts accordingly to payload.
Lighter spoke rims in the familiar dimensions 120/70 ZR 19 and 170/60 ZR 17 have been fitted, and the brake discs have been increased by 10 mm to 300 mm. The engine guard was reinforced.
Wider footrests with a pronounced profile and removable rubber inserts have also been fitted.

The Multistrada V4 Rally is equipped with a wealth of assistance systems. In addition to Quickshifter, the Ducati Safety package and four riding modes, it has also adopted the radar system with adaptive cruise control and blind-spot detector.
The new Power Enduro mode is intended for unpaved terrain and throttles power down to 115 hp, though the throttle is still said to respond very sensitively. Enduro mode disables lift-off detection, the ABS cornering function and rear-wheel ABS. Of course, the chassis is also adapted to the changed circumstances.
A remote start function is new, with which the Key-Less-Go ignition has been expanded.

The Ducati Multistrada V4 Rally is offered in three versions. The basic version already includes the radar system. The “Adventure Travel & Radar” additionally has heated grips, heated seats and aluminum side cases. The “Full Adventure” also has a carbon front fender and an Akrapovic rear silencer. 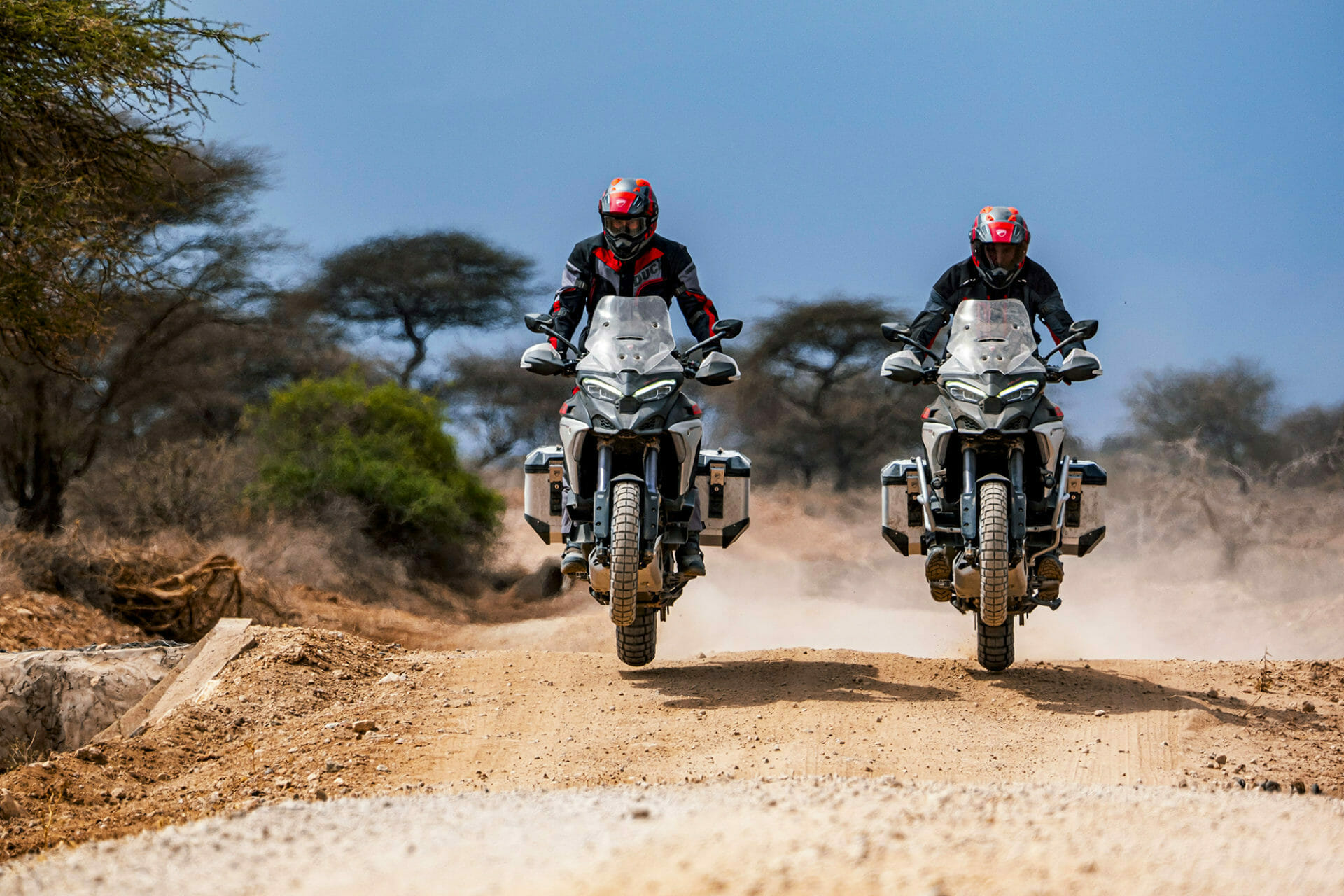