– Alone and easily lift the motorcycle so that both wheels are in the air and one the second stator saves, plus being able to push the bike into the smallest niche – the promise of ConStands centrestand of BS-Motoparts.com

[sam id=”2″ codes=”true”]As the motorcycle season slowly coming to an end and then usually some pending work or winterizing the motorcycle, I’ve tested the ConStands centrestand of BS–Motoparts. The whole basis of a Yamaha R6 from 2005 in the Valentino Rossi Edition. It is available but for all current and current motorcycle models. The whole I have held in a video showing also assemble.

What can the ConStands central stand ? 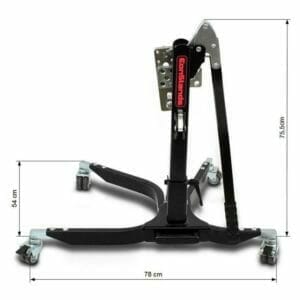 The Motorcycle stand lifts the motorcycle to complete, which can be seen in the video below. Both tires are in the air. This can be accomplished very easily by a single person and also costs no effort. It is mounted on rollers and thereby the motorcycle can be pushed into the smallest niches as the rank the motorcycle deleted. To ensure a safe stand are provided with a brake two wheels of the stand. The bike is so agile than ever before. Through a built-in fuse the bike can be locked at different heights.

Since you, depending on the repair, a Motorcycle stand for the front and one for the heck needs, you may save a one by the stand of BS–Motoparts. If one is traveling by motorcycle so is not so much in the garage around. In order to properly stow him better, you can also fold the stand ConStands central, saving additional space.

If the central rack (Motorcycle stand) suitable for repairs?

To make it short, yes. He lifts the bike highly reliable and safe, so that both tires are in the air. The dismounting of tires, a cleaning of the machine or the application of the tire warmers on the track is not a problem. For the ever-accumulating care, it is also a definite plus. Greasing the chain falls easier than ever. Jack up the motorcycle, motor on, first course in and chain spray sprayed.

The assembly of the motorcycle centrestand

Delivered is everything you need for installation, except for the necessary tool of course. A very detailed and illustrated assembly instructions are included with the package. The necessary tools should have at home each craftsman. It needed several screws, allen and a torque wrench. Torque information can be found in the instructions.

Installation is easy to perform with minimal technical skills. As can be seen in the assembly video, you can also easily perform the most alone. I have tested the stand using a Yamaha R6, year 2005, Valentino Rossi Edition. At other motorcycles the assembly should be quite similar. At the motorcycle only has one screw of the engine mount expanded shortly and be mounted again instead of the nut with a socket. Large or striking changes there on the bike is not so.

The assembly of the lever on the Motorcycle stand needs a bit of tact, since making the washers like to own. Accurate you see in the video.

When setting on the bike but you need some help. To be able to adjust the angle of the adapter plate properly you need your hands free. A second person must just keep the bike at this time. But it takes the whole effort only 30-60 minutes.

Winterizing on the Motorcycle stand

Over the winter, should the bike not be on the tires because it makes use of this otherwise flat. If you have no way to jack up the bike, the tire pressure should at least be raised. Often it is so that the tire loses pressure over time, which could result in “flatten” again.

These problems are not with the stand. Jacked, pushed to the front of the garage wall, covered and well until the spring. He keeps the bike easily and safely in the air.

The ConStands centrestand of BS-Motoparts.com delivers what it promises. He is very well made and provides a secure stand for the motorcycle. The installation is not performed difficult and relatively quickly. The fact that you can fold it, it is space-saving storage.

As in this case with the Yamaha R6 fits the silver box not quite the black frame. Who bothers you but it can easily be painted or powder coating can be, what will happen in this case yet.

Overall, I can, however, express a clear recommendation, the many advantages over a normal Motorcycle stand are obvious. Bearing in mind that you need only one rack to the bike completely raise, the price is also more than okay.

Should anything go broken or lost, there are some parts of the central stand to be backordered. 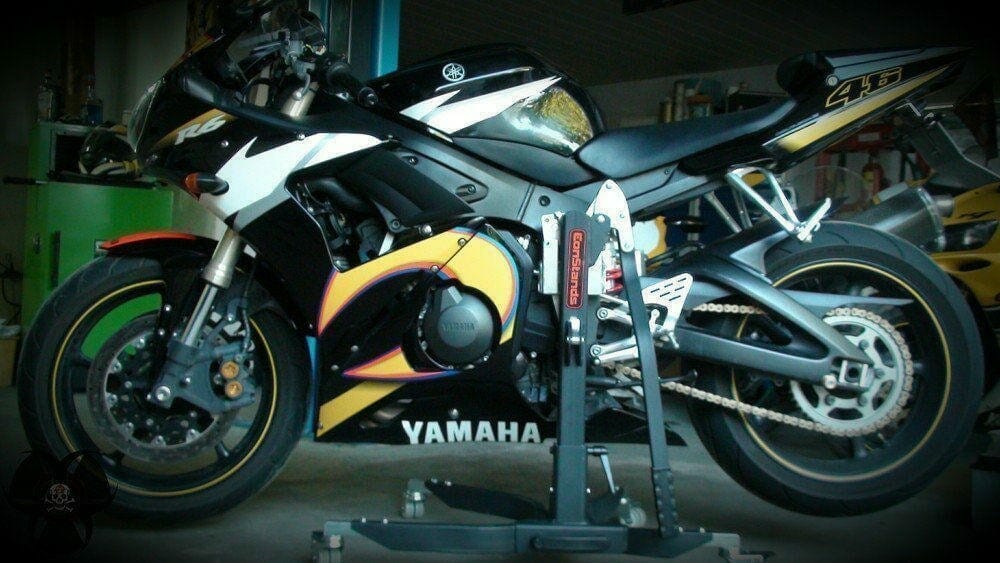