8 min read
Cinema Mode
With the M 1000 RR, BMW has introduced an update of the S1000RR that offers a thoroughbred racing technology for the highest demands in motorsport and on the road. It is the first M model from BMW Motorrad.

With the M 1000 RR, BMW has introduced an update of the S1000RR that offers a thoroughbred racing technology for the highest demands in motorsport and on the road. It is the first M model from BMW Motorrad.

The performance has been increased again compared to the S1000RR, and the weight has even been reduced. The M1000RR has an output of 156 kW or 212 hp at 14,500 rpm, which is 5 hp more than the standard model. The maximum torque of 113 Nm is available at 11,000 rpm. It should be noted here, however, that BMW has always been quite conservative about the horsepower output. While other manufacturers are more ” generous ” with the power rating, BMW has always put the horsepower at the lower end. The new M 1000 RR should therefore have at least 212 hp.

The engine of the S1000RR was extensively modified in the direction of racing. The maximum speed was increased by 500 rpm to 15,100 rpm. The engine was fitted with 2-ring forged pistons from Mahle. The combustion chambers were adapted. Longer and lighter titanium connecting rods from Pankl were used. The conrods are narrower and lighter. The intake ducts got a new geometry. Camshafts and intake tract were optimized. The compression was increased to 13.5.

The engine is now even more powerful in the speed range between 6,000 and the maximum speed of 15,100 rpm. At the same time, it should not lose anything in terms of country road qualities.

In addition to the weight reduction, which was also partly implemented on the engine, the use of a titanium exhaust system saved another 3.6 kg. 192 kg are indicated as ready to drive weight. The S1000RR weighs 197 kg, but by using the M package the weight could be reduced to 193.5 kg.

Aerodynamics is also becoming increasingly important in motorcycle racing, which is why the BMW M 1000 RR was also fitted with winglets that provide more downforce at the front. They are made of lightweight carbon and were developed in the wind tunnel to achieve the best possible performance.

Due to the aerodynamic downforce, an additional wheel load is generated at the front depending on speed, which counteracts wheelie inclination. This means that the traction control system has to intervene less and more drive power can be effectively converted into acceleration. Faster lap times on the race track are the result.

The winglets also have an effect on cornering or during braking maneuvers. The cornering stability is increased and the contact pressure allows later braking.

Upside-down fork and rear damper were optimized to achieve the best possible lap times on the race track. The chassis was uncompromisingly designed for the racetrack, but should also have country road qualities.

The focus was on optimizing the handling, better braking and starting nick compensation and the best possible feeling for front and rear wheel. The geometry was also adapted to optimize the wheel load distribution. The pivot point can now be adjusted to a wider range.

The M 1000 RR already has the carbon wheels that were otherwise included in the previous M package of the S 1000 RR. Completely new are the BMW M brakes, which have been developed on the basis of experience gained in the Superbike World Championship. They are designed to offer maximum fading stability and controllability. The blue anodized finish and the M logo also make them visually appealing.

The instrument unit is largely the same as the one in the standard model. An M start animation was added. The M Competition package can be unlocked by a code. The OSB interface of the instrument combination can then be used to provide data for the use of M GPS Laptrigger and M GPS Datalogger.

Optionally a milling package, a pillion package, an M Carbon package and a 220g lighter swingarm are also available.

The highlights of the new BMW M1000RR at a glance. 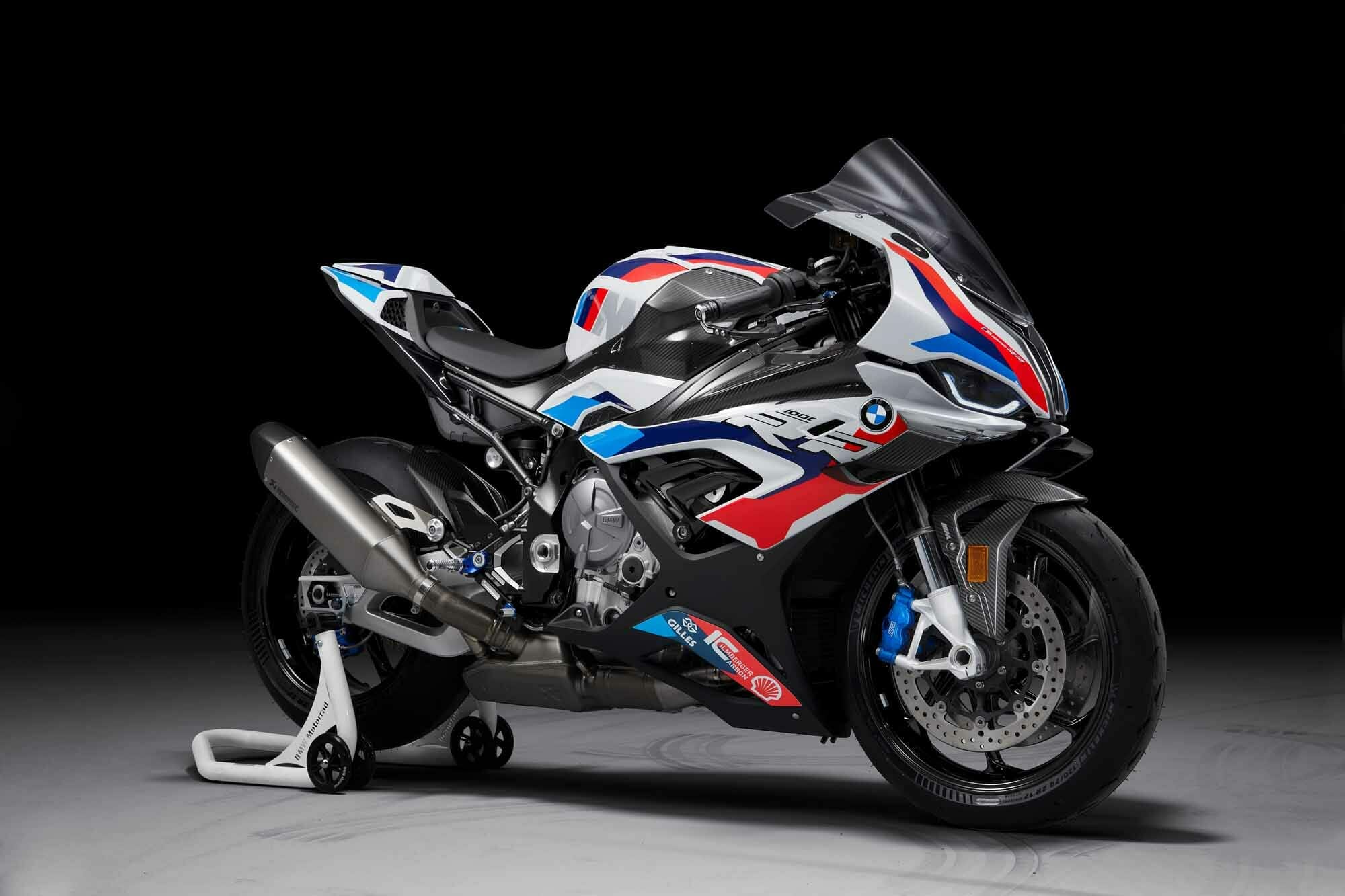