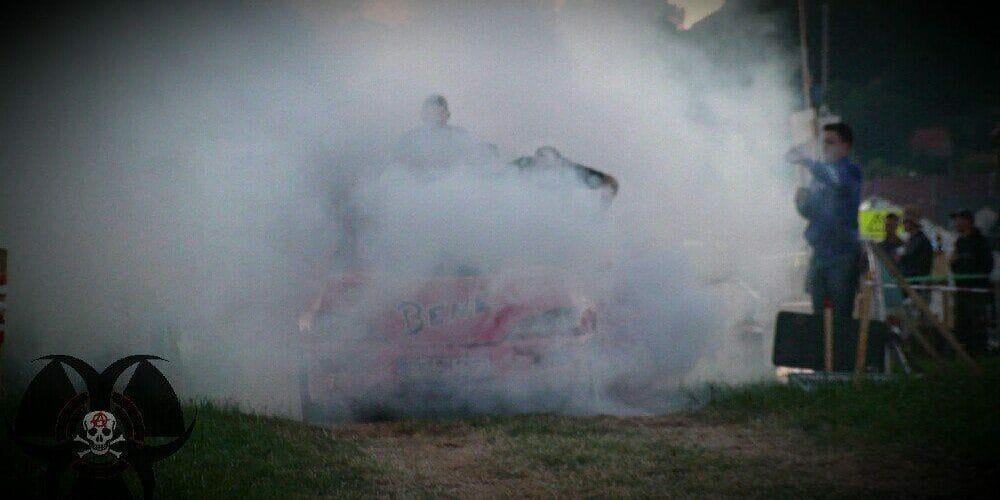 Anyone who has read the first part could already find an impression of the weekend at the MotoGP and at Ankerberg. But it was only the beginning, the madness went further…

The first night at Ankerberg – short, cold and noisy

[sam id=”2″ codes=”true”]After we drove on Friday early in the morning, spent the day on the race track and had observed the goings on Ankerberg evening, it was time for some sleep. When we are in the tent I do not remember, but the hustle and bustle of the party area was in full swing. On stage, still played a Rammstein tribute band (were really good), the Party tower heated the people and on the “small Herbert Street” was further stripped hardworking. 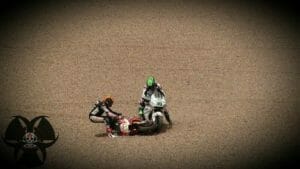 Our tent neighbors were on the vast grounds of the Anker Berg and it was relatively quiet. Well, if one disregards the music of Party tower, the Rammstein cover band, the occasional fireworks, the motors in the limiter, etc.. But that was not anything in the immediate vicinity and the fatigue lies asleep us. 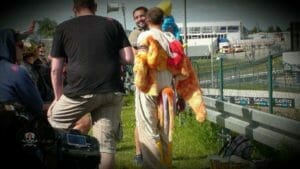 In addition, it was quite cold. The day front #GermanGP were partly extremely hot, but on this night it was really disgusting cold. Asleep again other neighbors reported back with a roaring engine. Three gas shocks – Engine hot – on the limiter … 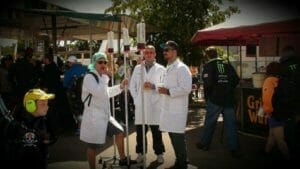 Next time when I woke up was “Greek wine”. My alarm clock I have not heard … OK, was a short night, but for sleeping we were not here … got up and orients only once. We had not even seen where the toilets were in our tent area. They were just around the corner. With outdoor sink to brush your teeth and shower containers. – Optimal. One only had to wait a bit, because a small snake had formed. Women there had as exceptionally easier. Since most Ankerberg–campers are male, there were no queues at the girls …

As already mentioned, we moved the the lack of sleep so by consistently.

For breakfast there was coffee, scrambled eggs and hot-running engines 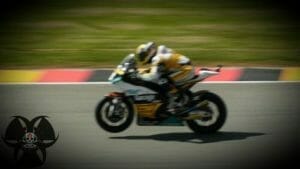 Being back at the race track itself reported the hunger. Behind the grandstand T2 (like everywhere else), there were many stalls. Merchandising, beer, ice cream, fish, grill goods stalls – there was almost everything a stand but also partly with dramatic rates.. We landed at the field kitchen and got a cup of coffee for 5 euros, scrambled eggs and bread. The egg looked optically not so good, but it was all delicious. Can I really only recommend!

On Saturday, the last workout, then the qualification were announced. This was evident to the visitors. There was a lot busier than it was on Friday. The weather was much better. On Friday afternoon until quite cold on Saturday quite warm and sunny. – Same time brought a sunburn

And what was with the MotoGP? 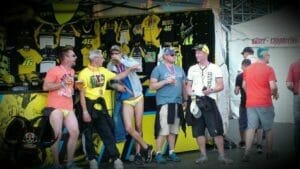 I think I let the Grand Prix a little bit aside. Meanwhile, well, everyone knows how the race went out and as already mentioned, has probably everyone who has viewed the races on TV more than we noticed locally.

The problem with the thing is that we got via speakers moderated the event, but we could not hear it. Are motorcycles down, they were just too loud. During the breaks, but unfortunately nothing was said by. So we knew partly what about the fallen riders … On screens the program of EuroSport was indeed transferred, but since you got is not always everything.

The Driver presentation in the Karthalle 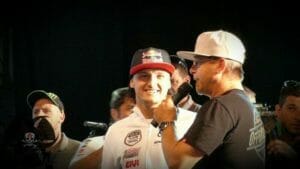 In the evening the track was opened for all. They came in without a card to have to show. This was also true for the Saturday as the drivers should be presented in the Karthalle.

Learn, we have it only by the 10th € expensive program booklet. We were very curious if real driver will be there. At 19.30 clock it should go. We were there an hour early and were able to secure seats near the front. 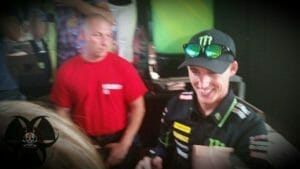 Best Bradley Smith and Pol Espargaro have liked me. When they were done with the interview and the next driver came on stage, they over the Security to the stage and at the barriers to the viewers. They made Selfies and signed autographs. Later, also made a few other drivers. The whole I‘m detained with the Cam and is also shown in the next video.

Toll, which have shown such a fan near many drivers!

Here have wirerst experience that Cal Crutchlow, who was supposed to be here, was in the hospital. He probably broke his arm. On Sunday, however, he is then but drove. Was probably luckily so bad not. Marco Melandri also no longer drove. Aprilia and he has canceled the contract well !? Well as I said, the whole weekend was hovering a big question mark over our heads … 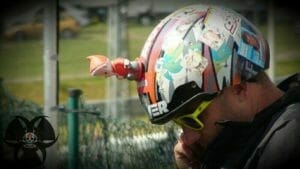 After the driver’s imagination bands were still playing in the karting hall and you could still celebrate something. For us, it moved again to the Ankerberg. So get off the racetrack grounds, across the street and you’re standing at the foot of the Ankerberg.

Here are a few ramps were installed and it was a freestyle motocross show. I believe quite Hohenstein-Ernstthal was a single party. Who knows what we’ve missed anything … 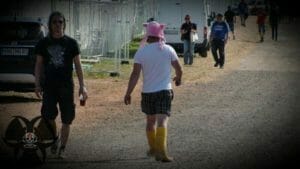 Once again the top of the mountain the party area was really crowded. In the night from Friday to Saturday was already well what’s going on, but now it was much more …

The whole mountain was dancing and celebrating. No wonder that many only to celebrate sublime come here and not be interested in the MotoGP. Others are the next day no longer be able to visit the MotoGP. Alcohol corpses seen it but really quite rare. Just as stress. Here are all together at the Celebration. Crazy with crazy that‘s just right! 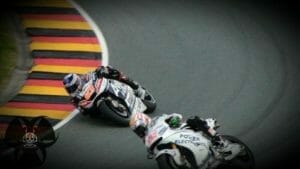 Having arrived at a tent where people were just at parties, much to a guy. Topless, the beer belly freed, he pulled off his show and danced like a stripper to the music. Slinky licking lips, stroking his nipples, he went off really well and had enough intus … He danced around with the people around him, shot them kisses and dredged them. The best thing that people do not know him. He was at once the fence and as he asked as coming in and already was celebrated together.

Suddenly loud crash near. Fireworks is quite normal here but briefly probably a few tents have shot each other. It was really fun to watch as it flashed around the tents around in bright colors and slammed.

People danced on their trailers. Tent areas were marked with country flags or road signs. In the distance you always looked somewhere fireworks or smoke from a burnout, accordingly, always the smell of rubber. 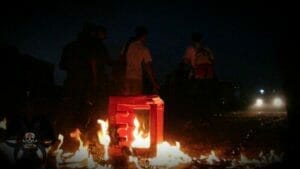 Eventually we came to a small fire over on a road and saw in the distance already blue light. It came closer. I think it was a Trabi with the words “Mountain Rescue” on the side, who drove around the fire and disappeared – nicely with Martin Horn.

Motors were dragged on the Ankerberg, up and running with the basics and spin-up only to have them as long until they ran high.

The rest in brief

After another short night, the race was their turn. Whatever the reason was at the end of the MotoGP, at the foot of the grandstand to the track, all with full police. As far as I‘ve noticed that was only at our stand that. So I have at least not arrested 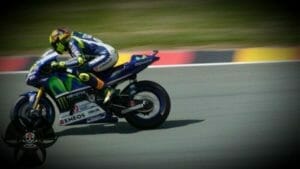 On Ankerberg back it dammed up on the descent from the mountain. Police have everything turned into a one-way street and there seemed to be only one exit. Clear the the jammed. After a time we went. A surprising number were anyway already left. The race then they have certainly not seen … Where you from AnkerBerg also has a great view of a large part of the race track.

All in all it was a really exhausting but sooo brilliant weekend! I‘m looking forward to next year when it‘s time again !!! Of course, again at Ankerberg Mountain! So we‘ll see you there

Rejoice ever onto the YouTube video. I hope I can do it on the weekend !!! Hopefully it can then the mood and the madness of the weekend better convey than me, because everything that I’ve written so far only scratches the surface !!!

To first part of the Report –>

to the picture Gallery –> 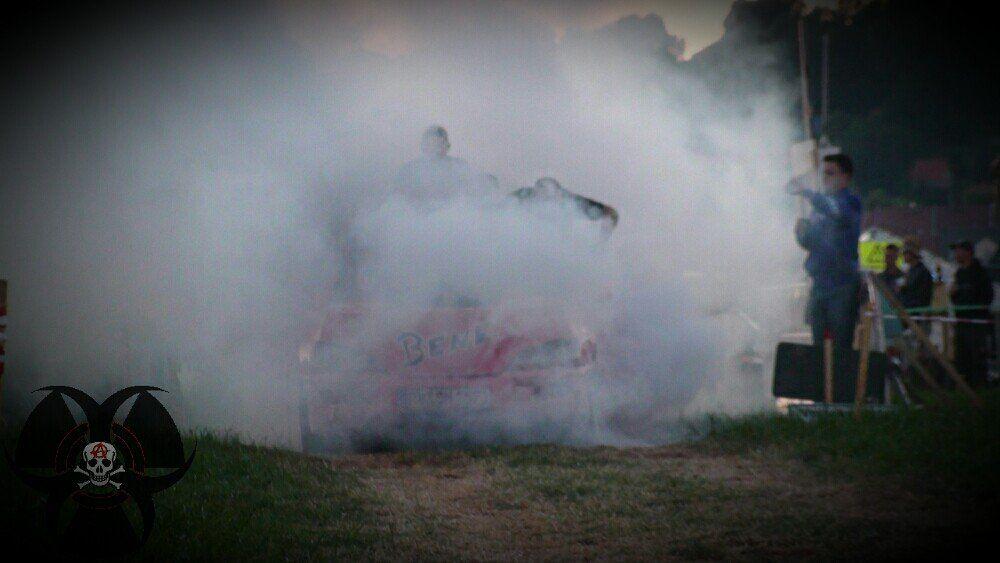