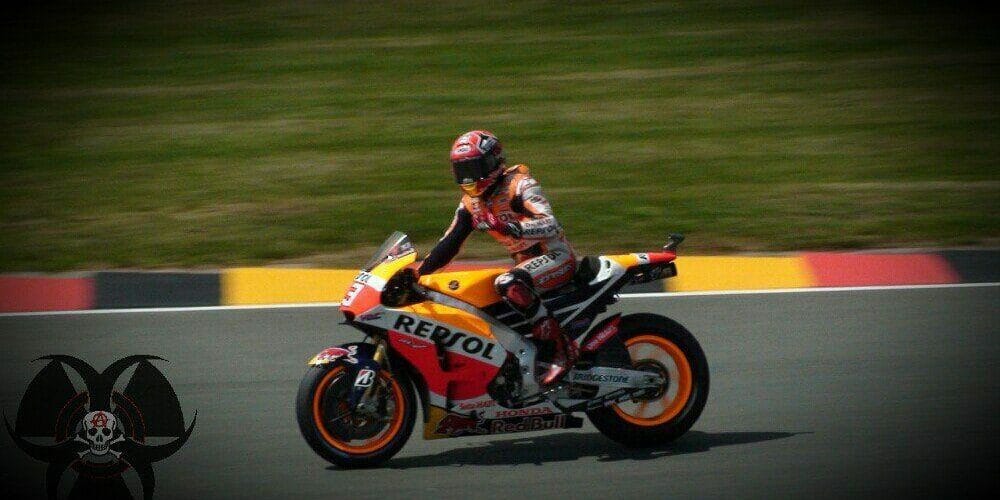 To the craziness of Sachsenring 2015 – MotoGP and Ankerberg

Last weekend there was in Hohenstein-Ernstthal again a state of emergency. The MotoGP was at the Sachsenring. The biggest motorsport event in Germany. The biggest and craziest party in Germany ran parallel to the Ankerberg. Awesome!!!

[sam id=”2″ codes=”true”]In order to take one equals times ahead, I’ve not seen on television and called also no information about the weekend’s races. I just want to play my impressions. This also means that you will notice much less than through television and the media. Somehow paradoxical, since one was indeed live here, but I’ll explain more …

The MotoGP experience, true to style all weekend long, with night on the Ankerberg 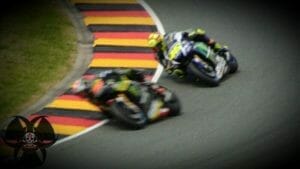 In advance I organized the cards. Three days in the stands T2 (grandstand at the first right turn after the start / finish) for 155 € per person. Then there was the Overnight. From Ankerberg heard much, I had my course times view. For 140 € I could, my girlfriend and our car there camping.

Since we did not get the car into the tent, it had but then stand next to the tent, the price remained the same… 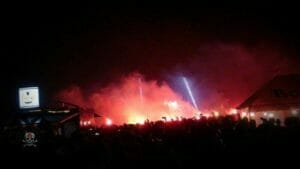 On those arriving by motorcycle, we have deliberately omitted. Two years ago, a broken engine on the highway has cost us the entire Friday. By car, it is not really true to style but more practical.

What you get for the money?

What does the MotoGP to offer everyone knows who reads this. To be there live and to experience at first hand the whole thing must have taken. 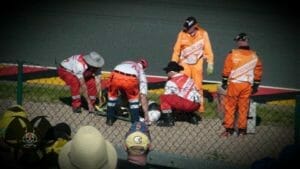 In the grandstand T2 is very good and therefore expensive seats. Other stands are partially effective and there are also very many standing passengers. Here you can search on the site‘s place himself. Many swear by it, because the mood is supposed to be even better here.

On the Ankerberg one gets his campground for the money. Toilets and showers are adequately prepared and really clean. You sleep in close proximity to the race track (when coming for to sleep) and has a folk festival and a huge party in front of you. 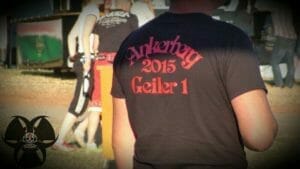 The ribbon for campground you will also receive access to the absolute chaos. Motorcycles, bikers, alcohol, camping, go with the guys, alcohol, party, motorcycle racing, I’ve already mentioned alcohol? – This leads to the most egregious Party in Germany. Here there is probably nothing that there is nothing and also a lot more … But for I come yet …

It started with lack of sleep and we moved consistently 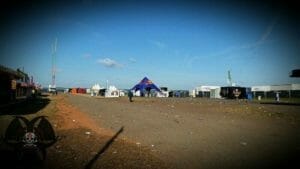 Actually we wanted to arrive on Thursday evening / night, we arrived but it was only on Friday in the morning … In Hohenstein-Ernstthal we sought first the driveway to Ankerberg. After some time, we have also found. The Security piloted at the right entrance. Partly, at least, since the last of which we passed chased us back from the mountain because we were supposedly taken a wrong turn.

So again from the beginning, and lo and behold we were right. Being back at the jokers they would not let us turn right again. After a bit of back and forth we went yet. The well had a false info and other security staff came to our aid. That would otherwise have gone all day so. But I really have to say that the staff of the Security and who were also from Ankerberg really super friendly and helpful! 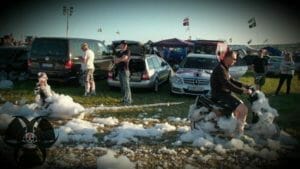 Since most cash register only opened at 9 clock we put in our reserved area (K) from the car and ran to an open cash register. We had paid in advance, but that we had to get there Admission band.

In our fenced tent area we were able to stand up to us where we wanted to. Since we had rented no electricity or extra toilet, we should not only make us right in front of a distributor. Thanks to a cheap folding tent a known discounter of construction of the tent went quite fast. We wanted also to see the first training and it was about time …

The Sachsenring MotoGP – the free practice sessions on Friday … 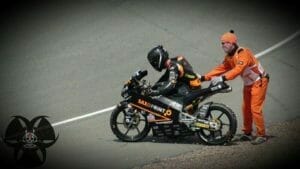 … Are a dream for motorsport enthusiasts. Friday is not so crowded and you can (at least briefly) also provide times directly to the fence at the bottom of the grandstand. Here of course you have the best view. But even in the stands even seen super because not so many obscure the view to a rum. 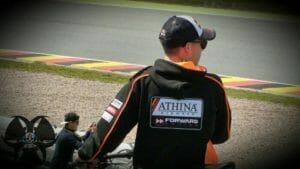 Stefan Bradl, the injured could not start, standing almost directly from me when I was filming on at once. I almost did not even notice it, because I was focused only on the viewfinder, but my better half has made me aware times shortly afterwards 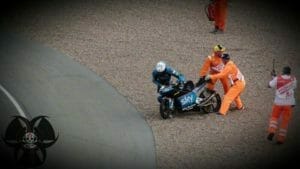 The occasional ride into the gravel I could hold on. Very interesting was the dispute of a driver with the marshals. Romano Fenati was after dropping his bike still absolutely roadworthy. The marshals saw it differently. Fenati could prevail for some time. I do not know whether this was also seen on television, but in the still upcoming video report there is definitely. Was great to see how he put up with three marshals. 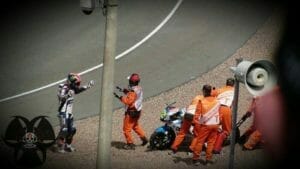 The marshals were, but partly also to petty. OK at Fenati the machine was bruised really badly, but on Saturday Sam Lowes had not immediately pushed a small sliders and he was back on track. He was the bike “taken away” and only at the end of the gravel bed, where the road was reattached, it has been found that the machine is still intact. He was allowed to get back on track … The audience acknowledged this with boos and whistles. Very good to see in the coming video …

The party at the Anker Berg – from very cozy to Ultra 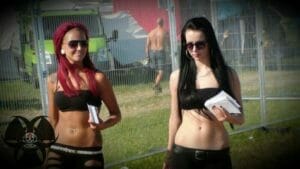 The Ankerberg has really a lot to offer. It is campground, popular festival and party area. But it is also the absolute chaos, unique and loud!

In order to provide one time immediately clear. It now comes perhaps something wrong or distorted over, you can also on the Ankerberg very quiet and peaceful camping. Many, some older people did. Here one must also be careful when you open your tent. In the area (K) where we were, it was really reasonably quiet.

OK, “calm” ticked – we come to the festival and the party area 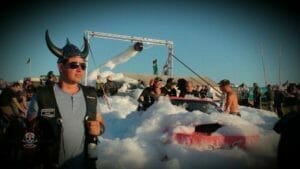 A few rides, like a bumper car and a sphere in which one could be catapulted into the sky were on site. Of course, there was a mass of food stalls and drink stalls. For the physical well so was worried. 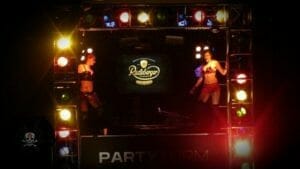 The anchor Berg was divided into different areas. In one part, there was a stage with live band. Then the party tower on which a DJ plays and partially GoGo`s danced. – Here even the rather rocky part was played. There was a range in the hip-hop was played – and there was still an area or not? No Idea … 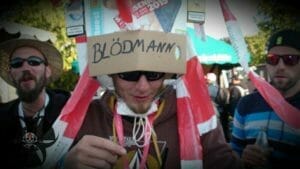 It was definitely for every taste. As varied as the music was of course the audience. There were also many curious figures. A Predator ran my way, I saw flashing braces, flashing Typ of grinding (worn by men) in the hair, normal types carrying a chicken on his head, people in a bathrobe … Finally back ordinary people!!!

In the coming video is also a lot to see here.

Then there were certain areas in the campground on the absolute chaos reigned. 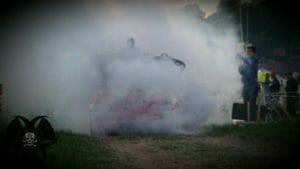 A foam cannon was built. Visitors, cars, quads, scooters … drove through the foam was really high piled. Partly the foam choked a simple. It was a lot of fun. Nearby a group had pitched their tent. A really big plant ensured the right music, naturally at the right volume

A self-knitted-together “Pink Cadillac” was seen turning his rounds on the campground. The bubble bath he took always liked true. He had therefore more cool his tires as he gladly times lay the occasional burnout. For this, a wooden plate was placed, as you would have taken care of on the grass only for holes. Burned has more. 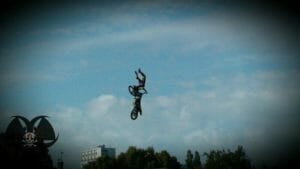 A very popular game was to hunt the engine to the limiter or provide for misfires. I was able to learn how you can take off the exhaust system without using a single tool … On the Ankerberg you learn for life

Actually, you ever heard a motorcycle in the limiter. Fireworks was always seen. Many took care of the necessary musical accompaniment. From techno to rock, children’s songs, or whatever else was also represented. Woke us up every morning with “Greek wine” 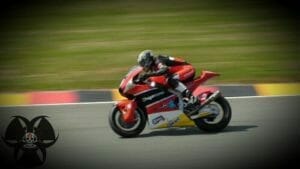 In short, it was just madness and it is too much to explain or tell. But this is only the first part here. What happens next you learn soon …

I do not even have a fraction of the experienced or there tells viewed one. It would also be far too much. However, I will draw up a detailed video report, but I have to split as this report. 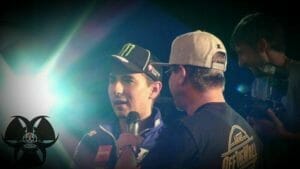 On display will be the goods from parts of the race or training, falls the driver what was seen on the Anker Berg that local people, crazy people, the drivers presentation, burnouts, misfires … You must not miss out this much I can ever betrayed! 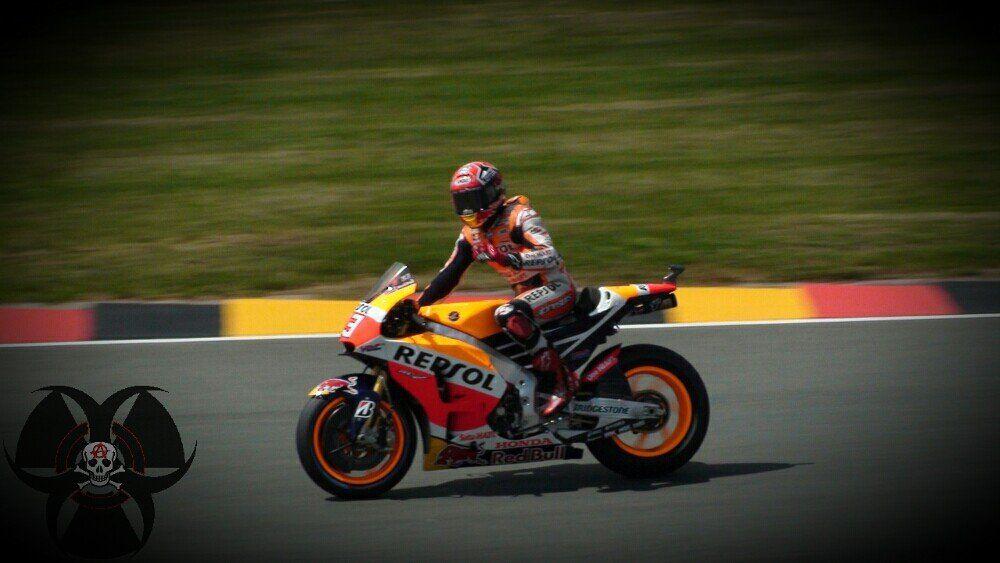