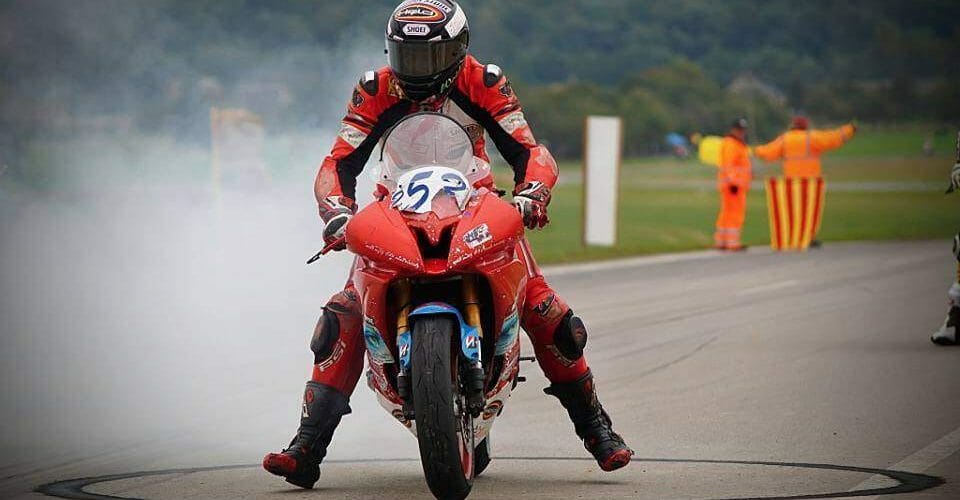 from the racetrack, Motorsport, Presentations, RoadRacing

Today there is an interview with Road Racer Wolfgang Schuster (Wolfi # 53). Despite his young age, he has already achieved a lot and also drove already on the Isle of Man. 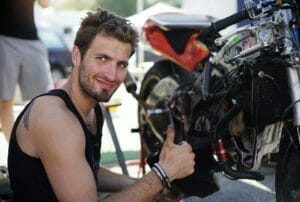 The interview with Wolfgang Schuster (Wolfi # 53) 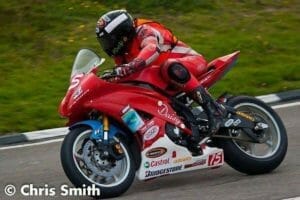 Wolfi: Yeah, right. I grew up with the 250cc 2-strokes. It’s been like ne-established couch or favorite shoes! I will continue to drive even with my 250cc and mainly with Daisy, my R6.

[sam id=”2″ codes=”true”]Wolfi: The 600cc is similar to drive like a 250cc. But the 250cc is handy, small and compact. Because it makes mad mood when you close small courses, with the R6 I have more fun when there are fast passages. Fast courses without stop and go get me very well. 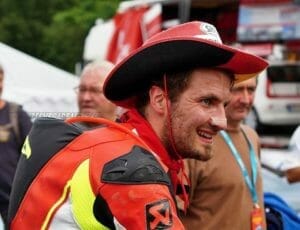 Wolfi: What? Hmm, good question. We are always driven to Frohburg since 2003. This went on until 2009, then a very good friend recommend the race in Horice/CZ. I was at the first appearance quite well go (grin) 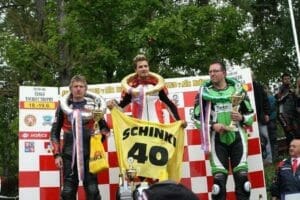 – Won 2011 for him there, he unfortunately died of his illness and it was always his dream to stand there on the podium. No one but me has expected a victory because Davy Morgen, a specialist on the TT and the 250cc, was there. And yes, 2012, I was then only on road courses on the go. Have in the year in the Czech Republic 250cc dominated, won 4 races 6 and placed 3 new lap records!

Wolfi: Oh, there was a 2014? No fun. This racing year I have now been analyzed and filed away – it was abysmal to say the least! 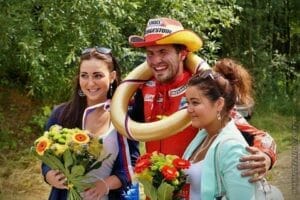 2015 I will find its former strength, and then a lot of fun to have a successful season … But I work almost every day, I assume all the Racing – eg where others celebrate Friday I go to the gym. On Sundays, when all their sleep it off on Saturday I go to the gym and so on.

Wolfi: No, the TT you need not necessarily be invited, that’s just in Macau. However, you should already can show one or the other of success. When ManxGp and the TT it is so that you can log in normally. But must be able to demonstrate success and a judging panel will decide whether you are “good” enough. 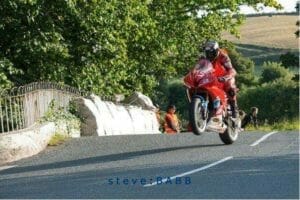 Nonsense, my original master plan was in 2015 to go with the TT.

Let’s see if the jury accepted me then I will go this year up there with the big boys together!

Wolfi: So to fairs I will not be. 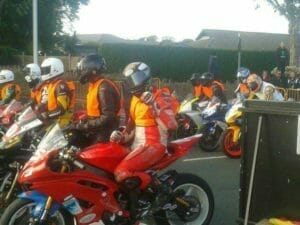 I begin in March in West France (Val de Vienne) with a week testing, then it goes straight to the 1000km race at the Hockenheimring. Yes these are both permanent racing, but somewhere one must work out … My ancestral race series is the International Road Racing Championship. In addition, I still go 2-3 races in Czechia. Well and when it works then the TT. Maybe even the Ulster GP.

Wolfi: Yes exactly, it is cost intensive. The club is about: Each of the “donate” an amount equal to at least 50 € buys a piece on my disguise. A signature of the owner comes to the point. Moreover, this person enjoys special features … 😉 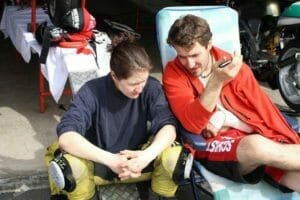 Wolfi: So Nadi / Natz is my sister. Which has all started racing (2000). Hah, at first she was better and I get some tips from, but since 2004/2005 so I’m better and I can always reciprocation with tips and advice … (pictured here)

Wolfi: Phew, what’s crazy? My father, my grandfather, my uncle and aunt are used to drive kart racing. But with motorcycle or even the road race had ever thing in the hat…

Wolfi: No, it has a very simple reason – through many falls, which happens sometimes, the toe was so badly damaged that it started to solve the sole of the boot. If you drive 240 km / h can already be breezy then. We have also tried with cold metal to mend it … 😀 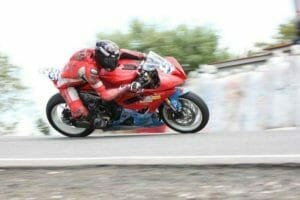 Wolfi: Phew, I have not a single favorite track. I like the fast stuff – such routes as Horice / CZ, Frohnburg, Hengelo / NL, but clearly I love the Isle of Man, with its mountain Cours! 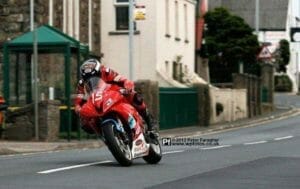 Wolfi: There’s only one thing – a lot of driving, have fun and let make no pressure. If you loose, you notice everything easier. Do not give so much on any of these counter chatter. Stay calm and focused. 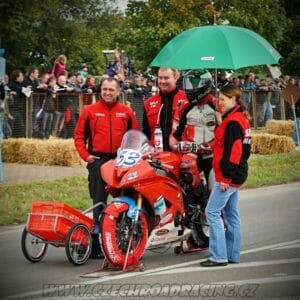 Wolfi: Hey, you and everyone else will laugh, I only have the A1 license. So go private cars only – because I have a Fiat Ducato Hymer converted into a camper, ingenious part. And otherwise, all my former and current motorcycles are in the workshop! And I’m looking forward to getting with Daisy or the small 250cc to go.

Thank Wolfi, for the interview! I wish you a successful and most of all injury-free season!

For those who know more of Wolfi and want to stay up to date, looking at schuster-road-racing.de and follow him on Facebook. A Youtube channel it will also set up soon. If you want to get into the 50 Club …

Again on Horsemen-of-Akocalypse.com still a lot of Wolfi #53 will be read! 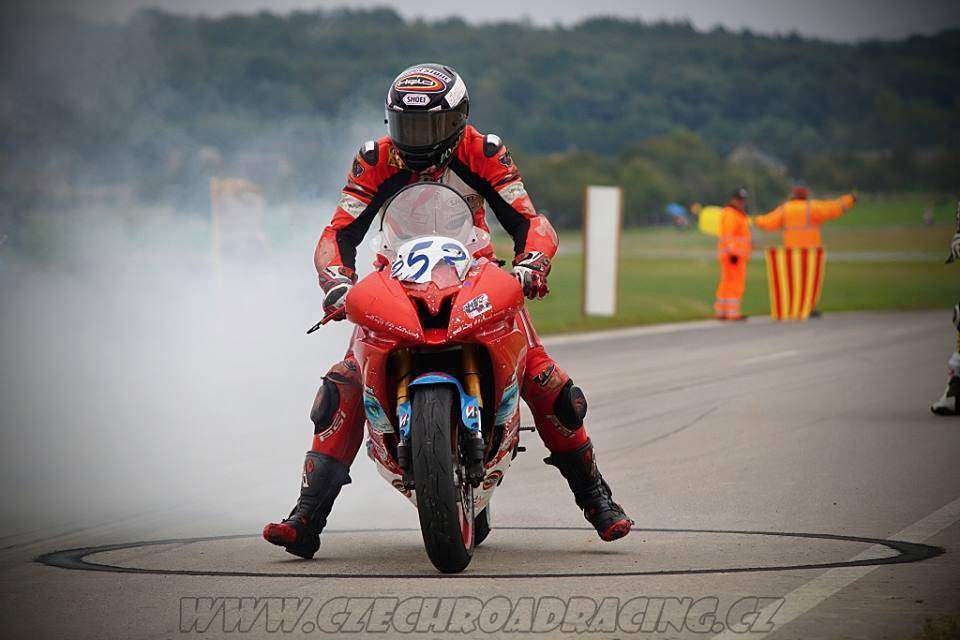