This weekend, there is another hard enduro race. The famous Erzbergrodeo takes place in Austria.


[sam id=”2″ codes=”true”]Drivers from all over the world and all age classes compete in this extremely hard race, with only a handful of riders coming to the finish.

1500 drivers go into the Prolog. Full throttle against the mountain, on selective gravel roads to the summit. Here is actually everything drive which is in technically perfect condition. On the up to 30 m wide and 13.5 km long track looks beside Enduros also Quads, scooters, sidecars and even road motorbikes.

Only the 500 best can start on Sunday at the Red Bull Hare Scramble.

Everything is required here. Courage, fitness and a lot of driving. But the most important thing is the head, which has no chance at the hardest off-road day race in the world. The route on the mountain changes every year, just like the mountain itself, because mining is still going on there.

23 Checkpoints must be run. 4 hours have time for this. – And most will not see the goal.

With three Red Bull Hare Scramble wins to his credit Jonny Walker returns to the Iron Giant this year having been forced to watch the ErzbergRodeo last year following an injury. Fired up and 100% healthy his goal is to challenge for a fourth Hare Scramble crown. Last competing in 2015, Walker did the double – posting the fastest time in the prologue before going on to be named as one of four winners together with Graham Jarvis, Andreas Lettenbichler and Alfredo Gomez. Jonny’s previous victories came in 2014 and 2012.

KTM’s highest placed rider in the Red Bull Hare Scramble in 2016, Alfredo Gomez heads into this year’s event in impressive form. Despite a number of small falls in recent events hampering his final results, Gomez knows he has both the speed and experience to challenge for a podium result.

Joining both Walker and Gomez is Cody Webb – the first ever American to finish on the podium at Erzberg with his runner-up result in 2016. Carrying great form into this year’s event having finished as a strong runner-up to Graham Jarvis at Red Bull Minas Riders in Brazil, Webb will be looking to go one-better than his 2016 Erzberg finish and challenge for the win.

Also, competing in the prologue will be Red Bull KTM Rally Factory Racing team rider Mathias Walkner, who will participate on his KTM 450 Rally machine. Dakar Rally runner-up, Walkner, who topped the warm-up Rocket Ride event in 2014, will unleash his powerful rally bike as he goes all-out to post the fastest time up the 13.5km prologue.

The 23rd running of the ErzbergRodeo starts on Friday, June 16th with the Red Bull Hare Scramble taking place on Sunday, June 18th.

The Red Bull Hare Scramble will be broadcast live, for more info check out the KTM Factory Racing Facebook page for details.

Jonny Walker: “I can’t wait to get racing at Erzberg this year. In some ways it feels like this year’s race has come around sooner than in previous years, but I’m really looking forward to getting back on the mountain and lining up for my first prologue run. Not racing at Erzberg last year due to injury was really tough but being back there a few weeks ago for KTM’s 2018 EXC TPI launch was special – it was just cool being back there – but nothing compares to the atmosphere, the craziness of racing at the ErzbergRodeo. No one ever knows what to expect when it comes to the course, the weather and how everything will pan out, but that’s part of what makes Erzberg so special and such a huge event. I feel good at the moment and after finishing on the podium at Lagares in Portugal recently I’m definitely fired up. The goal for the prologue is the same as always – to get safely to the top of the mountain and onto the front row of the start. After that it’s just to try and make as good a start as possible, keep my head down and keep pushing all the way to the finish.”

Alfredo Gomez: “Erzberg is the big one, and this year I really have a lot of motivation to do well. Even though I won the prologue at Red Bull Minas Riders in Brazil recently things didn’t go how I hoped they would there. Also, at Extreme Lagares I won the prologue and was riding well but a crash stopped me fighting for the win. So, I really want to do well. Last year I was fighting for second almost all the race with Cody. This year will of course be difficult – it always is at Erzberg – but I’m riding well and I’m focused on another Erzberg podium.” 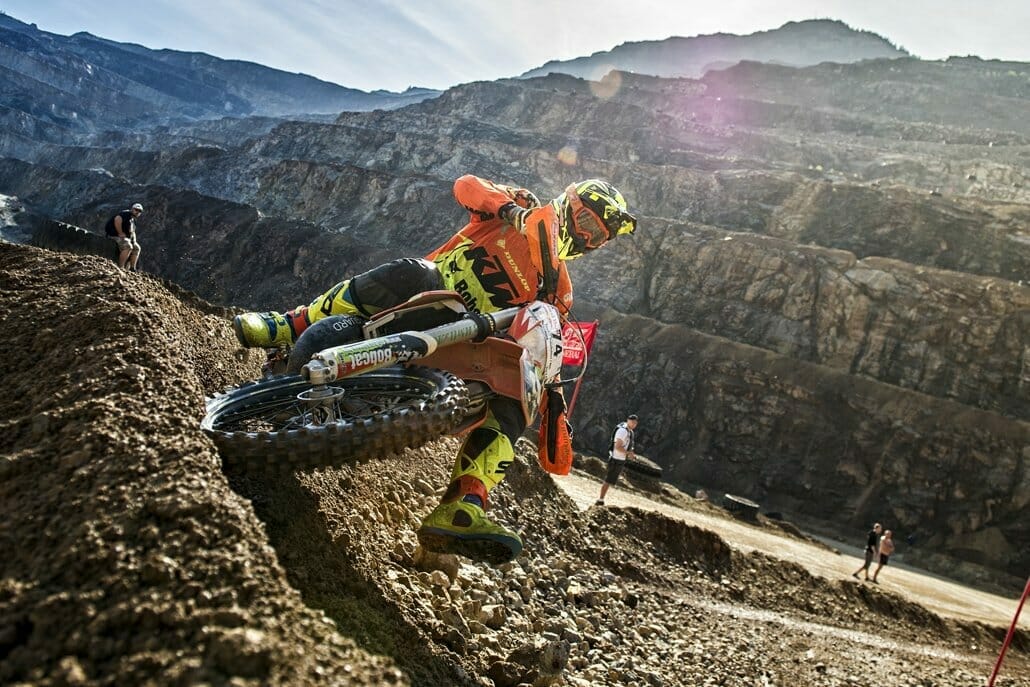